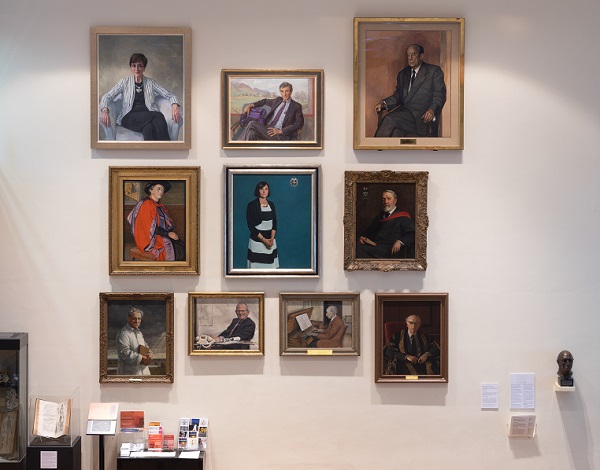 The Royal College of Physicians (RCP) owns a diverse collection of 20th century portraits. The Osler wall display shows how prominent figures in medicine have chosen to be painted in increasingly modern styles.

From women presidents and RCP officers, to a king’s physician and a WW1 colonel, the personalities here all contributed to the world of medicine today. Their achievements include reducing health inequalities, lobbying for women to become fellows and challenging the gender pay gap.

The RCP is one of very few organisations that still commissions portraits of its presidents – several are on display here. In contrast to the earlier portraits in the RCP’s collection, 20th century presidents began to favour individuality over prestige. Symbols of authority, status and ceremony are replaced by informal compositions and objects that reveal the sitter’s personality beyond their role as physician: a Nobel Peace Prize winner, an accomplished pianist, a lover of the outdoors. 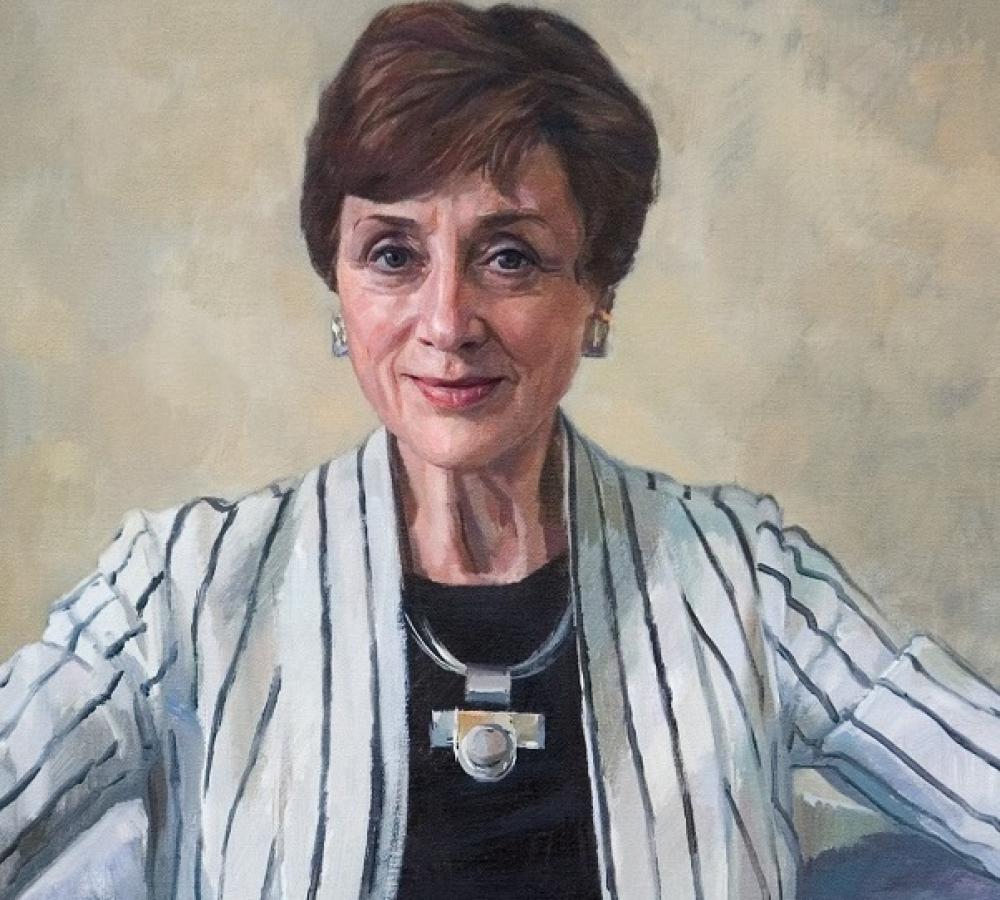 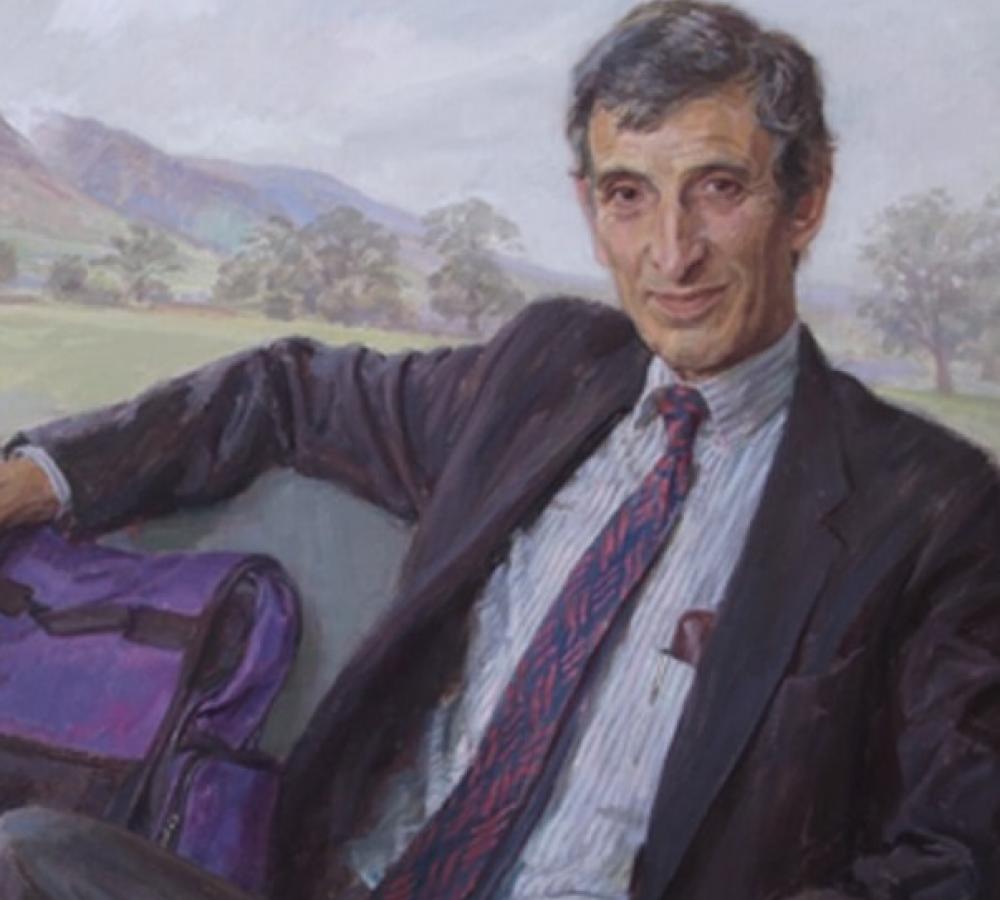 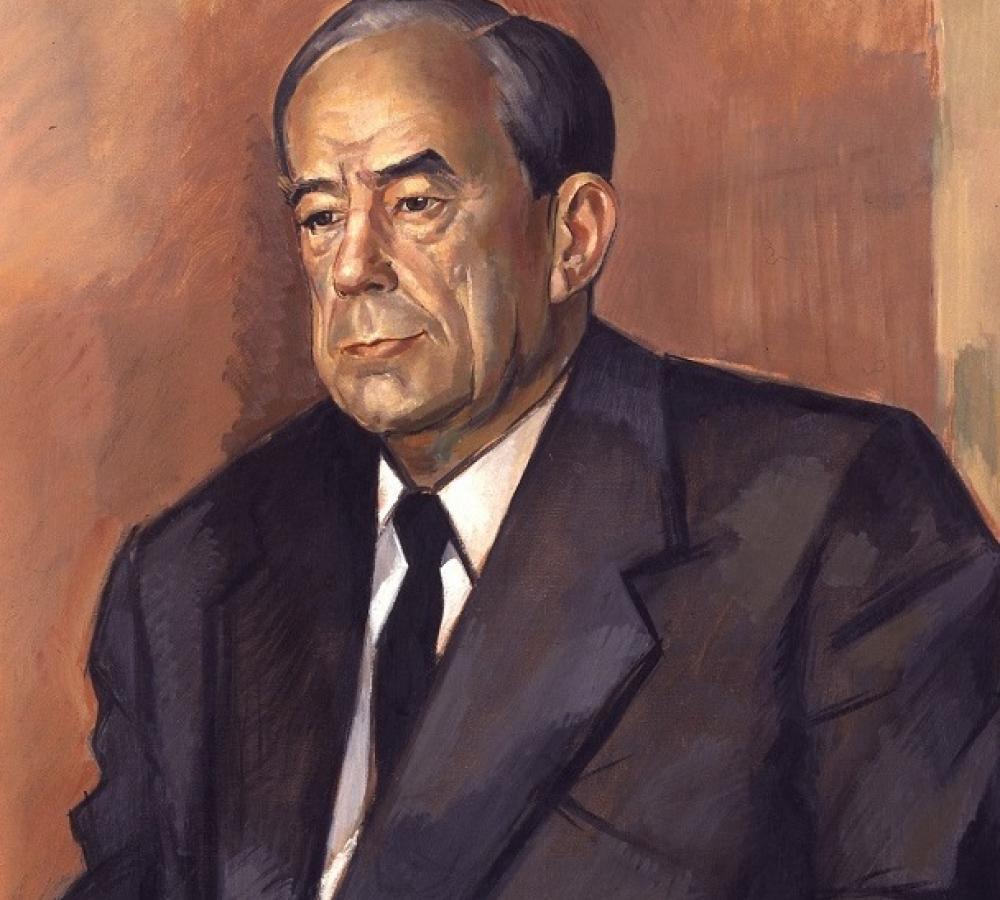 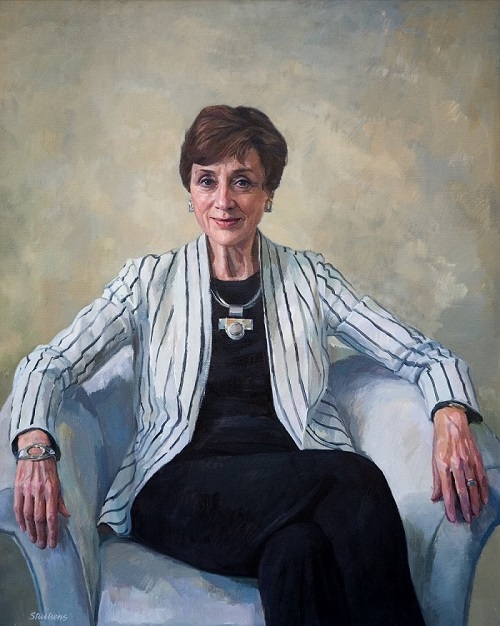 Oil on canvas by Jeff Stultiens, 2006

Since the 1940s, the RCP has commissioned portraits of every outgoing president. Professor Dame Carol Black was only the second woman president of the RCP (2002–6), but she chose not to wear the traditional robes of office for her portrait. In a 2006 interview with the RCP’s curator, Black explained that:

‘I tried to professionalise and modernise the College, so there didn’t seem any point in being dressed up ... I think it has captured some aspects of leadership ... The important thing for me was to have an image that was of a modern woman holding a pretty major job.’

Black pursued an academic career in rheumatology and was medical director of the Royal Free Hospital. She has advised the government on health and work, and has been principal of Newnham College, Cambridge, since 2012. As RCP president, Black was concerned with how women doctors could achieve a balance between their work and family life. Today she regularly speaks about women and leadership.

Black chose the artist Jeff Stultiens (b.1944) to paint her. Stultiens is a member of the Royal Society of Portrait Painters, and has painted many notable people including HM Queen Elizabeth II. 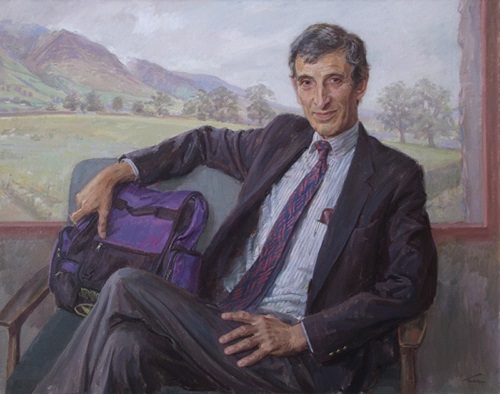 When RCP president Professor Sir George Alberti sat for his presidential portrait in 2002, he wanted the viewer to appreciate a different aspect of his life: his love of the outdoors. The president’s traditional symbols of authority – the caduceus, mace and robes – have been replaced by a backpack and a countryside view.

Alberti has worked extensively on diabetes, writing numerous research papers and serving on many national and international committees. In the 1970s, he pioneered the management of diabetic ketoacidosis, a serious metabolic emergency for sufferers of severe insulin deficiency.

Alberti was dean of medicine at the University of Newcastle upon Tyne (1985–2002), and professor of metabolic medicine at Imperial College London (1999–2002). More recently, he served as national clinical director for emergency access (2002–9), making significant changes to emergency care in the UK.

Australian artist June Mendoza OBE (b.1924) has painted royalty, prime ministers, sports personalities and celebrities. She is a member of the Royal Society of Portrait Painters and the Royal Institute of Oil Painters. 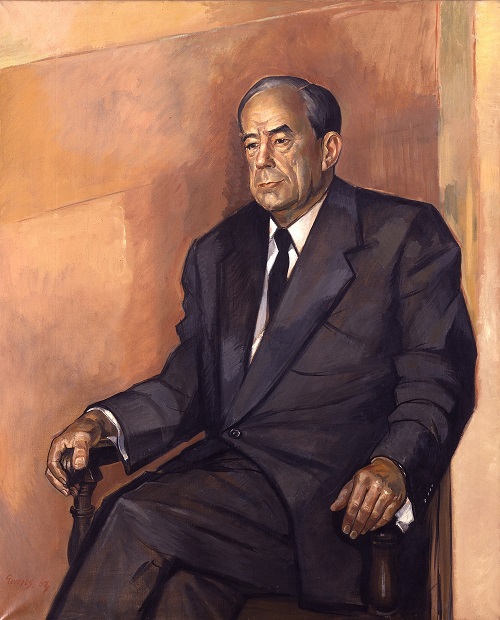 Lord Robert Platt was president of the RCP from 1957–62. He instigated the RCP’s move from Pall Mall East to Regent’s Park, working closely with the architect of the new building, Sir Denys Lasdun (1914–2001).

Platt was the first full-time professor of medicine to become president. He was responsible for the RCP’s progressive interest in postgraduate education and preventative medicine, and wrote over 90 papers on a wide range of medical subjects.

In contrast to earlier presidential portraits, Platt does not face the viewer, and he is not wearing the president’s formal robes. Nevertheless, there is no mistaking the power of his position – his commanding pose, grave expression and dark suit combine to create a sense of gravitas and authority.

Abstract painter, printmaker and sculptor Merlyn Evans (1910–1973) painted Platt in 1963. Evans studied at the Glasgow School of Art before travelling through Europe and meeting artists such as Piet Mondrian, Wassily Kandinsky and Max Ernst. Evans’ abstract painting style, with bold colour blocks in the background, firmly places this painting in the 1960s. 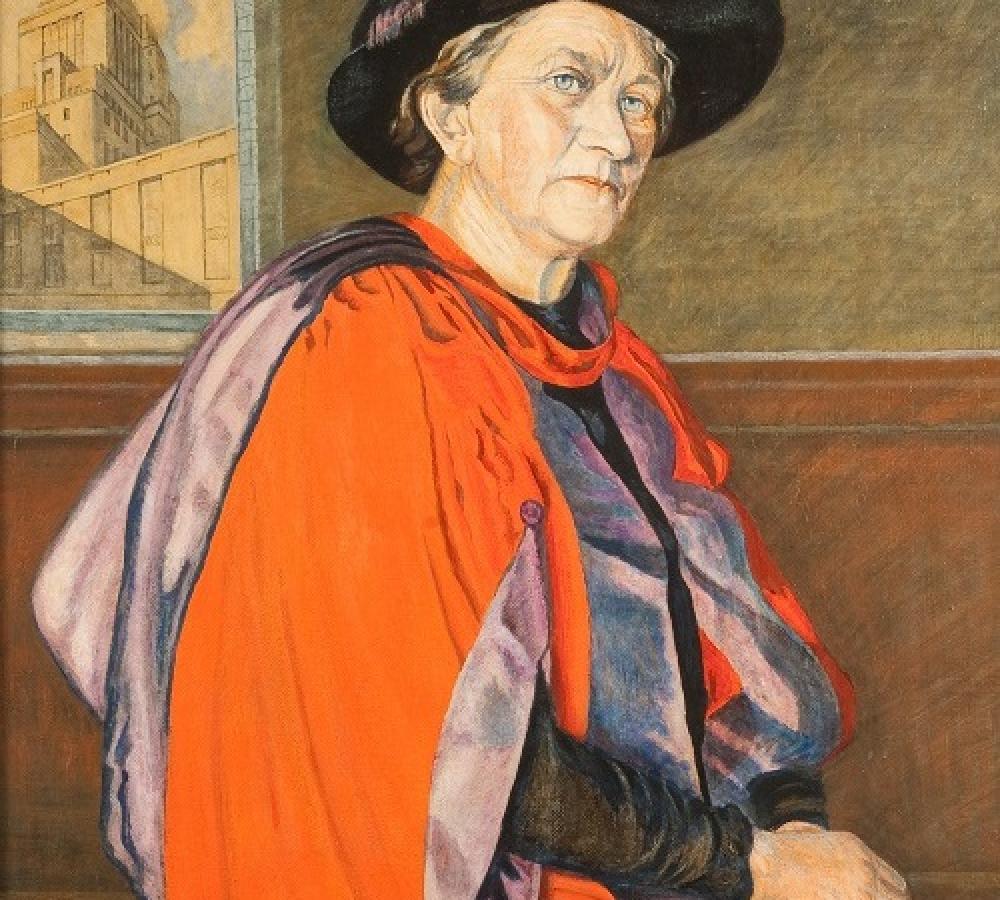 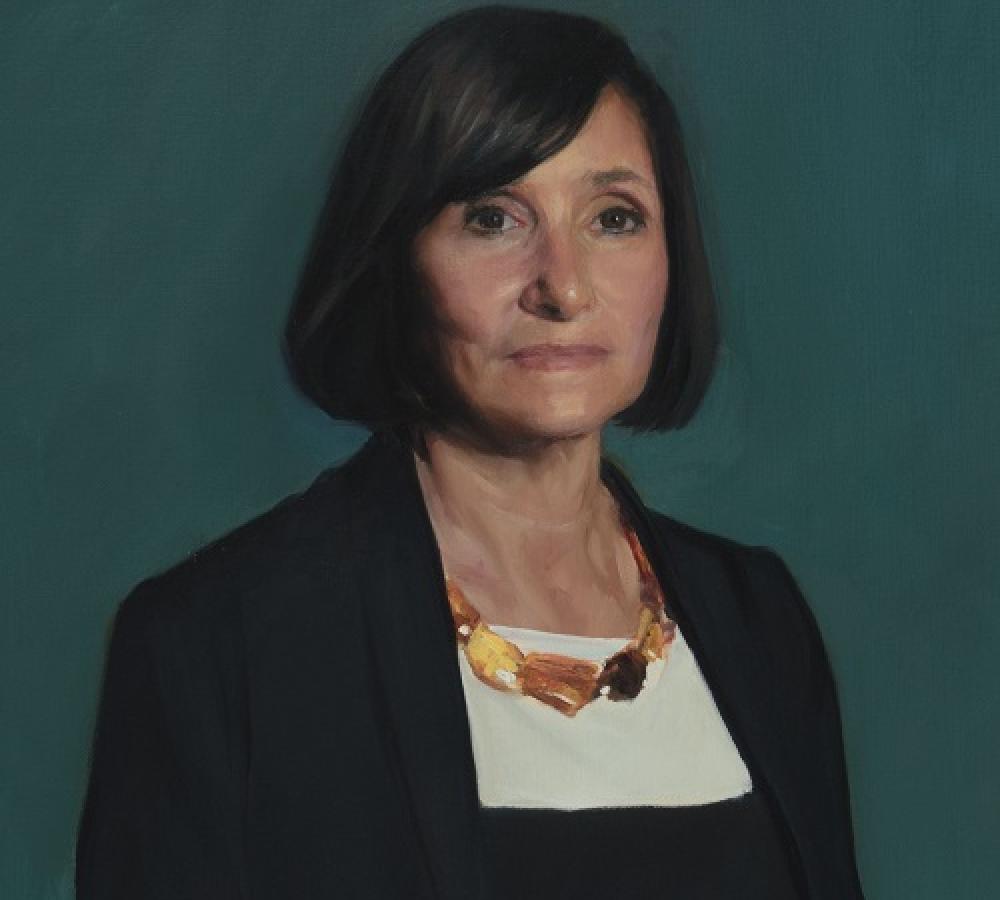 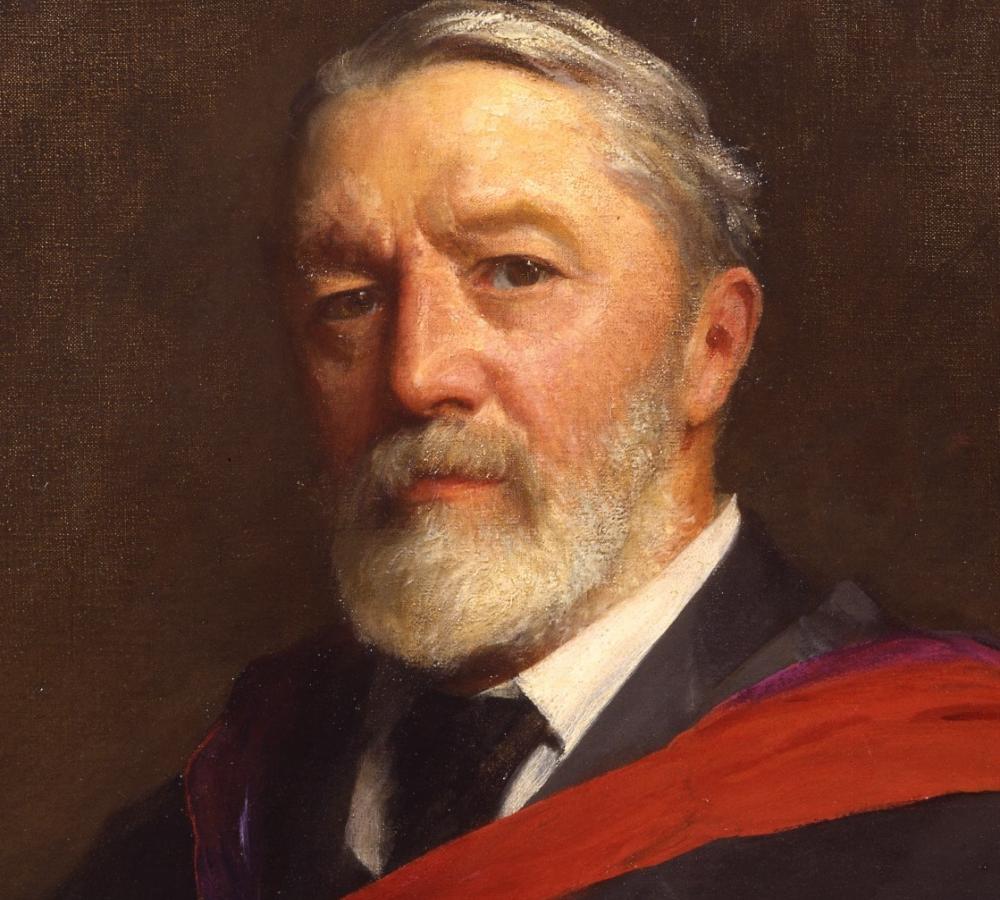 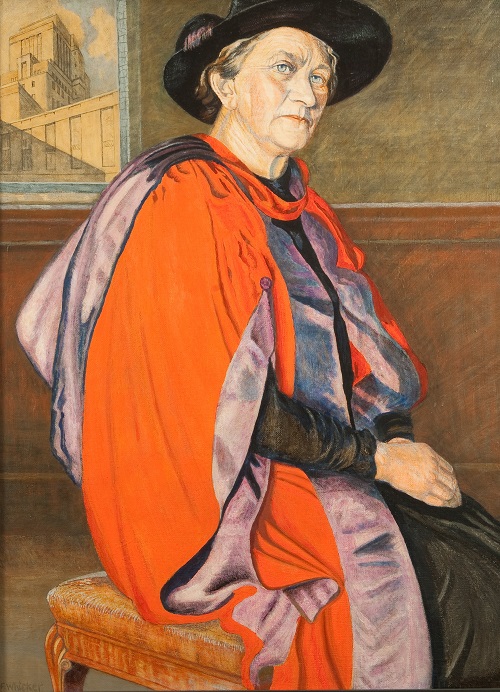 Painted in striking academic robes of orange and purple, the RCP’s third female fellow Dorothy Hare looks down upon the viewer in an imposing and authoritative way.

During her career Hare held positions at the Royal Free Hospital, and the Elizabeth Garrett Anderson Hospital, London. At the request of Dr Louisa Aldrich-Blake, dean of the LSMW, Hare sailed to Malta in 1916 to serve with the Royal Army Medical Corps. Two years later she became general medical director of the Women’s Royal Naval Service, the ‘Wrens’, and received a CBE in 1919. Hare was elected fellow of the RCP in 1936.

While working with the Wrens, Hare witnessed the suffering of many women with venereal diseases. She went on to found two hostels for affected women, including pregnant women who were refused care by mother and baby homes. 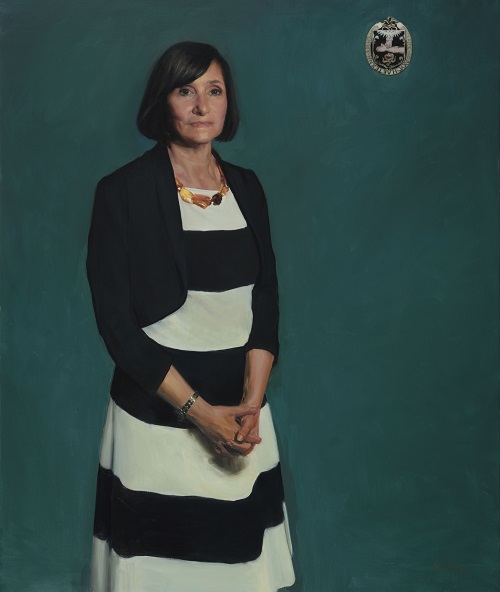 Paul Benney’s painting marks the end of Professor Dame Jane Dacre’s RCP presidency in September 2018. Benney drew inspiration from the works of the 16th century portrait painter Hans Holbein the Younger. This is evident in Dacre’s pose, with her hands clasped in front, and the use of a single, richly-pigmented colour in the background.

After training at University College Hospital Medical School, Dacre undertook research and training in general internal medicine and rheumatology at St Bartholomew’s Hospital and Medical College, graduating with a postgraduate MD in 1992.

Dacre has devoted much of her career to the training and assessment of doctors. She was medical director of the membership of the RCP (MRCP) examination, and also chair of the General Medical Council’s Education and Training Committee, 2008–12. She served as director of UCL Medical School until her election as RCP president in 2014.

Dacre has worked to support diversity in the medical workforce, with an interest in how gender and ethnicity can affect career paths. In 2009 she chaired the research group which published the report Women and Medicine: The Future. As of 2018 she has lead a review into the gender pay gap in the NHS. 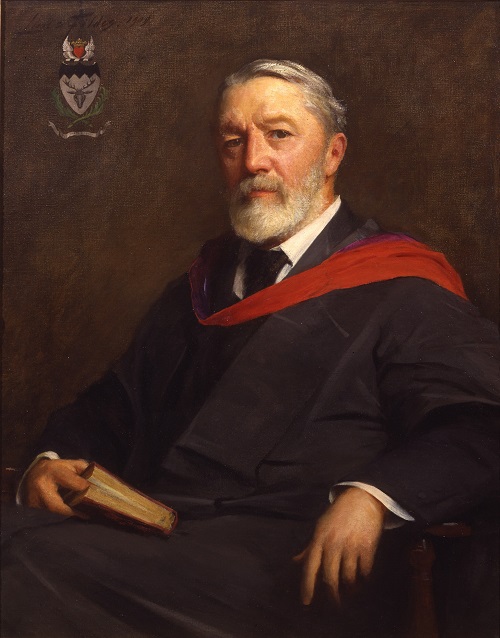 Paris-born William Allchin studied medicine at University College London, qualifying in 1869. He lectured on many medical disciplines including anatomy, physiology and pathology at Westminster Hospital, where he later became dean (1878–83; 1890–3).

Allchin held several offices at the RCP including senior censor and assistant registrar, and between 1891 and 1905 delivered the Bradshaw and Lumleian lectures, and the Harveian Oration. He was a member of the Medical Consultative Board to the Admiralty and an examiner for the Army and Navy Medical Departments. After receiving a knighthood in 1907, Allchin became physician-extraordinary to King George V.

The earliest painting in this hang, this portrait at first glance appears to belong to the formal painting traditions of the previous century. Allchin’s pose is authoritative, he holds a book to indicate his learning, and the dark colours add solemnity. However, his expression engages the viewer with an almost questioning look, betraying a hint of his personality. 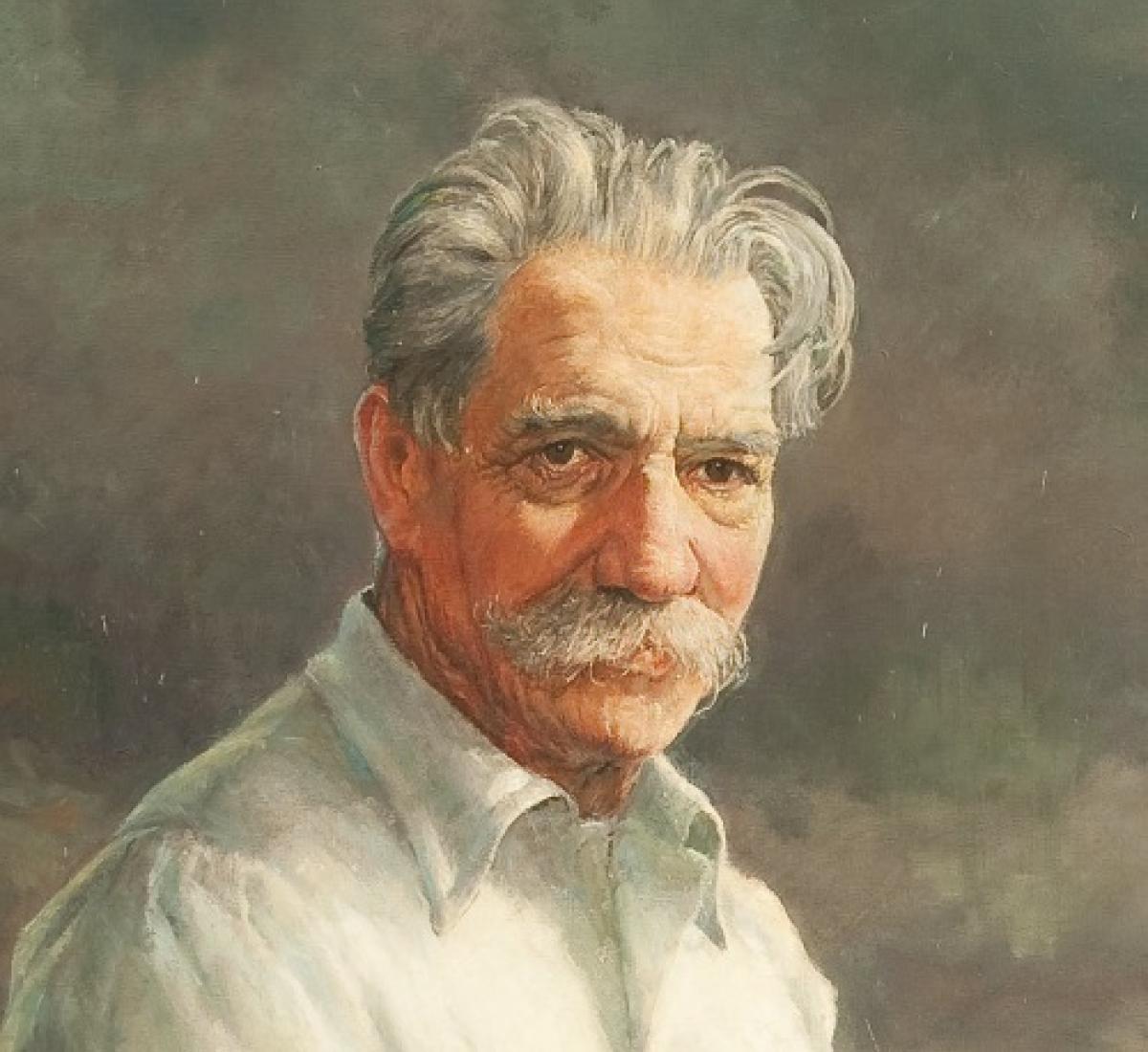 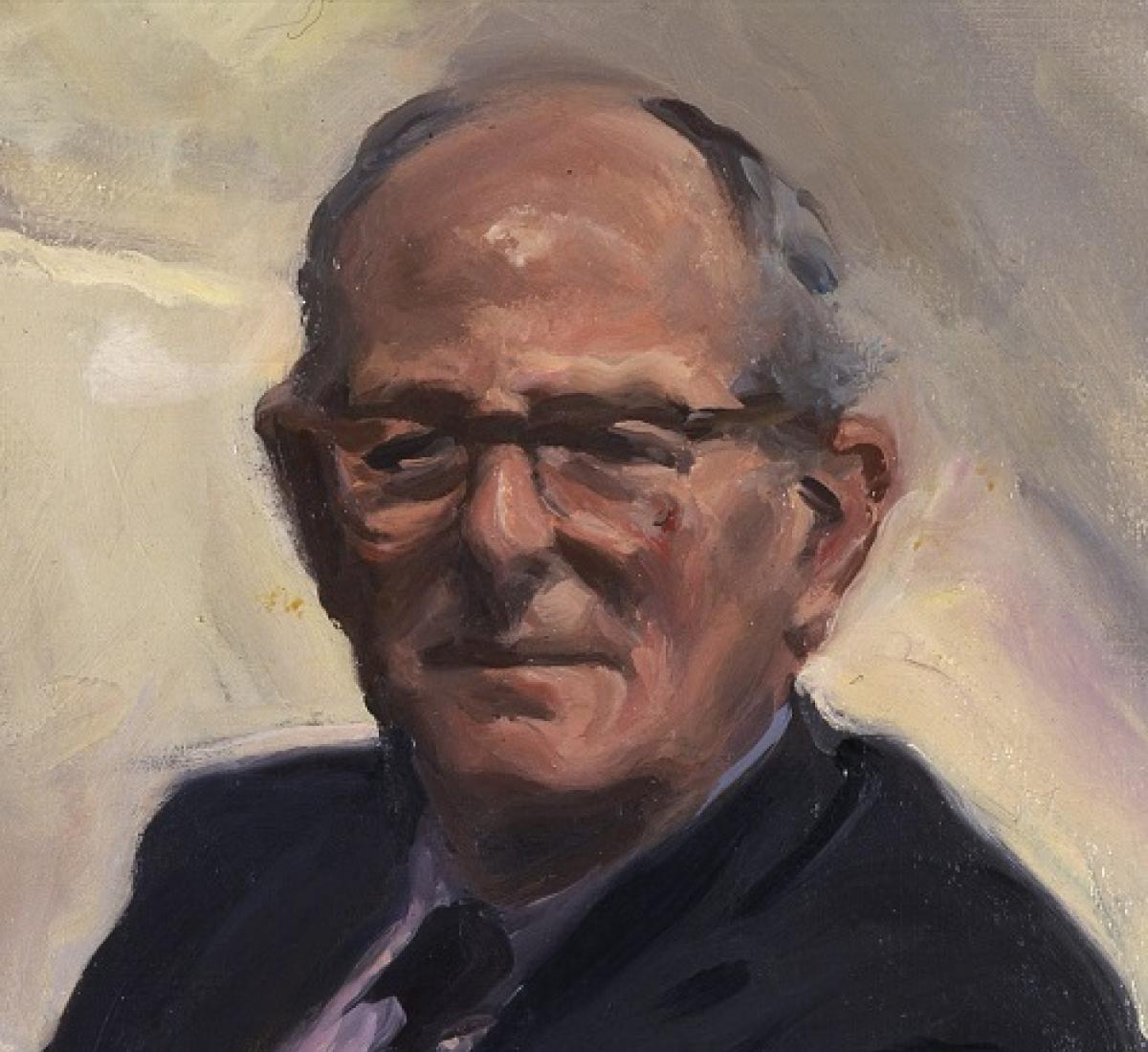 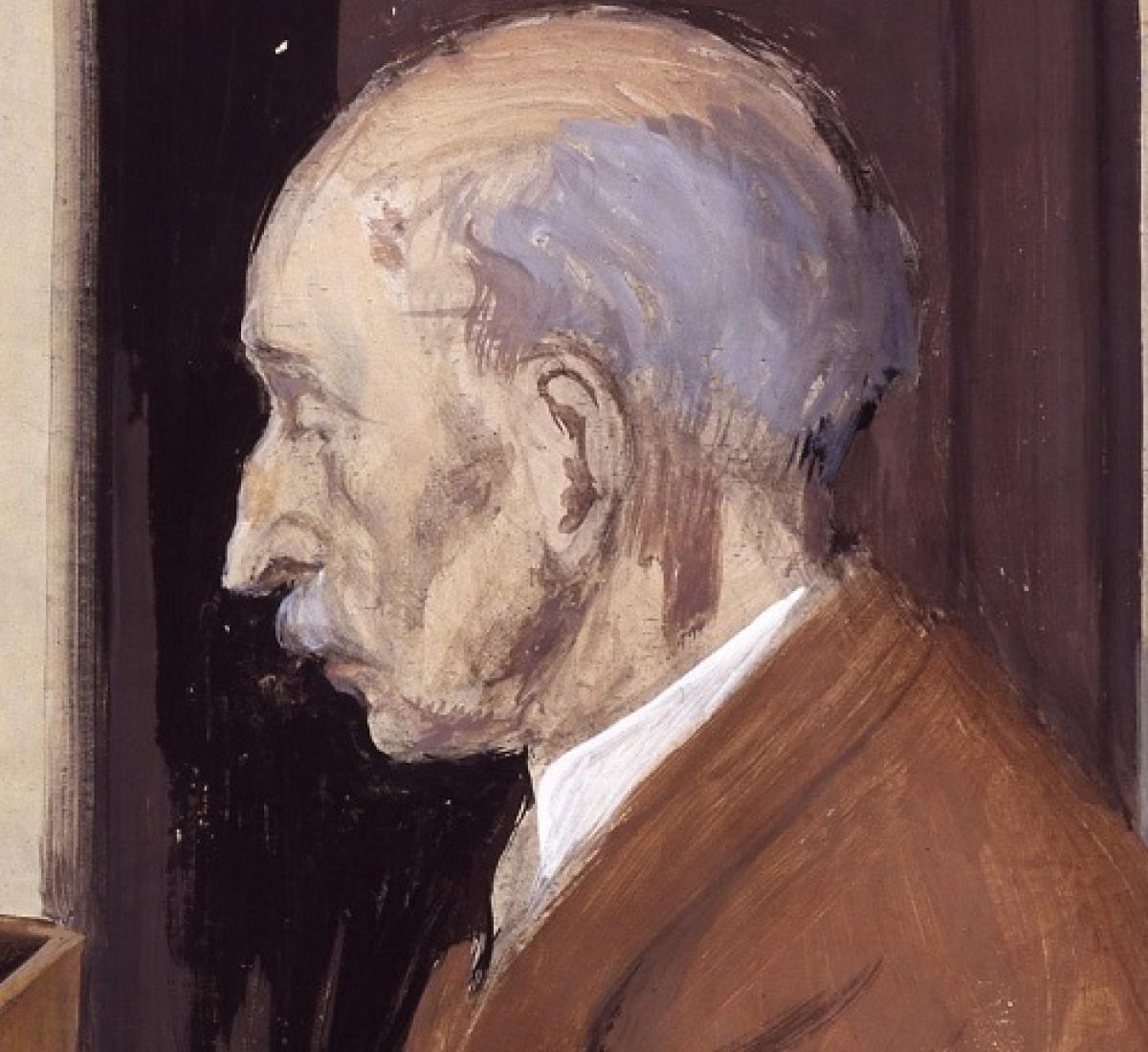 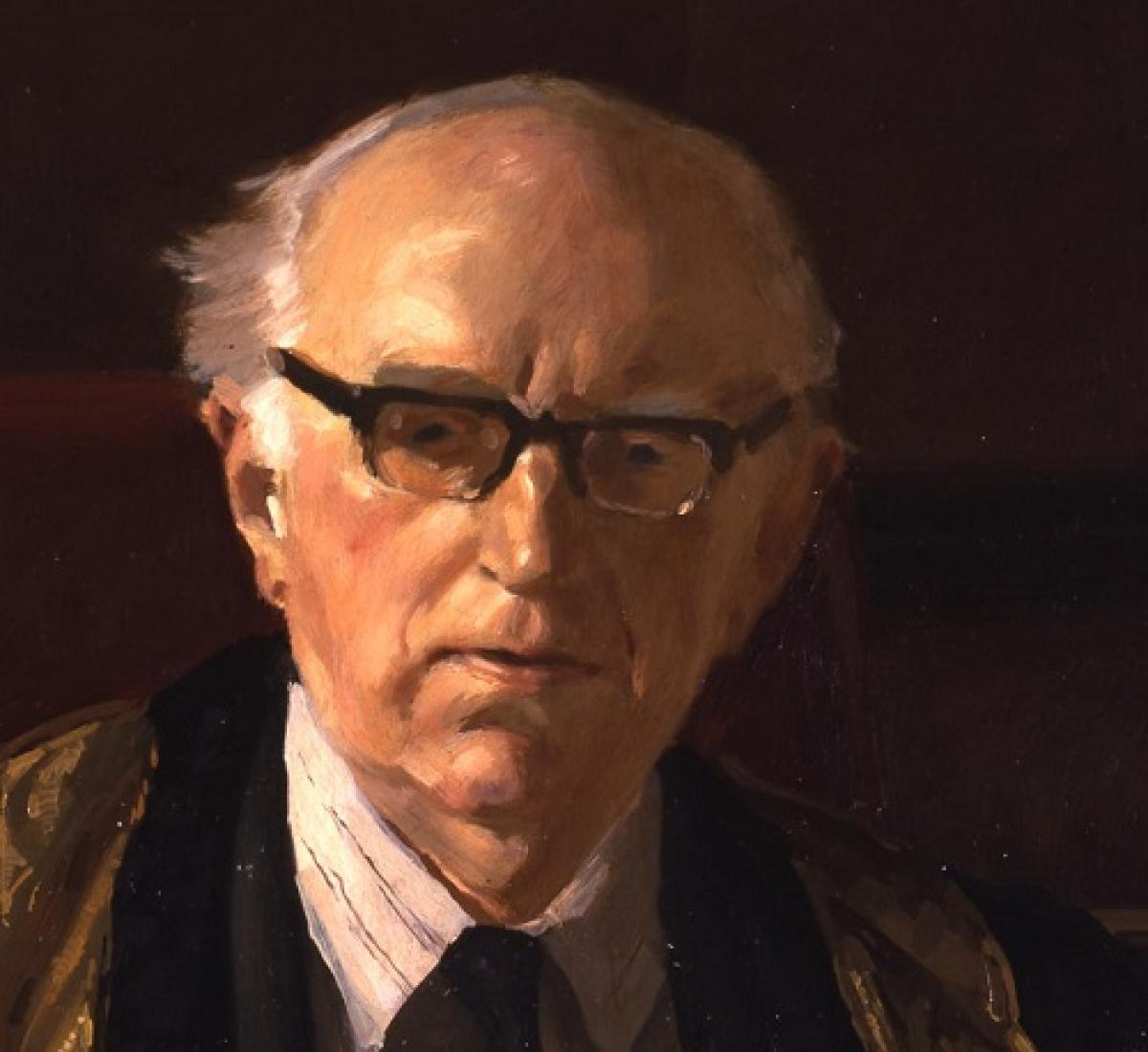 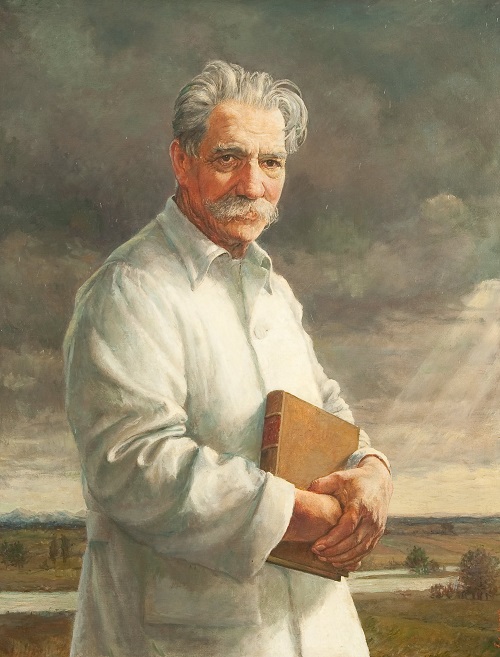 Alsatian-German Albert Schweitzer began his career as a theology student at the University of Strasbourg and a preacher. He also built a distinguished musical career as a renowned concert organist.

Performing enabled Schweitzer to self-fund his later medical degree, which he began at the age of 30. After qualifying in 1913, he funded the building of a hospital in Lambaréné, French Equatorial Africa (present-day Gabon), where he worked as a medical missionary.

After a year spent as a prisoner of war in France (1917–18), and several years travelling, preaching, lecturing and writing in Europe, Schweitzer settled in Lambaréné in 1924. He funded the expansion of his hospital to over 70 buildings, with a capacity for 500 patients.

At Lambaréné Schweitzer was a doctor and surgeon, a pastor, a village administrator, a superintendent of buildings, a writer and a musician. He received countless honours and honorary doctorates, and in 1952 won the Nobel Peace Prize for his life’s work. With the prize money he built a hospital at Lambaréné for people with leprosy.

Felix Szczesny Kwarta has represented Schweitzer in the typical attire of his most well-known role – the white coat of a doctor. Behind him are the plains of French Equatorial Africa. 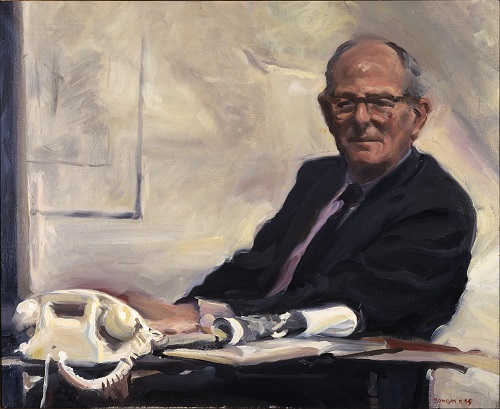 Nigel Compston was a very popular physician and an exceptional administrator – perhaps this is why he was painted sitting behind his desk. He made a considerable impact during his 15 years as treasurer of the RCP.

After gaining his MD and passing the MRCP in the same year, Compston joined the British Army. By the end of World War II he was a lieutenant colonel responsible for the health of the British garrison in Berlin.

In 1948 Compston returned to Middlesex Hospital as a research fellow and later assistant professor. His work focused on multiple sclerosis, a subject which he later jointly authored a book on.

Compston was appointed consultant physician at the Royal Free Hospital in 1954, where he worked until retirement. He was highly regarded by his colleagues, students and patients. He oversaw the move of the hospital from Gray’s Inn Road to Pond Street, Hampstead, where there is a ward named after him.

In 1957 Compston became a fellow of the RCP. From 1970–85 he served as treasurer, working hard to secure the RCP’s finances. He initiated public appeals for funds, and purchased the leases for the conversion of the terraced houses in St Andrews Place. 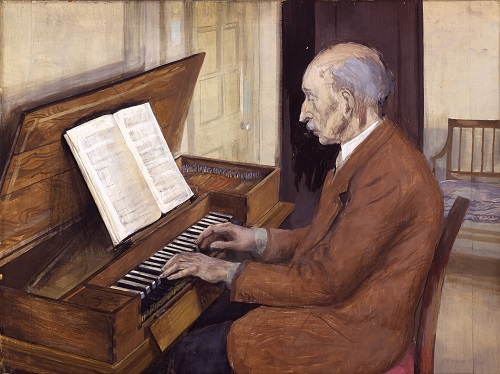 Tempera on board by Muriel Jackson, date unknown

Physician Arthur Phear was an accomplished pianist and organist. He was painted by the artist and wood engraver Muriel Jackson at his clavichord, which had been made especially for him by the famous instrument makers, the Dolmetsch family of Haslemere.

While serving as councillor for the RCP, Phear helped change the bye-law which excluded women as fellows from the RCP. The decision to admit women was reached in 1925, and the motion was passed by 20 votes to 12. In 1907 Phear said that ‘every woman member ought to be able to look forward to being a fellow’.

During the First World War, Phear was a consulting physician to the British Salonika Forces and the Army of the Black Sea. He was awarded the CB in 1919 for his dedication to his work, which he carried out despite frequent malaria and typhoid epidemics in the region.

Phear was also examiner in medicine for the Universities of London and Cambridge. He was a very popular teacher, and organised and conducted many concerts and performances by the Students’ Choral Society during his time at the Royal Free Hospital. 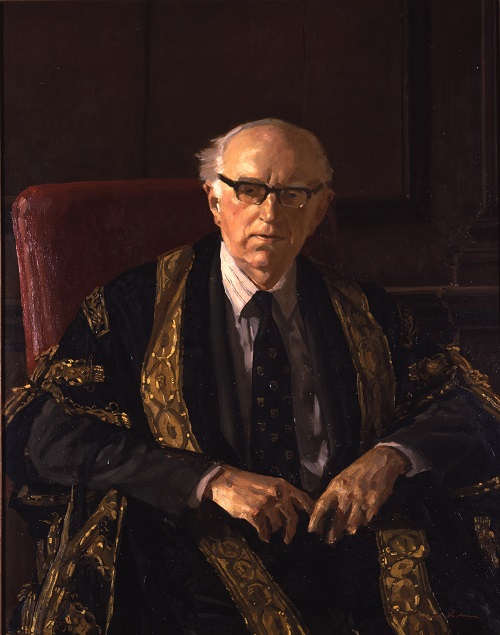 Oil on canvas by Richard Foster, 1983

Douglas Black was chief scientist to the Department of Health (DoH) from 1973–7, and president of the RCP from 1977–83. He is best known for his influential 1980 report for the DOH, known as The Black report, which found that social deprivation was a significant reason for health inequality in the UK.

Black studied medicine at St Andrews University before working at Dundee Royal Infirmary. In 1942 he joined the Royal Army Medical Corps and was posted to Sierra Leone and India. When he returned to England in 1946 he became lecturer and later professor of medicine at Manchester University.

Black’s long-standing medical interest was nephrology – the specialty concerned with the kidneys. He made contributions to the treatment of renal failure, and co-wrote a study on the effects of potassium depletion in cell metabolism.

Black was the last male RCP president to be represented in the presidential robes. The formality of the portrait, with Black’s attentive pose and the dark, sombre colours, are perhaps an appropriate choice considering the gravity of his findings published in The Black report.