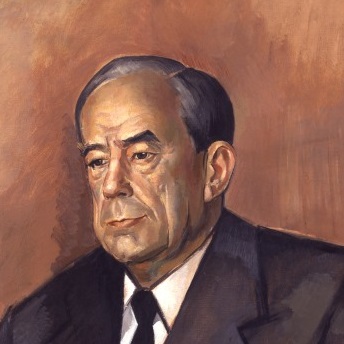 As the man mainly responsible for the move of the College house from Pall Mall East to Regent’s Park, Robert Platt has an assured place as one of the College’s great presidents. He was also the first wholetime professor to hold the office; the first president to live and work outside London, and the man mainly responsible for the College’s renewed and greatly increased interest in postgraduate education and in preventive medicine in the second half of the twentieth century.

He was born in the parish of St Marylebone, the second son in a family unconnected hitherto with science or medicine, but infected as he himself said, with ‘music, the stage and the wanderlust’. His father, William Platt, worked for some time in the family wholesale woollen business (though probably more interested in music and other pursuits) but later with his wife Susan Jane, née Willis (daughter of William Willis, a much travelled Scot who eventually settled in Forfar), founded a co-educational boarding school in Grindleford, Derbyshire. Susan Willis was the first woman to become one of HM Inspectors of Schools. An uncle was a close friend of Keir Hardie, and Robert was a cousin, through his father’s mother’s family, of Portia Holman FRCP (q.v.), who was involved in the Spanish Civil War.

Robert was educated at King Alfred’s School, Hampstead; at his parents’ school at Grindleford and at Sheffield University, where he qualfied MB BCh (with two gold medals) in 1921 and became an MD in 1923. He took the MRCP in 1925 and was elected FRCP in 1935. In later years he received many honorary degrees including Hon LLD Sheffield 1959, Belfast 1959, Manchester, 1969, and Hon MD Bristol 1959. He was created Baronet in 1959 and became a Life Peer as Baron Platt of Grindleford in 1967.

He was appointed assistant physician to the Royal Infirmary Sheffield in 1931 (at the age of 31) and full physician in 1934, rapidly acquiring a considerable private practice. He was later to describe this as ‘professionally the most satisfactory period of life’.

Platt served in the RAMC as a lieutenant colonel, OC Medical Division, from 1941 to 1944 in Britain, North Africa and Italy, and records that his promotion to brigadier consultant physician, Southern Command India, did not greatly please him, for after his experiences in North Africa and Italy he found the quasi-peacetime atmosphere of Indian clubs and messes to be distasteful. Others who served in India remember him as an energetic and dedicated consultant physician, if a somewhat bedraggled brigadier.

Wartime service seemed to have converted Platt the successful consultant physician, to Platt the socialist and enthusiastic supporter of the NHS (who resigned from the BMA in 1947 and never rejoined), Platt the humanist and, after much heart searching, Platt the wholetime professor of medicine. He once said that he thought he was awarded the chair of medicine at Manchester in 1946 because he told the appointments committee that he was not sure whether he really wanted it.

When he arrived in Manchester the space allotted for his department contained only an ancient device for wet-cupping. He left behind a flourishing department respected by both clinicians and medical scientists, with a record of first class work in many fields. Platt himself will be remembered as the man who first proposed the ‘intact nephron hypothesis’ of the mechanism of chronic renal failure in his Lumleian lectures in 1952 (thus anticipating Bricker, to whom this is usually attributed); as the doughty contestant of his friend, Sir George Pickering, in their long controversy over the nature of benign hypertension, and as a pioneer in the application of genetics to medical problems.

Outside clinical medicine he was a man of wide and varied activities. Among other appointments he was a member of the Medical Research Council and later chairman of its Clinical Research Board; a member of the Royal Commission on Medical Education, about some of whose recommendations he had serious reservations; chairman of the first joint working party of the profession and the health departments, set up to review the medical staffing of hospitals; chairman of the Merit Awards Committee, and at different times president of the Eugenics Society, the Family Planning Association, ASH (Action on Smoking and Health) and the National Society for the Abolition of Cruel Sports. Apart from some ninety papers, he wrote Nephritis and Allied Diseases (1934); Doctor and Patient (the Rock Carling Fellowship 1963), and a somewhat picaresque autobiography Private and Controversial (1972). This revealed him as a very human person— a man of wide interests and strong opinions, some of them distinctly controversial. His views on the value of exposing undergraduate medical students to general practice were well ahead of his time, as was his support for women in medicine.

Platt succeeded Russell Brain as PRCP in 1957, at a time when plans were in existence for an unsatisfactory extension upwards of the Pall Mall building. Almost immediately there occurred the first of three pieces of good fortune which, as he himself said, aided him in achieving the move to Regent’s Park. The Hon George Drew, High Commissioner for Canada, came to reopen the question of Canada acquiring the RCP building. The College was promised a considerable sum for surrendering its Crown lease, but more money was needed. Horace Evans (Lord Evans of Merthyr Tydfil) came to suggest an approach to the Wolfson Foundation, which eventually gave a further near half million pounds. No site in Regent’s Park could be found, and most prestigious estate agents strongly recommended a site in the Harley Street area. Comitia voted by a small majority to accept the advice and move to that site. It was perhaps Platt’s greatest contribution in this matter that he said that he accepted the vote as a decision to move, but not necessarily to that particular site. Not much later - the third piece of good fortune - the late Edward Cullinan FRCP came to say that the Someries House site in Regent’s Park was available if the College wanted it, and this was, of course, exactly what the College did want.

Platt consulted Sir John Summerson whose advice, that a new RCP in Regent’s Park must be an uncompromisingly contemporary building, caused him some dismay, but he followed it. He chaired the small committee which chose Denys Lasdun (now Sir Denys Lasdun) as architect; presided over all the planning and eventually steered the controversial plan and model of the proposed building through Comitia with a nem con vote. In spite of some good fortune, there is no doubt that it was Platt’s enthusiasm and leadership that gave the College its new building. He had retired by 1964 when it was at length opened by Her Majesty Queen Elizabeth II. His other main contributions to the College were the postgraduate conferences, which he inaugurated in Pall Mall and which were to flourish exceedingly in the new building, and his encouragement of the Smoking and Health Report (1971) which led to the campaign against smoking and other developments in the field of preventive medicine. Quite as important as the new building was the new direction and impetus which he provided.

In 1967 he became a life peer and attended regularly and enthusiastically in the House of Lords for the next eleven years. He sat on the cross benches, in order, as he said, to be able to speak for medicine rather than to represent a party point of view. After a slow start he spoke effectively and often on many subjects, including the National Health Service, health education, divorce, pornography, and voluntary euthanasia. Latterly he displayed what many thought to be some less progressive concerns, notably in his support for the preservation of the Elizabeth Garrett Anderson Hospital, and in his opposition to a bill for the compulsory wearing of seat belts in cars.

Outside medicine his greatest interest was music, and in particular playing the cello in string quartets. Coming of a musical family he developed as a child a quite precocious expertise in tonic solfa, learned to play the piano and started lessons in cello playing from the age of nine. He practised the cello, on most days, to the end of his life, and reached a standard respected by professional players. There is said to have been a cello-playing president of the College in the eighteenth century, but it is likely that Platt was the only president ever to practise alone at night, and then to play in string quartets in the Censors’ room. He served on the Committee of the Hallé Concert Society from 1947 to 1953, and was a member of the council of the Royal Manchester College of Music. From 1952 to 1965 he was chairman of the Manchester Chamber Concerts Society.

Platt was something of an enigma to some of his contemporaries -a successful consultant who became a distinguished wholetime professor, but who turned severely to criticize some aspects of wholetime medicine and professorial units in his Harveian oration in 1967; a humanist and outspoken critic of revealed religion, who showed selfless dedication to his patients and to the many causes that he espoused, and a socialist who defended hereditary representation in the House of Lords: yet in spite of these apparent inconsistencies it was rightly said at the time of his death:-
‘he has been one of the great personalities of British Medicine during the past half century and still a human, approachable and friendly man. He could show firm authority, yet he never failed to give full weight to, and ensure a just hearing for the views of others. He thought it right to state the strong beliefs he held on some controversial subjects, but he never sought to force them on others. He became a widely respected public figure. In any medical generation there are a few who are recognized by a wider public not merely as great figures in their profession but as men or women of stature in the world beyond it, and able to take the broader view. Robert was such a one…’

One could ask how did a man with such a background and such ideas come to exert the influence he did on a traditionally conservative body like the RCP? But perhaps equally, could a man of more traditional type have had his vision of the future of the College?

His first marriage in 1922 to Margaret Irene Cannon MB BCh DPM produced a son and two daughters. The marriage was dissolved in 1974 and he married secondly Sylvia Jean Haggard (née Cavely) ARCM (viola). His son, Sir Peter Platt, Bart, became professor of music at the University of Sydney.

Robert Platt died in University College Hospital some weeks after sustaining a fracture of the femur in a fall on the steps of the College. At his express wish there was no memorial service, but on 22 November 1978, the Lydian String Quartet gave a concert in his memory in the College library, concluding with Beethoven’s last important composition, the Quartet in F major, Op. 135.

An admirable portrait by Merlyn Evans hangs in the College, and a tape ‘Talking with Robert’ is preserved in the library.

† The list of honorary degrees is too lengthy to include in entirety.