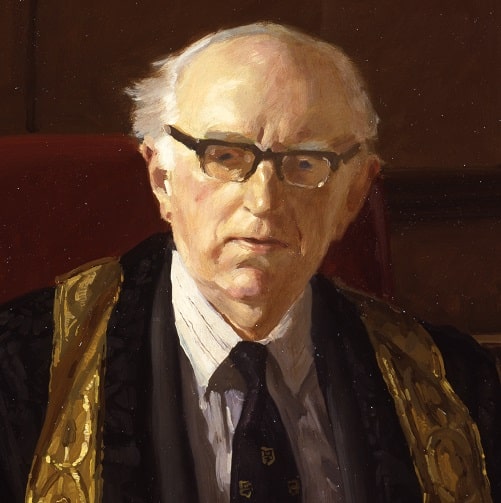 Douglas Andrew Kilgour Black was President of the College and a former chairman of the British Medical Association. A son of the manse, it was his mother from whom he derived an association with medicine; she had been a ward sister at the Dundee Royal Infirmary. He confessed to having had a happy childhood, mostly spent in Kirriemuir, to which his father was translated when he was two, and far enough removed, one supposes, from the First World War and its aftermath for a loving family to provide an emotional shield.

From Forfar Academy he went to St Andrews for his medical education, which included an intercalated BSc, made possible by competitive bursary, followed by clinical training in Dundee. Qualifying in 1936, he had house posts at Dundee Royal Infirmary with Adam Patrick [Munk's Roll, Vol.VI, p.368], professor of medicine, and the surgeon Francis Brown. He obtained one of the first Medical Research Council studentships in clinical research and went to Oxford to work with Leslie Witts [Munk's Roll, Vol.VII, p.618] in the new Nuffield department of medicine. Here while studying the management of haematemesis and then in a short spell with Widdowson and McCance in Cambridge, he developed three long lasting interests, in nutrition, in water and electrolyte metabolism and - through its central involvement in the consequences of shock - the kidney.

In 1942, his time in research was halted and he joined the Royal Army Medical Corps. He was posted first to Sierra Leone, but soon re-posted to India, arriving after a sea journey of two months, which, at sea in good weather, must have been a pleasant interlude. Short postings in the Deccan and in Burma were followed by an appointment to lead the biochemistry division of the central military pathology laboratory service in Poona. Here, his 'team' included Paul Fourman [Munk's Roll, Vol.VI, p.181], who later worked on bone metabolism in Cardiff and as professor in Leeds and James Robson, who became professor of medicine in Edinburgh. So the authorities knew something that these young men - who saw no good reason for this use of their time - had not yet grasped! So-called tropical sprue was a problem for the Allied Forces and the team studied its genesis.

He returned to England in 1946 and was appointed lecturer in the department of medicine in Manchester that Robert Platt [Munk's Roll, Vol.VII, p.470] was creating there. Platt was the first full-time clinical professor of medicine in Manchester. His medical unit became a model for medical units elsewhere in the country, and the leading British centre for the study of renal disease, with its stars the imperturbable Douglas, the plain-spoken Malcolm Milne [Munk's Roll, Vol.IX, p.367] and the mercurial Bill (W S ) Stanbury [Munk's Roll, Vol.X, p.465].

Douglas ran a busy clinical and teaching service, and worked on various aspects of electrolytes, particularly potassium metabolism. His most original work in these years was his study with Milne of experimental potassium depletion in man, and it was characteristic of the unit that the authors were the experimental subjects for the study. But somehow Douglas was usually to be found at his desk of his office with the stub of a pencil, carefully crafting articles, reviews and books on the subjects that were dear to him. His two monographs over this period, Sodium metabolism in health and disease (Oxford, Blackwell, 1952) and The essentials of fluid balance (Oxford, Blackwell, 1957) were small enough to be squeezed into the pocket of a white coat; the latter went to four editions over ten years and can still be read with benefit.

His writing had a beguiling fluency which was easily recognised in anonymous leaders in The Lancet and BMJ. Inevitably he was recruited by the MRC to launch and chair various multicentre controlled trials, usually on steroid treatment of various forms of glomerulonephritis, where his patience and self-deprecating humour ensured co-operation from the most intransigent colleagues.

When Platt became President of the Royal College of Physicians, Douglas Black succeeded to his chair and was professor of medicine in Manchester from 1959 to 1973. His department continued to have a vigorous general medical interest, as well as being in the forefront of British nephrology.

Black was cautious on the introduction of regular haemodialysis for the treatment of chronic renal failure. He recognised that any treatment for a uniformly fatal condition was an advance, but was uncertain that it would be possible to treat effectively all those in need. His perception remains relevant still. Even though the basic technique of dialysis is now supplemented by improved nutrition, blood pressure control and specific treatment of such previously intractable complications of renal failure as anaemia or the derangement of bone metabolism known as renal bone disease, the number of patients with renal failure still exceeds the capacity to treat them in many countries including the United Kingdom.

As already noted, Black was early a part of the MRC, gaining one of its first studentships. In the event his involvement with it proved long lasting. In 1966 he was appointed an independent scientific member on its council and in 1971 he became chairman of its clinical research board. This was a particularly challenging time for the MRC, as indeed for sister non-medical research bodies; the Government wanted to get more a recognisable return for its investment in them. Lord Rothschild reported and suggested a customer contractor principle; thus Government would indicate the research areas it wished to be addressed and the contractor would set about the tasks.

As a way of achieving productive research in the given environment it was, to say the least, a dubious proposition. Michael Heseltine, who had to implement this approach in the research bodies under his then Ministry of Trade, has described it as flawed since it did not account for the structure of these bodies which were essentially groups of scientists of varied but constrained talents. Attempts to conduct research in which the scientific body was not expert would have meant redundancies on a large scale and never happened.

Perhaps to his surprise Black was invited to become chief scientist to the Department of Health and so to implement this policy, which he had questioned both in private and in public. He set about this in a characteristic way, recruiting sensible people to assist in developing specific projects. He himself described the difficulties in trying to constrain naturally free-thinking science either to the customer contractor principle or to specific topics thought to be of pressing important to the Health Service. He also encountered the difficulty of making telling innovations when the funds available were being reduced and the process for spending them subjected to increased rigour (i.e. more bureaucracy).

In the event these various hurdles to implementing the Rothschild approach proved insuperable and in Health as elsewhere, research momentum was lost. Black's conclusion that "the really important long-term benefits in medicine come not from mission oriented research but from research which illuminates important general problems" is not to be forgotten.

While Black enjoyed his time in the higher reaches of the civil service, not least because of the insights it gave into the working of Government and the people who make that happen, he welcomed the opportunity offered by his election in 1977 to be President of the College, an office he carried for the next six years.

The traditional role of the College in accrediting by examination aspiring physicians from Britain and the Commonwealth, its concern for training these doctors both at home and abroad, before and after they achieved independent consultant status, and its involvement in the working environment for practising clinicians all require careful attention. The interest of Governments, of the Press and not least of the public in the quality of health care had not reached its present intensity but was already aroused. The College undertook a wider role in studying, usually through working parties, particular aspects of health. Its report on smoking had earlier been seminal in changing the public attitude to health risks.

Black's academic and administrative experience made him well suited to undertake, through the College, leadership of the profession in these matters; but also his personality proved to fit admirably the formal and informal aspects of the post. Always approachable and obviously kindly, his sharp observation was evident in his trenchant, often witty, asides. On less formal social occasions his speeches, like his informal conversation, were a delight.

After his term of office in the College he was president of the British Medical Association from 1984 to 1985 and later president of the Medical Council for Alcoholism and of Health Concern. But it was more for his work with Townsend, Morris and Smith that he became more widely known. Before he left the Department of Health these four had begun to study the basis for inequality in health. In 1980 the Department of Health published the report (260 stencilled copies) on a Friday afternoon before the August bank holiday. Nevertheless, it was widely rumoured that the new Conservative Government found itself out of sympathy with the Black report's finding that social deprivation underlay much of health inequality. It has become an iconic text and its approach has been influential.

Black did not find himself in sympathy with Margaret Thatcher and though he was called on to investigate the risk of childhood leukaemia around the Sellafield plant, he did not otherwise contribute publicly to the development of health policy, as he might have done in a more sympathetic political environment.

Douglas's special gift was the deadpan remark, delivered almost too quietly to be heard, that would puncture the pompous occasion and relieve boredom. One of the last occasions that he spoke in public was the dinner of the 50th anniversary of the Renal Assoication in 2000, when he thanked the society for providing him with a free meal. He developed diarrhoea at the meeting, which he realized was not the fault of the meal, but caused by steatorrhoea, and that he would shortly develop obstructive jaundice. He describes this last illness, its temporary palliation by stenting, and various metabolic complications, in an occasional paper in the College Journal of Sept-Oct 2002, kindly sparing the reader the more harrowing details.