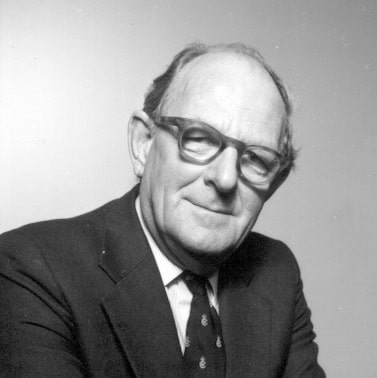 Nigel Dean Compston was a physician of exceptional talent who also had a gift for administration that would have ensured his success in many other walks of life. He will be particularly remembered for his work for the Royal Free Hospital and the College.

Nigel Compston was the son of a Leeds general practitioner who died when he was only six years old, leaving his family in some financial difficulty. Nigel and his brother Peter (Vice-Admiral Sir Peter Compston) were brought up and helped by various members of the family, and later Nigel was admitted to the Royal Masonic School which selectively was able to assist the sons of doctors. From there he won a scholarship to Trinity Hall, Cambridge, and went on to the Middlesex Hospital for his clinical training. He also had time for rowing and rugby. His childhood cannot have been easy but from it must have grown his determination, courage, dedication and capacity for hard work.

He took his qualifying examination and the MRCP in the same year, a remarkable achievement which would not now be possible. He took an equally short interval to marry Diana and then went straight into the Army. He landed with the British Forces in Normandy and at the end of the war, at the age of only 27 years, was a lieutenant colonel and responsible for the health of the British garrison in Berlin.

He left the Army in 1947 and in 1948 became a research fellow in his old hospital, the Middlesex, where his research with Douglas McAlpine [Munk’s Roll, Vol. VII, p.349] was largely concerned with multiple sclerosis; he also assisted Alan Kekwick [Munk's Roll, Vol.VI, p.264] in teaching students. In 1951 he was E G Fearnsides Scholar at Cambridge and also Mackenzie-Mackinnon research fellow of the College. From 1952-54 he was assistant professor of medicine at the Middlesex.

Nigel Compston was appointed consultant physician at the Royal Free in 1954 and began his association with the hospital, which lasted until his retirement in 1983. He was a popular and painstaking consultant, always kind to patients, forbearing with his iuniors and never ruffled in spite of the horrendous timetable he set himself. He was a popular teacher, and for some years was sub-dean of the medical school. His standards were set high and he expected his juniors to meet them; he was always available when needed and supportive when things went wrong. He was regarded by them as a good friend and indeed he was loved by them. For many years Nigel held an outpatients clinic on a Saturday morning at the old Hampstead General Hospital; the clinic always closed at 11.30am so that he and his juniors could gather with a set of Hampstead regulars at one of the local hostelries for a pre-lunch drink.

The hospital was able to make full use of his strength as an administrator, which led to his appointment as a leader of the medical planning team that so successfully transplanted the hospital and medical school from Gray’s Inn Road to Pond Street, Hampstead. He kept the peace between ambitious clinicians, trying to maximise the facilities they would take over, and prudent administrators trying to minimise the costs. It was not an easy task, as extremists on both sides were able to blame him when their demands were not met. He withstood these criticisms with characteristic phlegm and fortitude and steered what he knew to be the correct course. As a tribute to his work in planning the new hospital, a ward at the Royal Free was named after him by the Duke of Kent in July 1988.

He was also consultant to the Royal Masonic Hospital, and to the King Edward VII Hospital for Officers. He was joint author of a work on multiple sclerosis, and co-editor of five volumes in the series Recent Advances in Medicine.

Election to the Fellowship of the College came in 1957 and with it the other focus of Nigel’s life. The College recognized his academic talent and appointed him assistant registrar. In 1962 he introduced the annual conferences on advanced medicine and edited the first volume in the series, mentioned above, which still goes on. He became treasurer of the College in 1970 and held office for 15 years. During this time he put the College finances onto a secure basis and initiated two public appeals, while masterminding the purchase of the leases for the conversion of the 10 houses in St Andrews Place. The difficulties over the acquisition, planning and financial sides, were immense, but Nigel said that the opportunity would never recur and the difficulties just had to be overcome. He worried a great deal about the College and the Precinct project but was determined to follow it through; he even launched his own appeal to Fellows to invest some of the College’s money so that it would be untouched for 100 years, and the Fellows would then be able to buy the next 99 year-leases of all the present College buildings from the Crown Estates Commissioners.

The project lasted the whole of his treasurership, and it was a great pleasure to all his College friends that Nigel and Diana were not only present at the opening of the Medical Precinct, the name he gave to the houses and area, by Her Majesty The Queen in June 1986, but that his grand-daughter Polly, daughter of his son Alastair and his daughter-in-law Juliet, both Fellows of the College, presented the Queen with her bouquet on that occasion.

The College staff will always have cause to be grateful to Nigel’s treasurership. He had their welfare at heart and put their pay and pension structure on a secure footing. He was ever ready to listen and advise, but any new project had to be properly presented and costed. He used to say that he could act as a minister or a civil servant, but his ojective advice was invaluable to both the senior staff and the College as a whole.

For relaxation he had now turned to skiing and golf, and occasionally during the week he would sneak up to Highgate for 18 holes. On these occasions his consulting rooms would be told he was at the College, and the College that he was consulting! Nigel loathed verbosity and could express profound disapproval through a series of grunts, accompanied by a scowl, at some of the more loquacious Councillors; sometimes the grunts occurred at lunches with those known as ‘opinion formers’ or guests from the media. Hypocrisy and humbug were always repugnant to him; anybody who was not on time, be it a patient or a luncheon guest, was told of their error in no uncertain terms - and some remembered it for years afterwards. Nigel trusted people, he would never let them down himself and felt it very deeply when his trust was misplaced. He was a good judge of character so this did not happen often despite the demanding standards that he applied.

In later years his health was not good but he surmounted even major surgery with equanimity. When the College telephoned, two hours after a hip replacement, to find out how he was, we were told he was awake and reading the newspaper.

Nigel’s enthusiasms included domestic activities; he was very proud of Diana’s painting talents and he had no mean brush himself. With their children, Fiona, Alastair and Robin, the Compstons were a close-knit family. He was particularly proud when Alastair became a Fellow of the College. Nigel was a man of many talents and diverse qualities, but one had to dig to find out about them as he seldom spoke about them himself. The digging was worthwhile; the deeper one got the greater the treasure.

It is only fitting that there is now a permanent memorial to him in St Andrews Place, echoing that of Sir Christopher Wren in St Paul’s Cathedral: ‘Si monumentum requiris, circumspice'.