Skip to main content
The respiratory health of the nation: smoke, air and the RCP

There have been many distinguished specialists in respiratory medicine among the RCP fellowship. However, a report produced by the RCP in 1962 might be able to claim more benefit to the country’s lungs than all their individual efforts.

Today there is little argument that smoking tobacco greatly increases the chances of developing lung cancer and other diseases. Fifty years ago, however, the risk was not yet fully understood, neither by the medical establishment nor by the general public. A report issued by the RCP helped to change public perceptions of the dangers of tobacco.

In 1958, the RCP fellows Charles Fletcher (1911–1995) and George Godber (1908–2009) approached Robert Platt (1910–1978), then president of the RCP. Fletcher and Godber proposed that the RCP investigate the relationship between smoking and health. By the middle of the 20th century, it was becoming impossible not to notice a sharp rise in the incidence of lung cancer in the populations of several countries.

The Committee on Smoking and Atmospheric Pollution 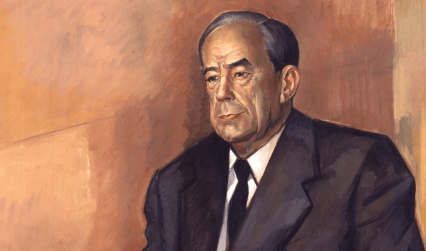 The RCP had involved itself in public health policy in earlier centuries, with publications on plague and interventions during the gin craze of the early 1700s. Since then, however, the RCP had largely avoided overt pronouncements on public health policy. Platt was keen to re-position the RCP as an active voice in such matters. He established the Committee on Smoking and Atmospheric Pollution, which he also chaired, to produce a report.

All of these studies showed higher incidences of, and death from, lung cancer amongst smokers. Several alternative hypotheses were considered and rejected. These included the possibility that the general increase in air pollution was responsible for the rise in lung cancer cases, that lung cancer was affecting people ‘who would have died of tuberculosis in former times but have now survived with lungs susceptible to cancer’ and ‘that smokers inherit their desire to smoke and with it inherit a susceptibility to some other undiscovered agent that causes lung cancer’.

The report stated clearly that those who smoked tobacco were at greater risk from lung cancer and other diseases, with a higher mortality rates. Its conclusions included that:

It is necessary for the health of people in Britain that any measures that are practicable and likely to produce beneficial changes in smoking habits shall be taken promptly … General discouragement of smoking, particularly by young people, is necessary … There can be no doubt of our responsibility for protecting future generations from developing the dependence on cigarette smoking that is so widespread today.

The report recommended that the government use a wide range of options to reduce smoking levels in the country: 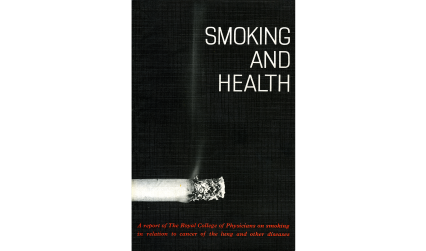 All of these will be familiar to the modern reader, though many took decades to implement.

Smoking and health sold 33,000 copies and was republished worldwide in languages including German, Swedish, Spanish and Japanese. In the UK, cigarette sales began to fall in the wake of the report’s publication, and many smokers switched to less harmful filtered brands.

The findings of Smoking and health and subsequent follow-up reports such as the 1971 Smoking and health now were hard to argue against, and were widely reported in the press. Their recommendations, however, met with mixed opinions regarding personal choice and freedoms. On 6 January 1971, The Daily Telegraph printed a photograph of the committee behind Smoking and health now. Each member was named and it was noted that none of them now smoked cigarettes. However, the columnist Peregrine Worsthorne (born 1923), was critical of what he saw as interference, stating that ‘the Royal College of Physicians [is] taking the place of the Church as the main threat to human freedom.’

The RCP’s Tobacco Advisory Group continues to investigate the harm caused by smoking. Other threats to respiratory health have also come under the RCP spotlight. For 50 years, the RCP has analysed of the effects of poor air quality. The 2016 report Every breath we take: the lifelong impact of air pollution, co-authored with the Royal College of Paediatrics and Child Health, starkly set out the dangerous impact air pollution is having on our nation’s health.