There’s nothing like having a go at making something yourself to help understand how a historical artefact was put together in the first place. Over the last few weeks we’ve been getting investigative and interactive with some of the exhibits in Under the skin: anatomy, art and identity.

The exhibition includes several anatomical lift-the-flap books, also known as ‘flap anatomies’, or for the earliest examples from the 16­th and 17th  centuries, ‘fugitive sheets’. These books are hugely engaging: both fun and educational. But as with most exhibition exhibits, they need to be displayed locked inside a glass display case, displayed statically. An even when we have them out of the cases for a hands-on session, they’re sufficiently fragile that they can’t be repeatedly handled and unfolded without restriction.

So, how to show them off to best advantage and help people understand their three-dimensional form whilst keeping them safe and still? With some imaginative work during the exhibition mounting process, they can be shown to something near full effect, revealing the multiple layers and dimensions of their construction. I’m very grateful to the team at Duke University Library for advice on how they mounted their flap-book collection in their 2011 exhibition Animated anatomies, documented by Meg Brown in the Book and paper group annual. Spending an afternoon with your head stuck inside a half-open display case wielding tweezers and tiny tubes of polythene is a pretty fraught affair, but it was more than worth it.

We’ve even gone a step further in trying to understand and illustrate these objects, and have been cutting up and making our own anatomical flap diagrams, too.

One of the most famous books in the history of medicine is Andreas Vesalius’ De humani corporis fabrica (‘On the fabric of the human body’). It was published in two versions in 1543: one complete edition of over 600 pages, and a summary (called the Epitome) with key text and images on just a couple of dozen pages. One book was aimed at rich physicians and book collectors, the other at students, surgeons and people on tighter incomes.

Both versions include pages intended to be cut up and assembled by the owner, and we’ve based our anatomical model making on the version from the Epitome, a page that is displayed in the exhibition. Some examples of this diagram cut up and assembled survive in libraries today: such as a beautiful hand-coloured version in at Cambridge University Library.

The RCP copy still has the whole page intact: no-one in its nearly 500-year history has tried to cut it up and assemble it. We can’t go cutting up the rare books (there are very firm rules about that!), so we’ve done the next best thing, and have been using a photographic copy instead. 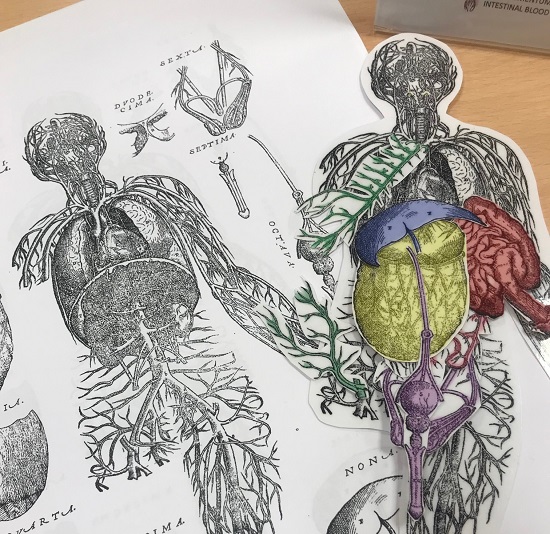 The pictures in the original book come with lengthy instructions, but they’re in Latin, and presuppose anatomical knowledge above my own. So I’ve been figuring it out with the help of some contemporary text books, and one or two friendly physicians and surgeons.

Trying to assemble these anatomical models is a great way to get to grips with anatomy: do you know what an omentum is and where it sits in the body? And you add more and more pieces you start to appreciate that while this layered approach seems like a neat way to represent the three-dimensional body using the two-dimensional medium of printed paper, it only works to a certain extent. The pieces can’t be left as a series of flat layers: they need to curve round each other. Intestines have to bend backwards, tucking in behind the bladder. The oesophagus has to weave behind the heart and lungs before emerging again at the back of the mouth.

Making up a replica version of these diagrams is good fun: you get the chance to play with the pieces much as the original owners might have done, rather than handling them with the care, attention and respect that the surviving historical examples require. Once upon a time, these intricate constructions were all the rage, and would have been treated as ephemeral or disposable. Their owners would have played with them until they fell apart. Today, as a librarian, I don’t usually get the chance to treat objects in that way!

Get creative with our collections

Anatomy in the RCP museum: explore our new museum trail

A new trail around the RCP museum explores the history of anatomy and the ways human bodies have been used in medical science.

Under the skin: the bodies behind the pictures

Exhibiting illustrations of human anatomy raises questions about the ethics of dissection and display in the history of medicine.