'God heals, and the Doctor takes the Fees’.

Pompous, vain, arrogant, ignorant, ridiculous and indifferent to their patients’ suffering, 18th and 19th century medical professionals were stereotyped by contemporary satirists, who used this imagery to comment upon the medical professions and the state of the nation’s health.

The medical professions were targeted generally – as were priests, lawyers and teachers – because they were in the public eye and were perceived as a threat to the young and the healthy. Anti-doctor satire in particular initially focused on fear and anxiety of, and resentment towards, the powerful professionals who prodded, bled, wounded and invaded their patients, with limited success in curing them. It later became a way of putting doctors in their place, of deflating egos and exposing pretension.

Satirists delighted in portraying doctors as cynics who only consulted with patients to collect their fees. Doctors were also mocked for being dangerously ignorant and for arguing among themselves, for only being concerned with appearances, or even of working in collusion with Death. 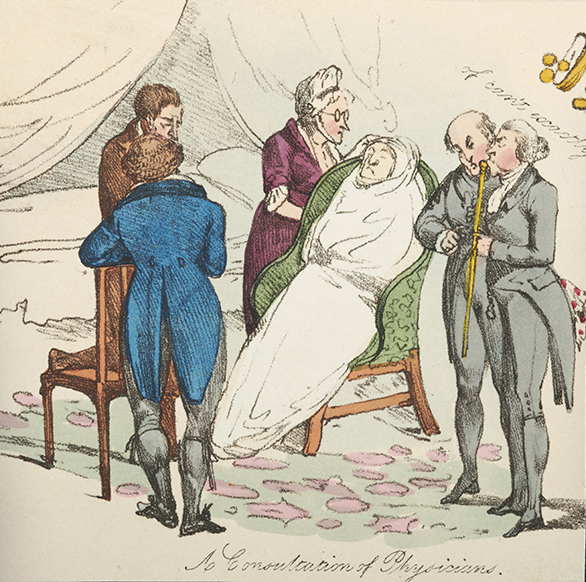 A consultation of physicians

A consultation of physicians

A dead or dying patient wearing a funeral shroud is attended by a nurse or female family member and two men, one of whom kneels on a chair to keep out of the blood that is spattered across the floor. Two doctors stand closely together in consultation.

The doctors do not engage with the patient but put their heads together and close their eyes. One doctor sticks out his chin and sniffs his cane – an action associated with doctors in the 18th century. Above their heads coins spill from a purse.

A common 18th century medical stereotype was of the doctor as a ‘dangerous ignoramus’ – someone who did not know what they were doing and could not cure their patients. In this image the doctors have failed to heal their patient, and the blood on the floor and on one doctor’s handkerchief suggest their treatments were violent.

In the 19th and early 20th centuries doctors were more commonly satirised for being pretentious and unwilling to get their hands dirty. In this image, the doctors tread carefully to avoid the blood on the floor. They are pompous, indifferent to their patient’s suffering, and only concerned with collecting their fee.

View catalogue entry for A consultation of physicians 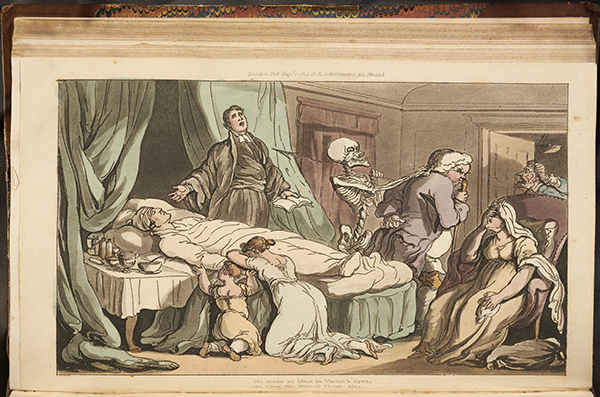 The good man, Death and the doctor

The good man, Death and the doctor

A man lays dead or dying, surrounded by his mourning family. Exiting the scene is his doctor, who sniffs his physician’s cane while a skeleton taps him on the shoulder.

The popular artist Thomas Rowlandson (1756–1827) here plays on the resonating suspicion that doctors were disciples of Death. The doctor has failed to save the dying man, and so has assisted Death in his work – Death and the doctor appear to be in collusion. The idea that a visit from the doctor could be fatal meant that doctors were viewed with fear as well as hope.

This scene is from Rowlandson’s series The English dance of Death, published by the prolific London print trader and publisher Rudolph Ackerman. Dance of Death illustrations feature people from all ranks of society accompanied by Death, usually represented as a skeleton. The illustrations are memento mori – a reminder that everyone dies.

The good man, Death and the doctor shows us that Death will come for the doctor as well as for his patients – the doctor’s knowledge of medicine and healing will not save him.

View catalogue entry for The good man, Death and the doctor 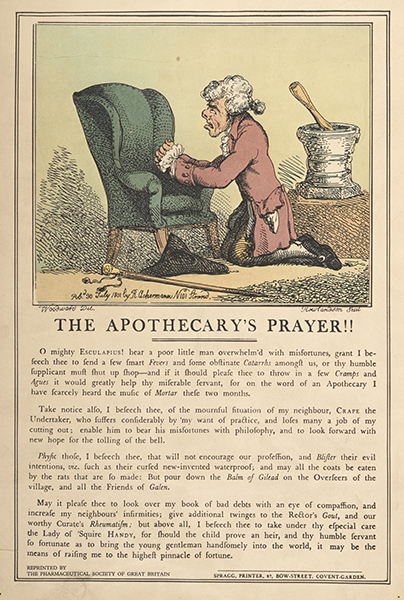 An apothecary prays by an empty armchair. He is identified by his hat and cane which lie on the floor, and by the typical tool of his trade: an oversized pestle and mortar on the table behind him.

According to the poem beneath the picture, the apothecary is praying that a host of illnesses descend upon his neighbours and customers. Their good health is bad for his business, and illness would enable him to earn money and clear his debts by preparing and selling medicines to them.

The poem refers to the pregnancy of ‘the Lady of ’Squire Handy’, and the apothecary claims that if he was ‘so fortunate as to bring the young gentleman handsomely into the world, it may be the means of raising me to the highest pinnacle of fortune’. The apothecary displays his greed, playing into the stereotype that medical professionals were preoccupied with exploiting their patients.

The print’s publisher, Rudolph Ackerman (1764–1834), mostly sold to ‘the respectable and well-heeled middle classes’. This print was reprinted by the Pharmaceutical Society of Great Britain, meaning the image’s audience were society members and the wealthy – the very people for whom the apothecary is praying for ill health.

Part of the exhibition A taste of one's own medicine  Explore further:

Previous: A taste of one's own medicine homepage

Next: Medicine as metaphor