Medical satire could be used to comment upon themes that had little – or nothing – to do with medicine.

Examples from our satirical print collection show how imagery of the medical profession was sometimes adopted as a metaphor to critique current events. In particular, images of doctors were used to comment upon the tumultuous political events occurring in France in the 18th and 19th centuries, including the revolution, political and social unrest and changes in governmental regimes.

Other, more obviously political imagery was also used to comment upon these events. However, medical imagery may have been used in these examples because satirical images of the medical profession were so commonplace. They would have been widely recognised by public audiences, and the stereotypes and associations that these medical images brought to the referenced events were likely to have been understood.

Today, knowing the political context behind the creation of these images is vital to interpreting the medical metaphors they contain. 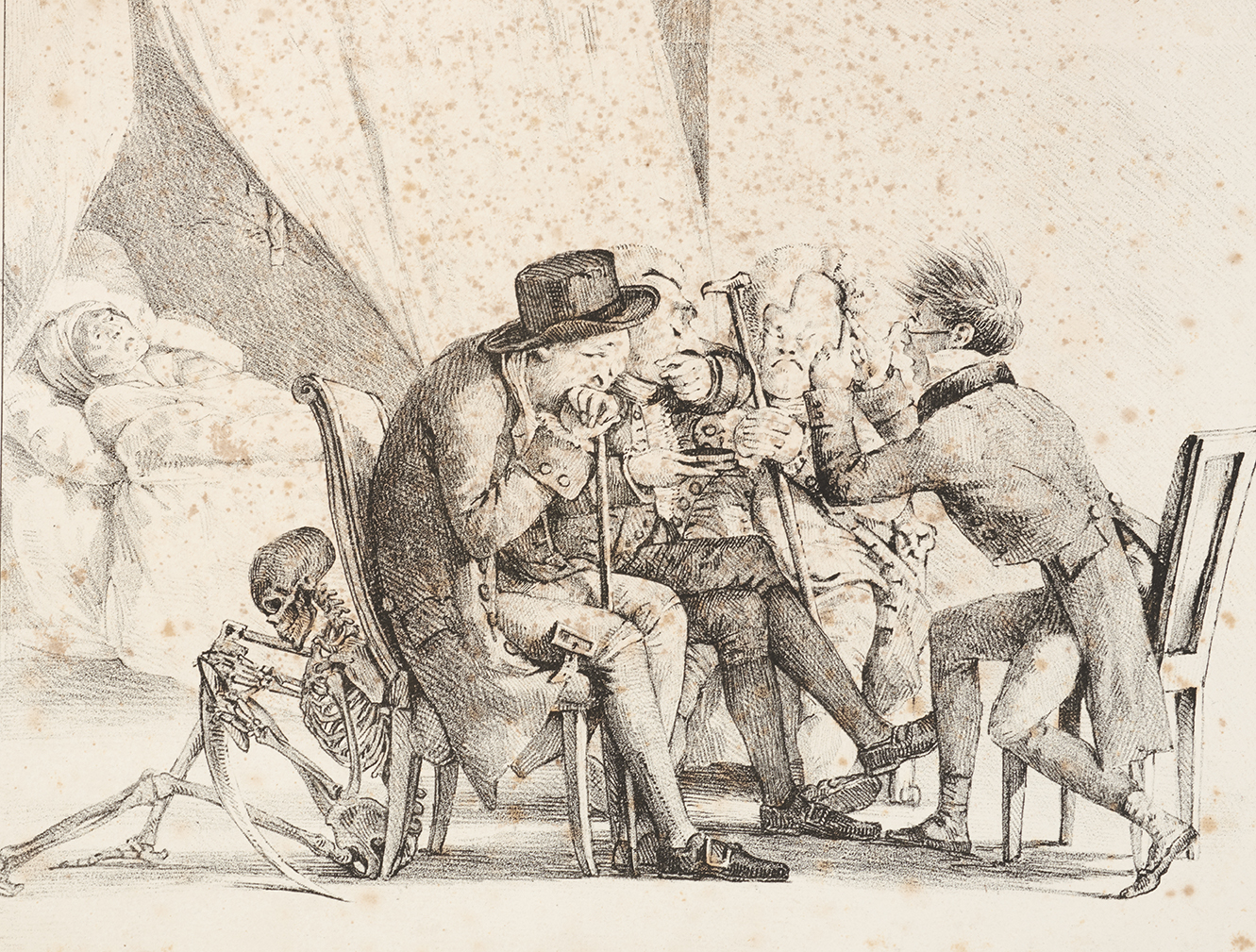 Death – represented as a skeleton with a scythe – sits behind a group of arguing doctors, biding his time before the sickly, bedridden patient in the background inevitably dies.

This image appears to be a straightforward medical satire, commenting on the role of Death as a close companion to the doctors, whose incompetence causes their patient’s demise. However, the point being made is not about medicine. Rather, medical imagery is being used as a tool for commenting on France’s political situation – in particular, the political factions under the Bourbon Restoration, the constitutional monarchy of Louis XVII (1785–1795) following the French Revolutionary Wars.

The three doctors on the left are ‘Ultras’ – ultra-royalists who favoured the pre-revolution, absolutist monarchy. They wear outdated clothes and wigs, have exaggerated facial features, and ignore their patient (or sleep!). This critical print suggests that France (the patient) will suffer if the Ultras continue their rise in power and implement their laws censoring the press and restricting individual freedoms. However, the younger, smartly dressed and enigmatic doctor on the right – who represents more liberal elements of the government – offers hope (cures).

Charles Motte (1785–1836) was a liberal publisher, and it is likely that the audience for ‘La Consultation’ had similarly liberal political leanings. They were likely familiar with current affairs and therefore able to decipher the metaphors in the print. Today, without information about the political background of France at the time, this layer of meaning is easily missed and the print remains a straightforward medical satire. 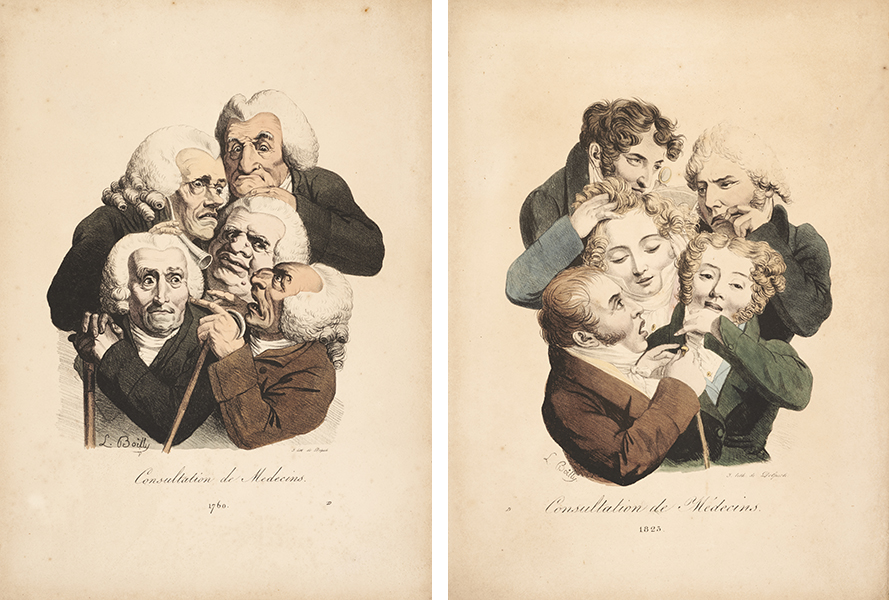 In French painter Louis-Léopold Boilly’s prints from his series Recueil de grimaces (Collection of grimaces), two contrasting groups of doctors are given the same title: ‘Consultation de médecins’ or ‘the doctors’ consultation’.

In the first, labelled ‘1760’, five aged medics have ear trumpets, walking canes, confused expressions and old-fashioned clothes, suggesting they are ineffective and outdated. In the second print, labelled ‘1823’, five younger, fashionably-dressed doctors have carefully styled hair, a magnifying glass and contemplative expressions, suggesting they are engaged in academic study.

These two groups of doctors are metaphors for the huge political changes that France experienced between 1760 and 1823. The older doctors represent France’s Ancien régime (Old regime), the centuries-old government based on a hereditary, absolute monarchy and powerful nobility. The doctors – and the Ancien régime – are chaotic and useless.

The younger doctors represent the French Revolution of 1789 which overthrew the Ancien régime, and began decades of unrest as different regimes held power. These young doctors look more capable, but on closer inspection are perhaps not much more effective than the old doctors. They appear baffled and dreamy, and are overly concerned with appearing stylish.

Boilly’s political views are unclear, and so the viewer must decide what message he is conveying in this image. Does he think that the political situation in France improved following the revolution, or that – despite initial appearances – things mostly stayed the same?