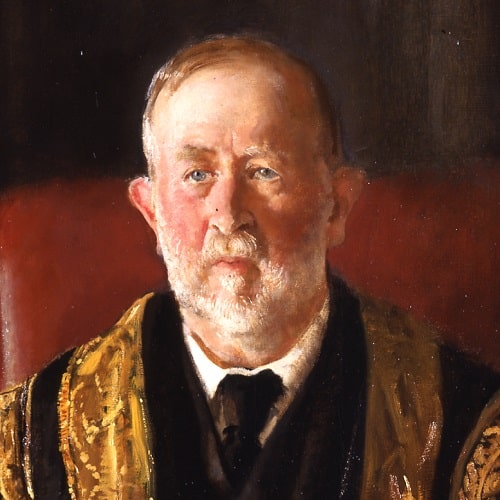 Norman Moore was born at Higher Broughton, near Manchester, the only son of Robert Ross Rowan Moore, political economist and ally of Cobden and Bright, by his wife Rebecca, daughter of Benjamin Clarke Fisher, a draper, of Lifford, County Tipperary, the Quaker descendant of a Cromwellian settler. Moore’s parents separated when he was young, and he was variously educated before becoming a student at Owens College in 1862. He won a scholarship to St. Catherine’s College, Cambridge, and graduated in natural sciences in 1869. He went on to St. Bartholomew’s for his clinical studies, and, after graduating as M.B. in 1872, became a house physician in the Hospital. St. Bartholomew’s, indeed, was one of the two institutions to benefit from Moore’s wholehearted and lifelong allegiance. Among the offices that he held there were: warden of the College (1874-91), lecturer on comparative anatomy (1874-85), demonstrator of morbid anatomy (1879-87), lecturer on pathology (1887-93) and lecturer on medicine (1893-1911); assistant physician (1883-1902), physician (1902-11) and consulting physician (1911-22). His crowning service to the Hospital was to publish in 1918 his History of St. Bartholomew's Hospital in two large and scholarly volumes, written over a period of thirty years in his spare time.

Moore's connection with the Royal College of Physicians was equally strong. From its inception in 1883, he belonged to the Committee of Management that first planned and directed the Conjoint Board examination, and from 1901 to 1922 he represented the College on the General Medical Council. He was Bradshaw Lecturer in 1889 — in which year he published The Pathological Anatomy of Diseases arranged according to the Nomenclature of the Royal College of Physicians — Harveian Orator in 1901, Fitz-Patrick Lecturer in 1905-06 and Lumleian Lecturer in 1909. He was Senior Censor, and in 1910 succeeded J. F. Payne in the office of Harveian Librarian, which he relinquished on his election to the Presidency of the College in 1918; the latter office he held till 1922. Among other honours accorded to Moore were invitations to deliver the Linacre Lecture at St. John’s College, Cambridge, in 1913 and the Rede Lecture at Cambridge in 1915. He received a baronetcy in 1919.

Moore was much more than an able physician, pathologist and teacher. He was more, too, than a historian of medicine and an antiquary of his native Ireland who contributed no fewer than 468 lives to the Dictionary of National Biography (yet failed to find a place in its pages himself). His erudition extended to most branches of knowledge, with the notable exceptions of philosophy, mathematics and music. To his qualities of mind were added a moral courage, a dignity of presence, a sympathy for the humble — but not for the pretentious — and a charm in conversation that won the friendship of men in all stations of life.

He married firstly, in 1880, Amy, daughter of William Leigh Smith of Crowham Manor, Westfield, by whom he had two sons and one daughter, and, secondly, in 1903, her cousin Millicent Bella, daughter of Major-General John Ludlow of the East India Company’s service. Moore died at his home at Whatlington, Battle.