In 1918 RCP president Norman Moore marked the RCP’s 400th birthday by giving a rare and historic medical book – a copy of the Rosa Anglica once owned by John Chambre – to the library.

The RCP library committee minutes for January 1919 record that

The President gave John Chambre’s copy of the Rosa Anglica. 1st edition, Padua 1492. The Treasurer moved a vote of thanks to the President for his valuable gift, and this was agreed to unanimously.

The president of the time was Norman Moore (1847–1922), and his gift to the RCP is still one of the treasures of the library. Moore in fact gave the book in Autumn 1918, to mark the 400th anniversary of the founding of the College by King Henry VIII on 23 September 1518.

There was no formal celebration of the anniversary that year, owing to the ongoing privations of the First World War, but various fellows made individual and group gifts and presentations to the College. A rare book to add to the library is often welcome, but why was Moore’s gift particularly appropriate?

The copy of Rosa Anglica that Moore donated to the RCP library had once been owned by John Chambre (1470–1549), one of the founding fellows of the Royal College of Physicians, and the first of the six doctors named specifically in the founding charter of 1518.

We know this because there’s an inscription on one of the last pages of the book. It’s written in abbreviated Latin and reads: ‘Lib[er] Jo[hannis] Chambr[e] socii collegii M[er]ton[ensis] p[re]c[ii] iii s. iiij d’. That means ‘The book of John Chambre, fellow of Merton College, price 3s 4d.’ 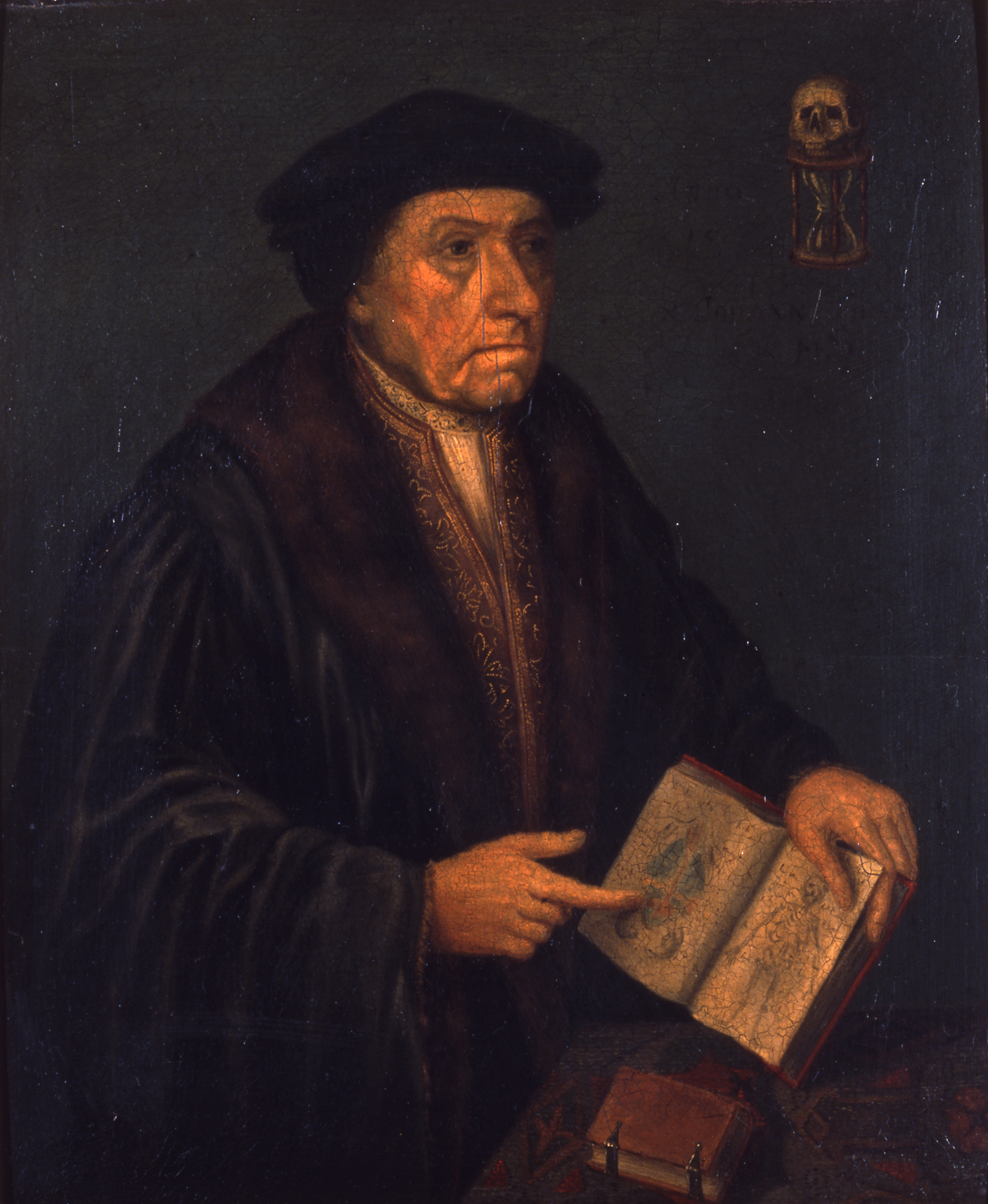 Chambre studied at Merton College, Oxford, where he became a fellow in 1492. He originally studied divinity and was ordained as a cleric, but he went on also to study medicine. In 1502 he travelled to northern Italy, a centre for medical learning and teaching. He studied at the University of Padua and graduated with an MD degree in 1506. When he returned to England he combined his religious and medical careers: he held positions in churches across the country at various times, and was also personal physician to kings Henry VII and Henry VIII.

Some of his prescriptions for Henry VIII – co-authored with his fellow royal physician and RCP fellow William Butts – are recorded in a manuscript at the British Library, including ‘A plaster to be made in summer, to cease pain, and mollify the humours resolving the same with comforting of the member’ and ‘an ointment to incarnate and dry up ulcers corrosive, ceasing their evil complexion’.

Chambre appears to have been kept busy enough with his royal duties and church appointments that he wasn’t particularly active in the life of the RCP. However, he was appointed as one of the censors in 1523.

The book title Rosa Anglica means ‘The English rose’. It’s named this for two reasons. Firstly, the five sections of the book match the five petals of a rose. Secondly, the rose was considered best of all the flowers, and its author thought his book could replace all the other medical books physicians and surgeons might previously have turned to.

The book’s author was John Gaddesden (?1280–1361), the first major medical scholar to be trained wholly in England. Many of the details of his life are unclear, but he seems to have studied medicine in Oxford between about 1307 and 1316. He wrote his master work, Rosa Anglica, during this time. Like John Chambre, Gaddesden was a fellow of Merton College, Oxford, and also held many religious appointments in churches across the country. He served as physician to several members of the royal family.

Gaddesden was a well-known physician in medieval England, and he’s mentioned in the Prologue to Geoffrey Chaucer’s Canterbury tales. Chaucer introduces the physician in the party of pilgrims travelling to Canterbury by likening him to famous historical and contemporary physicians including Hippocrates, Galen, Avicenna, Averroës, and a certain ‘Gatesden’, ie John Gaddesden. Indeed, Gaddesden might actually have been Chaucer’s model for the character of the physician:

Were it of hoot or cold, or moiste, or drye,

And where engendred, and of what humour;

The full title of Gaddesden’s book is Rosa Anglica practica medicine a capite ad pedes, meaning ‘The English rose: a practical medical guide from head to foot’.  It summarises and synthesises the works of numerous medical authorities, ancient and recent. Gaddesden frequently refers to authors including Galen, Avicenna, Dioscorides, Averroës and Hipporcrates, comparing and contrasting their opinions on diagnosis and treatment. 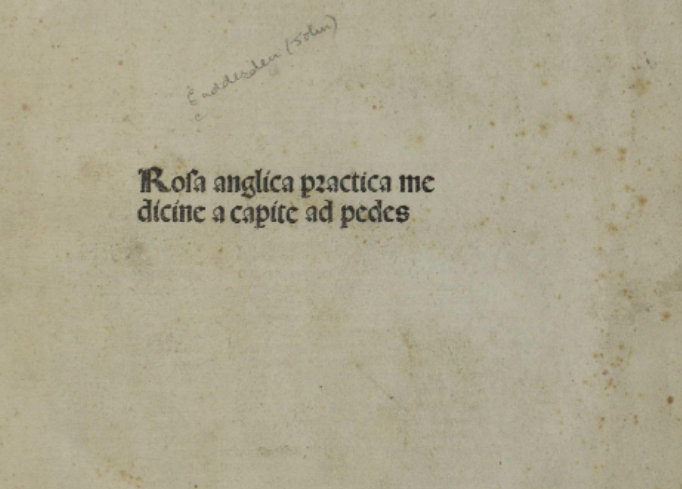 Gaddesden reports that he’s undertaken surgical as well as medical work, and claims that he saved the life of the King’s son when he fell ill with smallpox. It is suggested that this might have been one of Edward I’s two sons from his second marriage, either Thomas of Brotherton (1300–1338) or Edmund of Woodstock (1301–1330). Gaddesden’s cure for the disease was to use a various cooling medicines – including one made of fennel, wild celery, saffron and figs – and to surround the patient with red cloth, a technique he used with the king’s son:

I permitted only red things to be about his bed, by the which I cured him, without leaving a trace of the smallpox pustules on him.

Rosa Anglica circulated in manuscript (i.e. handwritten) copies for nearly 200 years after it was first written. The first printed (i.e. machine-produced) edition was printed and published in 1492 by Franciscus Girardengus and Johannes Antonius Birreta in the city of Pavia, a substantial printing centre in northern Italy.  It’s this first edition that was Moore’s birthday gift to the RCP. It was clearly a popular and well cared-for book: copies survive over 500 years on in at least 82 libraries worldwide.

Chambre left more than his name in the Rosa Anglica: several pages are annotated with notes in the margins, and pointing hands known as manicules that seem to be in his handwriting.

Chambre left marginalia in several sections of the book. He clearly read the sections on the different kinds of fevers, – including the benefits of freshwater fish for those with hectic fever – leprosy, diarrhoea, female fertility, bathing, and on various prescriptions recommended in the text. 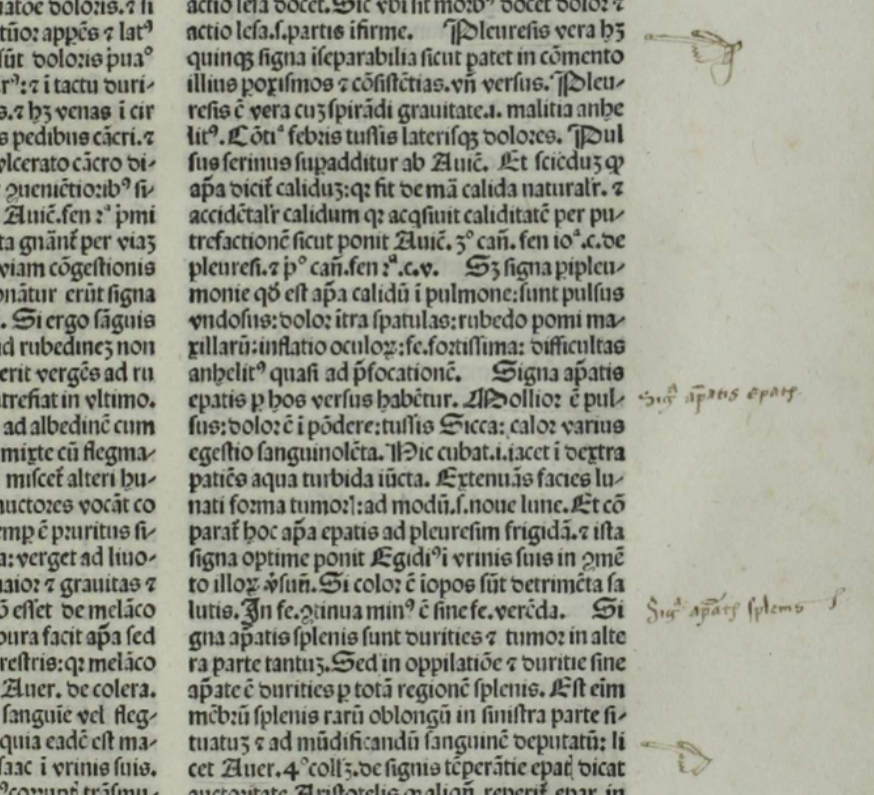 Another annotation in the Rosa Anglica can’t be attributed to John Chambre: two short lines added in Irish. The printed text at this point is Gaddesden’s account of curing the king’s son of smallpox, and the Irish marginalia refers to this incident. It’s possible that this note was added by Norman Moore, the generous donor who gave this book to the RCP. 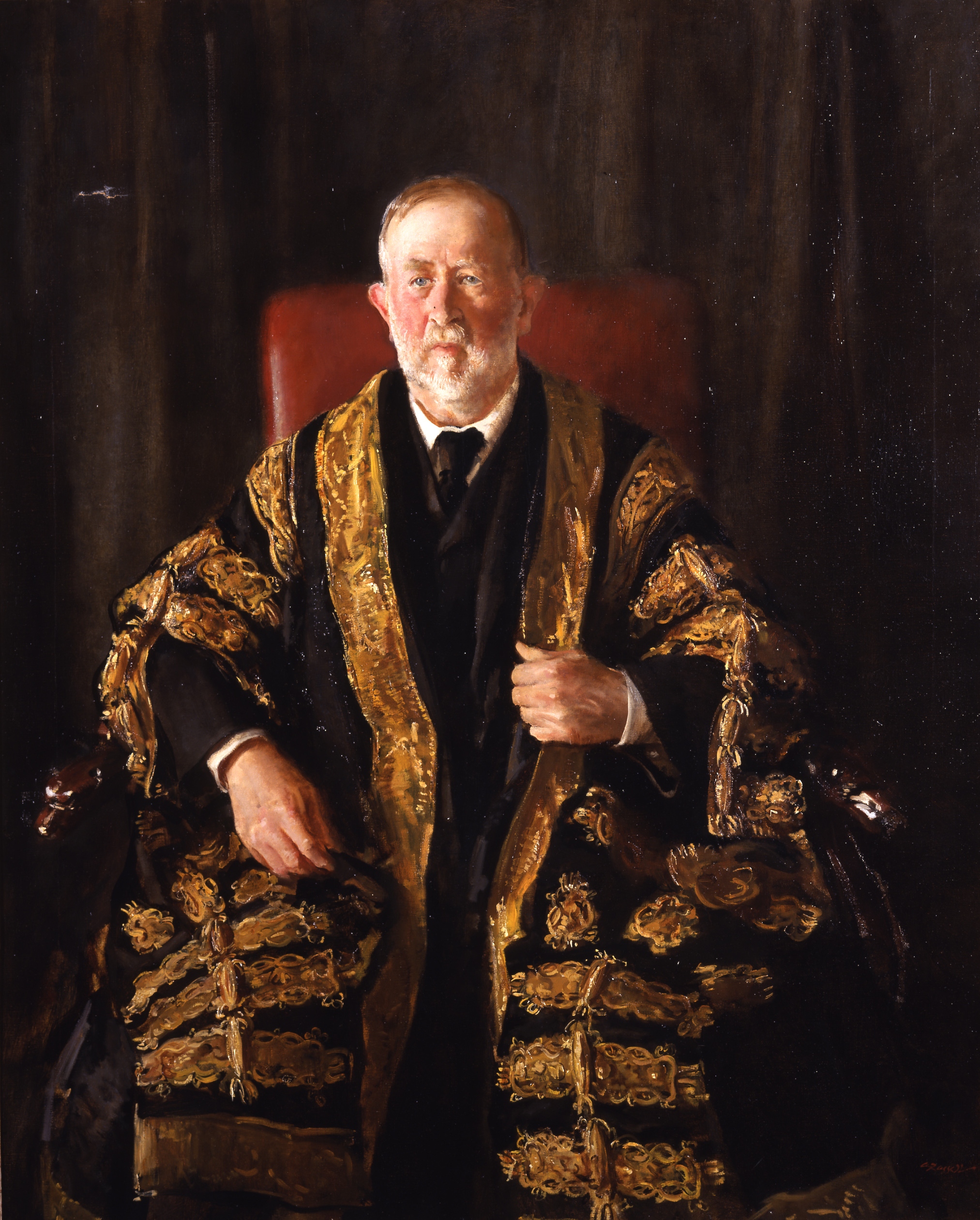 Sir Norman Moore (1847–1922) was a physician at St Bartholomew’s Hospital, London. He lectured on comparative anatomy, pathology, and medicine, and wrote The Pathological Anatomy of Diseases arranged according to the Nomenclature of the Royal College of Physicians. He was heavily involved in the RCP throughout his career and was made Harveian Librarian in 1910. He left that post when he was elected president of the College in 1918.

In addition to his medical interests, Moore was a keen historian who published a two-volume history of St Bartholomew’s Hospital and numerous short articles on aspects of RCP history. He contributed dozens of biographies of physicians and other medical people to the Dictionary of national biography (including the original entry for John Chambre). He had a keen interest in early printed books, and prepared small displays of examples for RCP events on themes such as ‘books in the time of Thomas Linacre’ (the first RCP president).

Moore was also a fluent speaker of Irish, and a scholar of Irish history, which makes him a likely candidate for the slightly puzzling lone Irish annotation to the Rosa Anglica. He also added a presentation inscription at the start of the book:

At the annual commemoration of benefactors and the completion of four hundred years since the foundation of the college, this volume in which its first fellow read the Rosa Anglica is presented to the Royal College of Physicians of London as a token of his affection for the college by Norman Moore, its President.

With thanks to Julia Walworth, David Rundle and Mark Thakkar for their assistance with the research for this post.