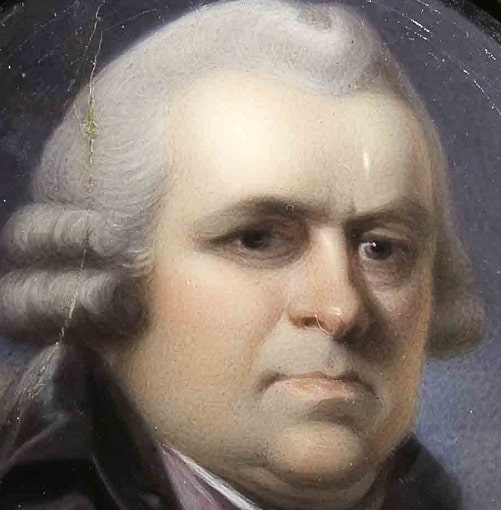 Sir George Baker, Bart., M.D. — This profound scholar and accomplished physician was born in Devonshire in 1722. He was the son of the Rev. George Baker, vicar of Modbury, and archdeacon and registrar of Totnes, by his wife, a daughter of Dr. Stephen Weston, bishop of Exeter. He was educated at Eton, and was transferred thence in July, 1742, to King’s college, Cambridge, of which society he was elected a fellow. He proceeded A.B. 1745; A.M. 1749; M.D. 1756; was admitted a Candidate of the College of Physicians 30th September, 1756; and a Fellow, 30th September, 1757. He commenced his professional career at Stamford in Lincolnshire, to which place he had been invited by a large circle of friends whom he had known in early life; but this was a situation too limited for the exertion of his talents, and about the year 1761 he removed to London, where he rapidly rose to the foremost rank in his profession. He filled in succession the most important offices in our College; was Censor in 1761, 1764, 1774, 1780; Harveian orator in 1761; Elect in 1780; and President, 1785, 1786, 1787,1788, 1789, 1790, 1792, 1793, 1795. He was successively appointed physician to the queen’s household, physician in ordinary to the queen, and physician in ordinary to the king (George the Third). He was created a baronet 26th August, 1776. Sir George Baker was a fellow of the Royal Society and of the Society of Antiquaries, and an honorary fellow of the College of Physicians of Edinburgh, and one of the foreign fellows of the Royal Society of Medicine of Paris. He resigned his office of elect in July, 1798, and died 15th June, 1809, in the eighty-seventh year of his age. He passed through a long life, singularly free from the ordinary diseases of man, or the infirmities of age. His death was consonant with his life, for he departed so easily, and apparently so free from pain, that the words of his favourite Cicero are said to have had in his death their nearest application: " Non illi fuit vita erepta, sed mors donata." He was buried at St. James’s, Piccadilly, and on a plain mural tablet to the north of the Communion table is the following simple memorial:—

Near this spot
are deposited the remains of
Sir George Baker, Bart.,
who departed this life June the 15th, 1809,
in the eighty-seventh year of his age.

No man ever followed the career of physic and the elegant paths of the Greek and Roman muses with more success than Sir George Baker. As a scholar he had few equals, and no superior. His "Dissertatio de Affectionibus Animi et Morbis inde oriundis," published as an exercise at Cambridge, in 1755, has been characterised by a kindred spirit and very competent judge, the late Sir Henry Halford, as one of the most elegant exercises of modem times. His Essays on the Cause of the Colic of Devonshire and Poitou are no less demonstrative of his attainments as a philosophical physician. They evince a rare union of acute but patient observation, extended inquiry, a just appreciation of the value of individual facts, and the most rigorous logical deduction. They present one of the best examples modem times have afforded of the method to be pursued in medical inquiries, and they constitute a model for all who are labouring to extend the boundaries of medical science. As a practitioner he was no less eminent. "The soundness of his judgment," writes Dr. Macmichael, " was acknowledged by all. To him the whole medical world looked up with respect, and in the treatment of any disease in the least degree unusual, if it was desired to know all that had ever been said or written on the subject from the most remote antiquity down to the case in question, a consultation was proposed with Sir George Baker. From his erudition everything was expected. Sir George Baker was particularly kind to the rising members of his profession, whom he encouraged and informed with great condescension and apparent interest. With studious habits and unassuming manners he combined great playfulness of imagination, as will appear from the two following specimens of Latin pleasantry: -

Which may be thus rendered in English —
Behold two brothers, how unlike their state!
One’s too indulgent, one too temperate;
Hence both are sick; but let not this alarm them,
The cure is in themselves, and will not harm them.
Let me prescribe, with caution, to each brother,
Food for the one, and fasting for the other.

On Mrs. Vanbutchel, who was preserved as a mummy at the request of her husband, Sir George wrote the following inscription. Under the superintendence of Dr. Hunter, Mr. Cruikshank injected into the arteries spirits of turpentine, coloured by vermilion. She died at the age of forty, and her body, thus preserved, was kept by her husband in his own house during his lifetime; at his death, his son presented it to the College of Surgeons where it is now to be seen in a mahogany case.

Sir George Baker’s merits (2) as a writer are to be estimated rather by the value than the extent of his works. He was the author of the elegant and classical preface to the Pharmacopoeia Londinensis of 1788. His Essays on the Devonshire Colic, &c., were published in the Medical Transactions of the College, but were collected into an octavo volume in 1767.

His other writings were —
Thesis de Affectibus Animi, &c.
Oratio Harveiana. 4to. Lond. 1761.
De Catarrho et de Dysenteriâ Londinensi Epidemicis, 1762. 4to. Lond. 1764.
Inquiry into the merits of a Method of Inoculating the Small-pox which is now practised in several counties of England. 8vo. Lond. 1766.

A fine portrait of this ornament of our College, by Ozias Humphrey, R.A., is in the College, and has been engraved by J. Singleton. It was presented by Sir Frederic Baker, bart., on the opening of the present College.