Skip to main content
George’s marvellous medicine: the RCP archives and ‘the madness of King George’

In November 1788, George III was removed from court at Windsor Castle and taken to his country residence, Kew Palace, at the urgent request of his household doctors – five senior fellows of the Royal College of Physicians. The king recovered within months, but his confinement was the start of a recurrent, episodic illness typified by erratic and psychotic behaviour that continued until his death in 1820.

RCP president Sir George Baker (1722–1809) served as the king’s senior physician. He was supported by Dr Richard Warren (1731–97), the wealthiest society doctor of his time; Sir Lucas Pepys (1742–1830), Dr Henry Revell Reynolds (1745–1811) and Dr Anthony Addington (1713–90). Addington was a retired physician summoned by the Prince of Wales – the only one of the five with a background in the treatment of mental illness. 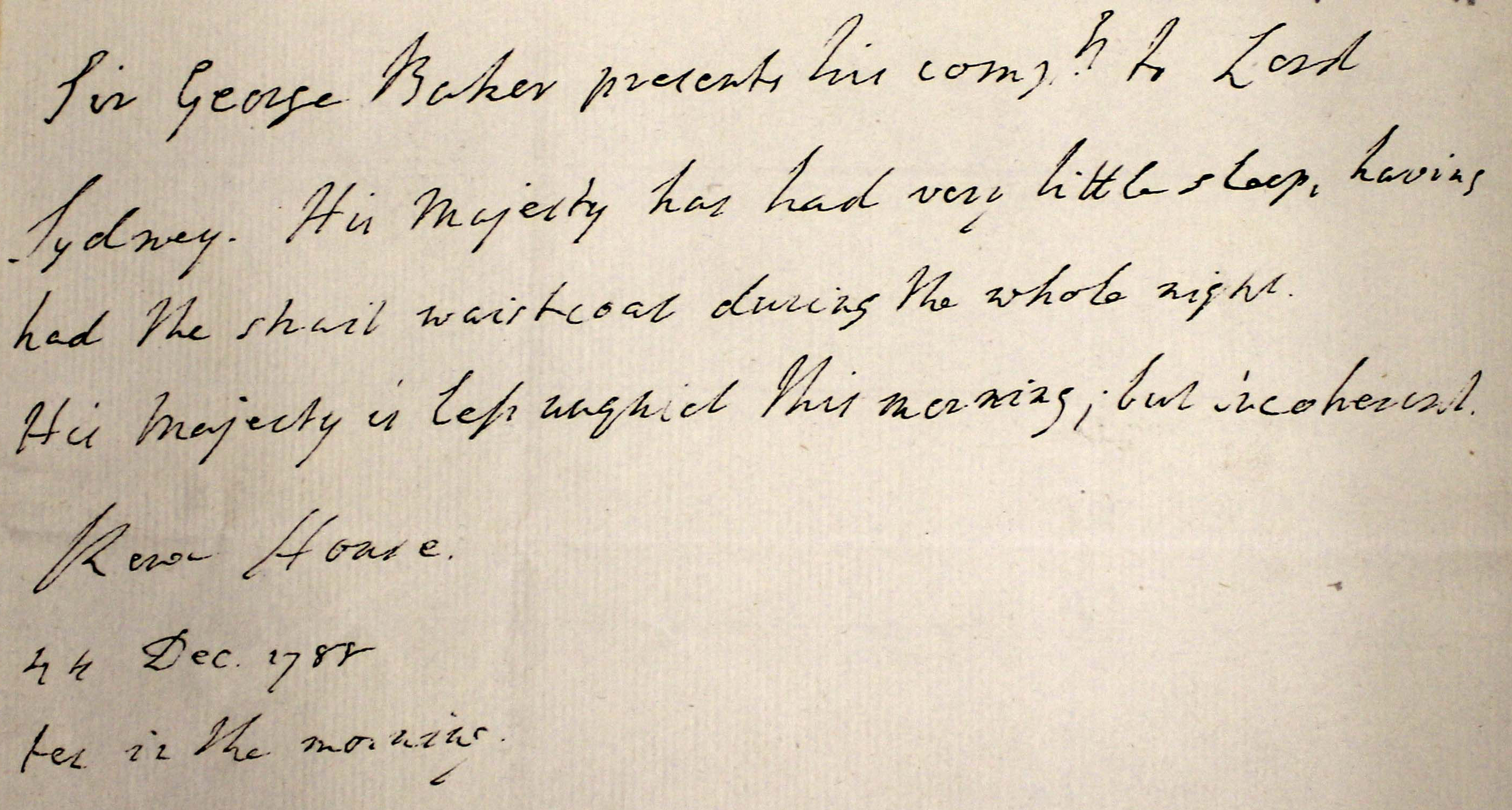 Bulletin on the king's condition from December 1788

A jointly-signed letter of the 27 November 1788 held in the RCP archives reveals that the five physicians recommended the ‘highly expedient’ removal of the king to Kew as ‘a change of place and objects is likely to facilitate his recovery’. The archives hold over 60 bulletins sent at 10am every morning to keep home secretary, Lord Sydney, updated on the king’s condition. The bulletins record the transition from the king’s initial ‘very much agitated’ state in December and wearing of ‘the strait waistcoat during the whole night’ to 'an entire cessation of his Majesty's illness' on 26 February 1789.

The restraining jacket was imposed by Dr Francis Willis (1718–1807) a country physician and ‘mad-doctor’ recommended by Lady Elizabeth Harcourt and regarded as ‘little better than a quack’ by the circle of RCP physicians. Baker and his colleagues instead relied on urine analysis, prescribed purgatives (including rhubarb, castor oil, senna, the highly toxic antimony, extract of gentian and emetic tartar) and subjected the monarch to a brutal regime of bloodletting and blistering. 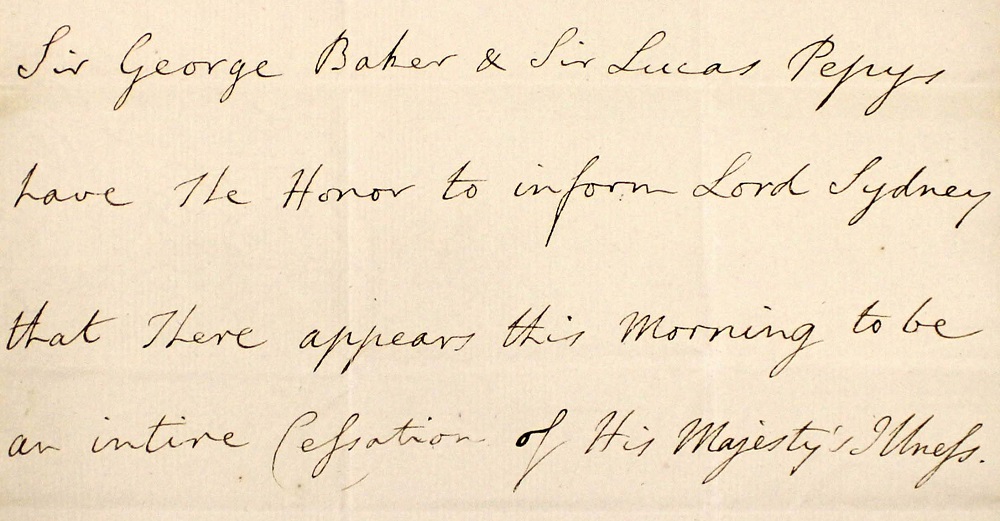 Bulletin on the king's condition from February 1789.

The story of the ‘madness of King George’ continues to fascinate today, intensified by the publication in 1966 of a claim that the king suffered from porphyria – a rare hereditary or acquired illness, which can result in neurological damage and mental instability. This retrospective diagnosis was given popular literary form by Alan Bennett in his 1991 play (and later film) and remains stubbornly widespread today.

Recent research over the last decade has established beyond doubt that the porphyria theory is incorrect and was reached as a result of a distorted and highly selective assessment of the evidence. Re-evaluation of George III’s clinical condition by Professor Timothy Peters and specialists at St George’s Hospital, London indicates that the king probably suffered from ‘recurrent bipolar disorder, with at least three episodes of acute mania, chronic mania and possible dementia during the last decade of his life’.

Read: George III’s illness and lessons for historians and The Blindness, deafness and madness of George III by Professor Timothy Peters

Read more about the RCP's library, archive, and museum on our blog, and follow @RCPmuseum on Twitter