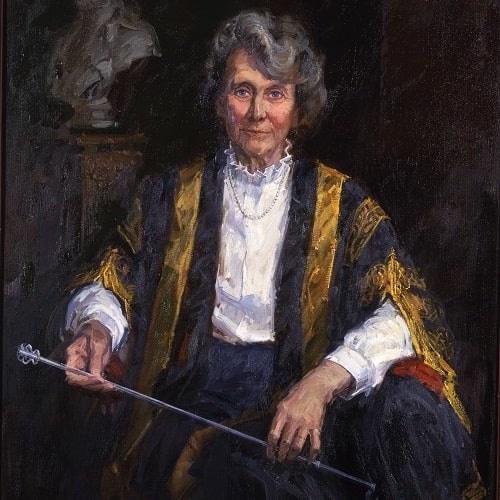 Dame Margaret Turner-Warwick was elected as the first female president of the Royal College of Physicians of London in 1989, 471 years after its foundation – one of her many remarkable achievements. At one stage in her career she was the only female professor of medicine in the UK. She is recognised as a principal architect of the modern specialty of respiratory medicine.

She was born at home in Smith Square, London; her father, William Harvey Moore, was a barrister from Devon, who stood for parliament several times, for Labour and as an Independent. Her mother, Maud Kirkdale Baden-Powell, was the daughter of Sir George Baden-Powell, MP for Kirkdale in Liverpool. From the age of nine the family lived in a small flat in the Inner Temple, where she attended the City of London School; from here they moved briefly to Kent, then to Exeter, where she learned to ride and joined the Girl Guides. However, in 1942, Exeter was badly bombed and the family returned to London, to a riverside Victorian house in Chiswick, where she learned to sail.

She went to St Paul’s Girls’ School and in 1943 won an open scholarship to Lady Margaret Hall, Oxford, to read medicine (one of the quota of seven females out of 100 students in her year). There she was on the fire watch rota at the Radcliffe Science Library, assisted in the Radcliffe Infirmary, grew vegetables, played the violin, was elected president of the junior common room, and in 1945 won the Welch prize for anatomy. She also met her husband-to-be, Richard Turner-Warwick, a fellow medical student and Oxford rowing blue. Her future seemed assured, when in 1946 she became aware of a lump in her neck and was diagnosed with pulmonary tuberculosis. This was just before the first effective anti-TB drugs came into use, and she was sent to a Swiss sanatorium, where she was treated with phrenic nerve crushes and induction of artificial pneumothorax – she underwent refills of the latter for five years. After nine months, she returned to study clinical medicine at University College Hospital (UCH), where she won several prizes including the Atchison scholarship for ‘student of the year’. She qualified in 1950 and married Richard at St Dunstan-in-the-West Church in Fleet Street: the reception was held at Apothecaries’ Hall.

She held appointments as a house physician at UCH, obtained her membership of the Royal College of Physicians during maternity leave after the birth of her first daughter, Gillian, and was a house physician at the Brompton Hospital, before returning to UCH in 1953 as a medical registrar. In that year, she and Richard moved into a family home in Highgate, north London, built on a plot given to them by Richard’s father. She worked for and obtained her DM in 1956 during maternity leave after the birth of her second daughter, Lynne. She returned to work as a registrar to Lord Amulree, geriatrician at St Pancras Hospital, and Liberal whip in the House of Lords. Having by now decided on a career in chest medicine, she returned to the Brompton as a registrar and became a chief medical assistant (senior registrar) in 1958. Here she obtained her PhD on clubbing and the pulmonary circulation in lung fibrosis, performing her own autopsies.

In 1961, she obtained her first consultant appointment, at the then Elizabeth Garrett Anderson Hospital in north London. In 1967, she became a consultant at the Brompton and London Chest hospitals, and part-time senior lecturer at the Institute of Diseases of the Chest; she recounts that she was appointed to the planning committee for the new Brompton Hospital, which opened shortly after she retired, 22 years after the committee first met!

When Guy Scadding, then professor of medicine at the Institute, retired in 1972, Margaret was appointed to his chair at what was renamed the Cardiothoracic Institute. She recruited academic physicians into the sub-specialties to which she had already contributed, including asthma, lung immunology, occupational lung disease and lung fibrosis, and ensured a close working relationship between the Institute and the Brompton hospital. From 1984 to 1987 she was dean of the Institute, which moved in 1985 from a prefabricated building in the grounds of the north block of the Brompton, to a much more spacious converted building (formerly St Wilfrid’s Convent) in Cale Street.

Margaret retired from medical practice in 1987. The following year she was treated successfully for breast cancer; and the Cardiothoracic Institute, where she was now professor emerita, was renamed the National Heart and Lung Institute. She was not to be idle, as she was elected president of the Royal College of Physicians in 1989. This was the time of major reforms of the National Health Service under Prime Minister Margaret Thatcher, including the introduction of the internal market; Margaret Turner-Warwick was constructively critical. There was also a looming workforce crisis in the NHS; Margaret created a manpower unit at the RCP to collect detailed and reliable data to use in pressing for expansion of the consultant workforce.

After demitting office, Margaret returned to Devon, serving as chairman of the Royal Devon and Exeter Health Care NHS Trust from 1992 to 1995.

During her clinical and research career, she published over 200 papers and several books, including a monograph on lung immunology. She established an international reputation in the field of respiratory medicine and research, and numerous honours came her way, including being made Dame Commander of the Most Excellent Order of the British Empire in 1991, and being named a ‘giant in chest medicine’ by the American College of Chest Physicians in 2014. When the Thoracic Society and British Thoracic Association merged in 1982, she was elected the first president of the new British Thoracic Society; she was a former council member and later vice president of the British Lung Foundation, a vice president of the national tuberculosis charity TB Alert, and chairman of the medical research committee of the Asthma Research Council. She received the president’s award of the European Respiratory Society in 1997, and the president’s medal of the British Thoracic Society in 1999. She sat on the Medical Research Council’s systems board, and the University of London senate, and was a trustee of the Rayne Foundation, chairman of the board of governors of Bedales School in Hampshire, and an honorary bencher of the Middle Temple. She held honorary doctorates of science from seven British universities. She gave many named lectures, including the Harveian Oration of the Royal College of Physicians, and was an honorary fellow of numerous national and international academic bodies. In 2015, at the age of 90, she performed the official opening of the Margaret Turner-Warwick education centre at the National Heart and Lung Institute.

Despite Margaret’s academic and administrative achievements, the care of her patients was always her principal consideration. She was also committed to her staff and was always supportive, and an excellent mentor; she helped launch the careers of many of the next generation of respiratory researchers. She could be formidable in debate and had exacting standards, but she possessed great charm and a mischievous sense of humour, and was always fun to be with, and keen to hear the latest news from her former institutions.

Outside medicine, Margaret had a wide range of interests. She loved music, and was a good violinist, and also a very competent watercolourist. In retirement she tended her garden, and also enjoyed windsurfing until late in life. She was devoted to her family and was proud that her daughter Lynne and granddaughter Tabitha both followed her into the medical profession. Margaret published an autobiography, Living medicine: recollections and reflections (London, Royal College of Physicians), in 2005.

Margaret died from complications of aortic valve disease at the age of 92, in the care of the Royal Brompton Hospital, London, where she had spent most of her working life. Her memorial service was held across the road in St Luke’s Church, Chelsea: it was packed full. Under a dark suit her husband Richard wore a colourful Fair Isle jersey; when he spoke movingly about Margaret he explained that she had knitted it for him while being treated for her tuberculosis in Switzerland.

She was survived by Richard, her daughters Gillian and Lynne, six grandchildren, and four great-grandchildren.