The RCP is about to commission a new portrait of our current president, Professor Jane Dacre, so it is a good moment to look back on the process of commissioning portraits, particularly of the two previous female presidents of the RCP.

80 years after the RCP first admitted women in 1909, Dame Margaret Turner-Warwick (born 1924) was elected to be the first female president. 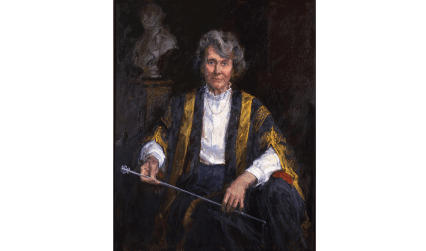 She was aware that this meant that the symbolism in her portrait – commissioned from David Poole – would be particularly important. Any objects included in a portrait can provide clues as to the status of the sitter: Turner-Warwick is depicted in the president’s robes, holding the silver caduceus. These symbols of office – gown and caduceus – have featured in portraits for hundreds of years. A sculpted portrait bust can also be seen in the shadows of the background, reminding the viewer that all the previous presidents had been male.

Interestingly, the portrait commissioned by the RCP is not on the cover of Turner-Warwick’s autobiography, Living medicine: recollections and reflections. The official portrait is inside the book, opposite the title page. Instead, there is a rather more intimate portrait by Jeff Stultiens (born 1944), suggesting that she felt that the official portrait was more about the office of president than about her personally. 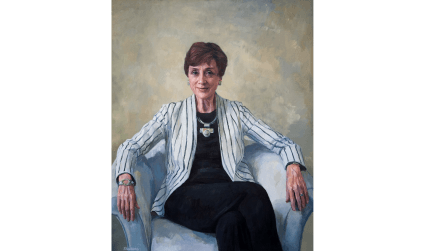 This was something that Dame Carol Black picked up on when it was time to commission her own portrait. She chose Stultiens as Turner-Warwick had done for her other portrait, expressing a desire to have her personality shine through the painting.

In an interview with the RCP’s curator in 2006, Black gamely answered questions about her approach to her portrait. She said that looking at Dame Margaret Turner-Warwick’s portrait, she could see that the symbols of office dominated, and she definitely did not want to be portrayed with them.

Black felt that her role was among the RCP fellows in hospitals and considered wearing a white coat, which would leave no question of where she belonged. In another portrait for Imperial College London, Turner-Warwick is portrayed in a white coat with her glasses around her neck, looking every inch the professional doctor.

The white coat has been around for about a hundred years – less time than the RCP president’s robes – but it is no less powerful a symbol. As a marker of authority it has, however, recently come to be seen as a barrier between doctor and patient.

In the end, Black opted for neither gown nor white coat, saying that that she had ‘tried to professionalise and modernise the College, so there didn’t seem any point in being dressed up’. The curator who interviewed Black suggested that the jacket she is wearing in the portrait is reminiscent of the white coat. Black denied that this was the intention, but this is a clear visual connection. 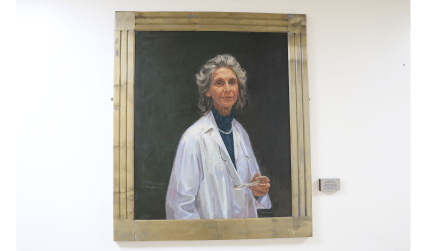 Multiple portraits mean that different aspects of Turner-Warwick’s professional and personal life could be expressed visually, without one painting have to convey everything about her.

The poses of both women are seated, arms open, facing the front and looking directly at the viewer, which shows their confidence and control. Black is in a ‘neutral space’, creating a sense of calm and not detracting from Black herself. Without the visual clues of presidency, the sense of Black’s status comes wholly from herself. Black said that her portrait was described by the treasurer as ‘too majestic’, because the depiction of a powerful woman was ‘threatening’.

Professor Dacre’s forthcoming portrait will coincide with the RCP’s 500-year anniversary. While the RCP will be celebrating this milestone in many different ways, Dacre’s portrait will be an important relic of this anniversary year. Professor Dacre will undoubtedly be thinking about how 500 years of history could be portrayed visually and symbolically, but she could equally discard that tradition and reinforce the new tradition of powerful women confidently looking out from the walls unencumbered by the past.

The RCP museum collection holds over 5,000 paintings, prints, busts and drawings. Most of the oil paintings can be viewed online at ArtUK.