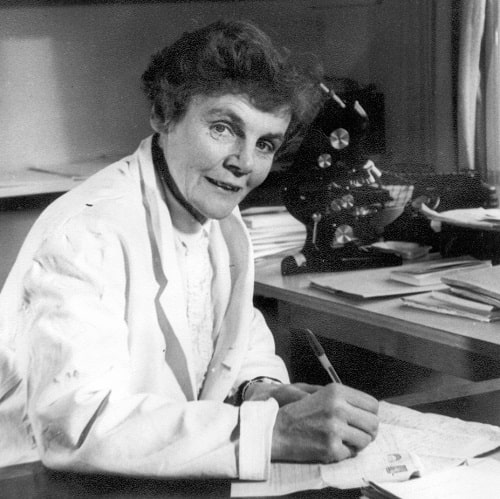 In 1996, a television documentary nominated Alice Stewart as one of the three most influential women scientists of the 20th century. Born into a distinguished medical family, she was the third of eight children, of whom four qualified in medicine. Her mother Lucy Wellburn qualified in 1902 at the Royal Free and married Albert Ernest Naish [Munk's Roll, Vol.V, p.302], a founder member and later president of the British Paediatric Association (now the Royal College of Paediatrics and Child Health).

Alice studied at Cambridge and the Royal Free, qualifying in 1932, becoming a member of the College in 1935 and a Fellow in 1946, at that time the first woman under 40 years old to be so elected.

Originally a physician in London, she was invited to become first assistant to L J Witts [Munk's Roll, Vol.VII, p.618] in Oxford and in 1947 succeeded John Ryle [Munk's Roll, Vol.IV, p.595] as director of the Nuffield Institute of Social Medicine there.

Her early landmark research for the MRC on the exposure of munitions workers to TNT could not be published until the end of the Second World War, but she is best known for her identification of the association of low dose radiation from x-rays during pregnancy with the later development of childhood malignancy. These findings were fiercely opposed by important vested interests, both within the medical profession and in the nuclear industry and government, including the US Atomic Energy Commission. Her seminal paper on this topic was published in 1956 and by the sixties this led to the virtual abandonment of x-rays during pregnancy in favour of the newly developed technique of utrasonography. The wider implications of the precise dangers of low dose radiation in other contexts remained a contentious issue some 50 years later at the time of her death.

Reaching the obligatory retirement age of 68 at Oxford in 1974, she transferred to Birmingham, where she continued active research for another quarter of a century. She became the recipient of numerous honours and awards and was in constant demand on the international lecture circuit into her nineties. She was a founder member of the Society for Social Medicine and of the International Epidemiological Association and a fellow or member of numerous other distinguished organisations, being an important and pervasive influence in developing the science of epidemiology as a tool for understanding the causes of human disease. Her goal was to switch from cure to prevention and in that she succeeded admirably.

In 1933 she married Ludovick Stewart, a teacher at Harrow. They had a son who predeceased her and a daughter who is a neuropathologist. The marriage was dissolved in the 1950s.