Alice Stewart’s research on the risks of X-rays to unborn children was ground-breaking, but made her unpopular. It took a long time for her 1958 paper to find recognition, but she carried on with her research into the dangers of radiation.

Enthusiasm for all things nuclear was at a high point in the 1950s. Following President Eisenhower’s ‘Atoms for peace’ speech to the United Nations in 1953, British and US governments invested heavily in promoting nuclear energy. In medicine, radiography was being used to treat an ever-expanding range of conditions, from acne to menstrual disorders, and pregnant women were regularly x-rayed to determine the position of the foetus in the womb.

It took a controversial, radical epidemiologist in Oxford, Alice Stewart, to begin to question this reliance on radiation. Her ground-breaking paper ‘A survey of childhood malignancies’, published 60 years ago this year in the British Medical Journal, was the first to link foetal X-rays to childhood cancer, crucially challenging the then widespread assumption that low doses of radiation were safe.

Alice Stewart (née Naish) was born in Sheffield in 1906. Unusually for the time, both of her parents were doctors. Her mother, Lucy Wellburn, qualified at the Royal Free Hospital School of Medicine and married Albert Ernest Naish, who became a founding member and later president of the British Paediatric Association. Her parents were determined that all eight of their children, daughters as well as sons, would have the same access to education. After schooling in St Andrews, Alice went up to Girton College, Cambridge to study natural sciences – one of only four women on her course. She later remembered her first physiology lecture: ‘When I stepped into the hall and took my first step, the students, all male, began stomping slowly and deliberately in time with my steps…. My first instinct was to duck into a seat and disappear, but no – every row was blocked by the men. I was forced down to the front row, where I found three other girls and a Nigerian.’ (Greene, 1999, p.40). Undeterred, Alice went on to the Royal Free Hospital for her clinical training, qualified and eventually became a registrar there.

By the outbreak of the Second World War, Alice was a consultant physician at the Royal Free and the Elizabeth Garrett Anderson hospitals in London. As male and single female doctors were gradually called up for war work, opportunities opened for married women clinicians and researchers. Alice, who had married a schoolteacher, Ludovick Stewart, in 1933 and had two children, moved to Oxford, where she was first assistant to Leslie Witts, professor of medicine at the newly re-established clinical school.

At Oxford, she began to develop an interest in epidemiology and industrial medicine after being asked by the Medical Research Council to investigate the dangers of exposure to TNT. In 1943, a department of social medicine was established at Oxford and Alice became first assistant to the professor, John Ryle. She was elected as a fellow of the Royal College of Physicians in 1946, at the time one of the youngest women to gain the FRCP.

Four years later, with the death of Ryle, she took over social medicine at Oxford, though the department was downgraded to a unit, funding was restricted and Alice was appointed as a reader rather than a professor. With no requirement to teach students, she had little to do.

Alice and her small, loyal team – David Hewitt, a statistician, and Josefine Webb, a medical researcher – decided to find a new subject to research, believing that if they succeeded they might convince the university of the validity of their approach to medicine. They chose childhood leukaemia, which in 1951 was still relatively rare, but was on the increase. Alice also had her own, personal reasons for the choice: her goddaughter, the child of a close friend, had died of leukaemia at the age of three.

The Oxford team looked at the existing statistics and saw that children between the ages of two and four seemed to be susceptible to lymphatic leukaemia, which Alice had a hunch might have been caused by a prenatal event. The team drew up a proposal for a retrospective study, with the then unique idea of directly asking the mothers. ‘I said, let’s go interview the mothers: they might have a memory of something prenatal that the doctors might have forgotten’ (Greene, 1999, p.79). The Medical Research Council’s committee on leukaemia turned down their request for funding, but they were given a small grant of £1,000 from the Lady Tata Memorial Trust.

The Oxford team found copies of the death certificates of children who had died from leukaemia and other cancers, and designed a questionnaire. 500 leukaemia deaths and 500 deaths from other cancers were matched with a random sample of 1,000 live children on the birth register in the same areas – giving 1,000 case control pairs. Alice decided to approach the medical officers of health across England, to ask for their help to arrange interviews with the mothers. Starting with a Dr Roberts, the medical officer for her hometown of Sheffield, a family friend, she got introductions across the country, eventually approaching all 203 departments in England in person, spending most of the £1,000 grant on train fares.

The link between the children’s cancers and antenatal x-rays was clear from the start. ‘We could see it quite early on, from the first thirty-five pairs: yes was turning up three times for every dead child to once for every live child, for the question, ‘had you had an obstetric x-ray?’ Yes was running three to one. It was an astonishing difference. It was a shocker.’ (Greene, 1999, p.83). Stewart and her team published their preliminary findings in The Lancet in 1956 and their definitive paper in the British Medical Journal in 1958. 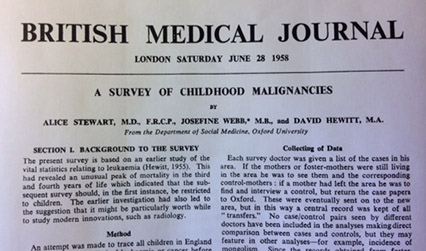 The Medical Research Council decided to test the findings of the Oxford survey by commissioning Michael Court-Brown, Richard Doll and Austin Bradford Hill to study the incidence of leukaemia among children known to have been exposed to x-rays in the womb. Their report, a prospective study of 39,000 children, involved a much smaller number of cases of leukaemia than Alice’s survey. Crucially, the study failed to find any link between x-rays in pregnancy and childhood cancer.

It wasn’t until 1962 that Alice’s findings were vindicated by Brian MacMohan in a paper in the Journal of the National Cancer Institute. MacMohan studied 734,243 children born in 37 maternity hospitals in the north-east of the United States from 1947 to 1954; instead of relying on the memories of mothers, the researchers reviewed the medical records of all who developed cancer, and of one per cent who did not, to determine the frequency of x-ray exposure in the womb. They found cancer mortality was around 40 per cent higher in the children who had been x-rayed. As a result of these and other studies, medical practice (slowly) changed, until, by the 1980s, foetuses were rarely x-rayed in the womb. 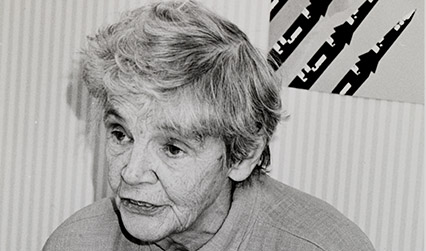 Despite MacMahon’s vindication of her work, Alice’s unit at Oxford was never awarded another Medical Research Council grant, her reputation declined and over the next decades she began to feel increasingly side-lined by her epidemiological colleagues. Richard Doll, who in 1969 became regius professor of medicine at Oxford, was dismissive of her later work. In a 1996 television documentary he commented on her methods: ‘She was a bit slap-dash, but that’s all I would say. She was very enthusiastic. She got a great deal of co-operation throughout the country, but she tended to accept results at face value without checking to test their accuracy.’ (Keating, 2009, p.312).

Undeterred, after her formal retirement from Oxford, Alice continued her work on the impact of low doses of radiation on human health, studying nuclear workers in the United States and in the process becoming a champion of the worldwide anti-nuclear movement.

The following sources were used when writing this post: