I have receyved heare a very unjust affront, being stayed and commanded by this podesta to have gone into the lazaretto, without any cause or suspition alledged.

These indignant words were written by physician William Harvey (1578­–1657) on 13 August 1636. He was ordered into quarantine in a lazaretto (plague house) by a local official (podesta) at the city of Treviso in northern Italy as part of measures to prevent the spread of bubonic plague (Yersinia pestis). 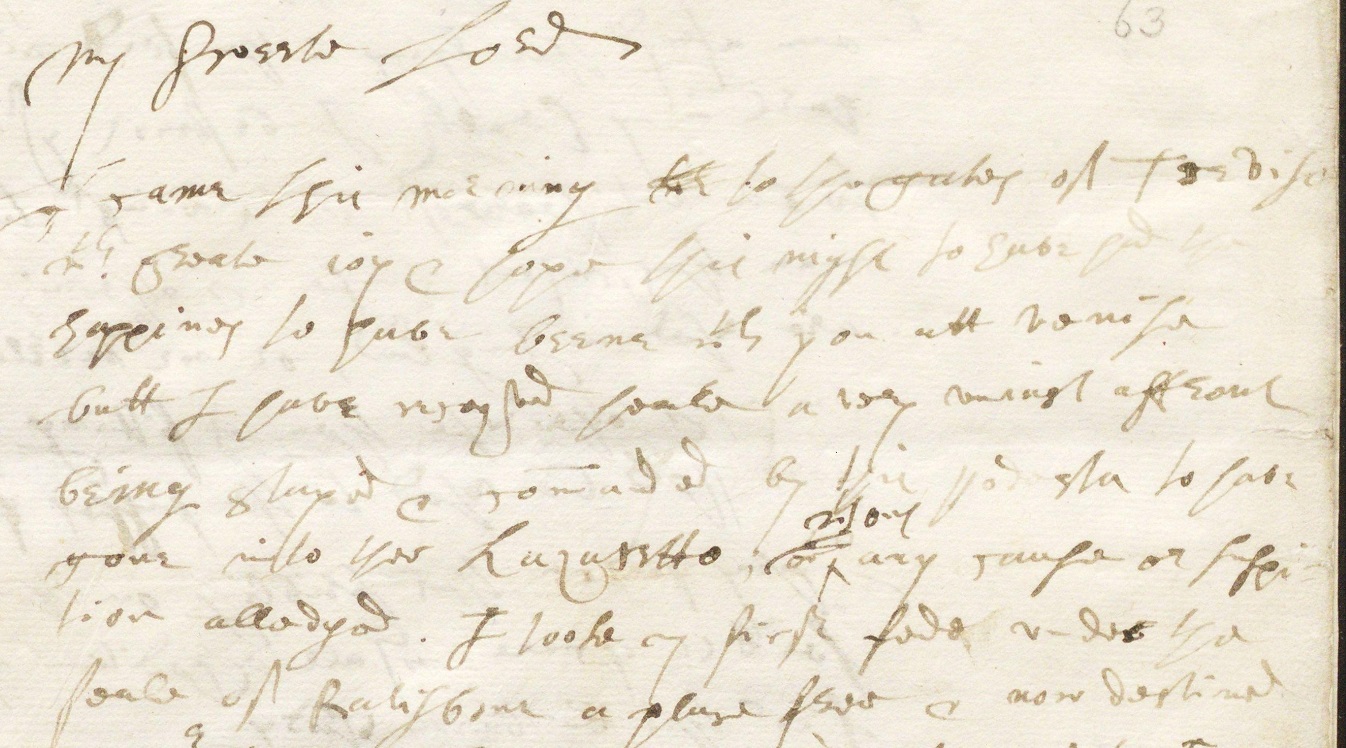 Harvey explained why he considered his detainment to be so unjust:

I tooke my first fede under the seale of Ratisbone … Since, in every place as I came, I caused my fede to be underwritten, soe that there is no ground for them to lay any suspition upon me

Harvey thought he should be allowed to pass freely through Treviso because he had a valid fede from each of the places he had visited. A fede di sanitá (certificate of health) was a postcard-sized printed form, issued by the authorities and filled with a travellers’ details in order to show that they and any goods they were carrying did not carry the plague.

Harvey was trying to get to Venice, 30 km south of Treviso. He planned to visit the English ambassador Basil Feilding (c.1608–1675), second Earl of Denbigh , who was serving as English ambassador-extraordinary to Venice, and it was to Feilding that he wrote these frustrated words. 11 of Harvey’s letters to Feilding, dating from from June to November 1636, are preserved in the RCP archives. They document his trip, from hopeful excitement, through mounting frustration and despair, to eventual release and relief. 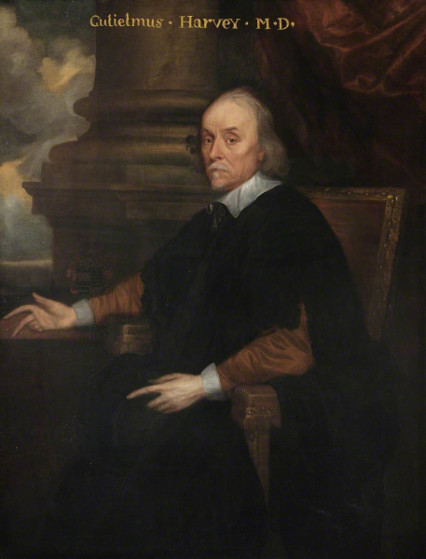 William Harvey is best known as an anatomist and physiologist, famous for having discovered and described how blood flows around the human body, pumped by the heart. His 1628 book on the subject, Exercitatio anatomica de motu cordis et sanguinis in animalibus brought him an international reputation, though many physicians of the time did not agree with his findings.

He was, however, more than an anatomist and researcher. He was a royal physician and an important member of the royal court. His 1636 journey was made at the king’s request: he was travelling as the official physician to the entourage of Thomas Howard, 14th Earl of Arundel. Arundel was making for the Austrian city of Linz, having been sent by King Charles I to lead a diplomatic mission to Emperor Ferdinand II concerning the Elector Palatine. This was part of the complex negotiations and battles of the 30 Years’ War that was raging across much of mainland Europe at the time: Harvey described Germany as ‘that ruined desolate country’.

En route, the group travelled via The Hague, Nuremberg (where Harvey gave an anatomical demonstration), and after arriving at Linz in June they went on to visit Vienna and the nearby medicinal spa at Baden bei Wien.

Harvey evidently wanted to take the opportunity to visit some of his old haunts; he had studied near Venice at the University of Padua at the start of the 1600s, working under the celebrated anatomist Fabricius ab Aquapendente (1533–1619). He made arrangements to leave Arundel’s group and visit Feilding, who had been appointed ambassador-extraordinary to Venice in 1634, and he was within a day’s travel of Venice when disaster struck. 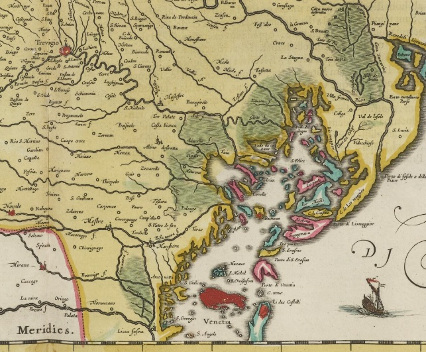 Map of north east Italy, with Treviso (top left) and Venice (bottom right) marked in red. Detail from ‘Territorio Trevigiano’ in Johannes Blaeu, Atlas Maior, (1662-5). Reproduced with the permission of the National Library of Scotland.

I came this morning to the gates of Treviso with greate joy, and hoped this night to have had the happines to have beene with you att Venise.

Unfortunately, it was at that moment that the podesta stopped him in his tracks. With his collection of fedi di sanitá, Harvey was adamant that he was in the clear and needn’t be kept in quarantine, but he was to be detained there for at least two weeks.

Panorama of the city of Treviso, Italy after Ludovico Pozzoserrato, drawn and engraved by Joris Hoefnagel in Illustriorum Italiae urbium tabulae (Amsterdam, c1650).

The control and distribution of fedi di sanitá was part of a well-established public health regime that had been developing across the Italian states and other parts of Europe since the arrival of bubonic plague in Western Europe in 1347.

The mechanism of plague transmission via infected rats and the fleas they carried was not understood at the time, and the prevailing medical theory was that of contagion via ‘miasma’ or ‘bad air’. This contagion was thought to be caused by dirty bodies, buildings and cloth, by putrefying matter and by general squalor. The bad smells which they emitted were believed to transmit the plague. It was therefore recognised that the movement of people and objects from place to place could spread the disease.

Control measures included cleaning and clearing infected places, disposing of infected cloth, and controlling the movement of people and goods. Different towns, cities and regions set up their own systems for managing these measures.

The earliest formal quarantines of incoming people, goods and ships are recorded in the trading city of Venice in the 15th century. From the 16th century, systems of certificates of health and non-infection for people, goods and ships developed. Local authorities issued formal printed documents known in Italian as fedi di sanitá or bolletini di sanitá. Local officials would inspect travellers for signs of disease and complete the form by hand if the visitor passed the examination.

‘To be gone from this place’

On 13 August 1636, the officials at Treviso alleged that there was a gap in Harvey’s documentation. Harvey was adamant that he had all the necessary papers, starting with certification from the Bavarian city of Regensburg (also known as Ratisbon), and then another at Villach in Austria. He believed that there was ‘noe neede’ for certification at Pontebba, which was considered free of plague, and though Harvey had no fede from Conegliano, his guide and the group’s horses were certified there, and Harvey had been told that this was sufficient for the whole party.

Harvey was so cross about the situation that he refused at first to enter the lazaretto, although he was later forced to do by ‘threatning of muskets’. After spending 6 days and nights in ‘a very nasty roome’ he reported on 19 August that he was suffering sciatica, leaving him unable to walk:

The ill diett I have heare, and the wors usadg hath produced this ill effect that now these two nights I have had a sciatique in my right thigh and legg that much discorageth me, and maketh me lame.

As he became more desperate, he started to suggest that the officials were really holding him for some other nefarious reason, and that quarantine against plague was just an excuse. He beseeched Feilding to come to his aid, bemoaned the lack of replies and suspected the local officials of not passing on his letters. By 23 August he had given up on ever reaching Venice. Harvey’s messages clearly were reaching Feilding: they were preserved in Feilding’s family papers at Newnham Paddox, Warwickshire until the 20th century. However, it’s not clear what aid Feilding could or did provide; he has been described as a ‘prickly and maladroit diplomat’, so he might not have been the most useful ally to Harvey.

By 26 August (the 14th day in quarantine) the sciatica had eased, but Harvey was clearly not in a good state of mind, not least because he had been told that he might have to wait 7, 10 or 20 days longer in the lazaretto. In his next letter to Feilding, he gave vent to a new fear: that the poor conditions would make him succumb to a normal disease, that the officials would mistake those symptoms for plague, and that they would keep him isolated for even longer:

I never longed for any thinge in all my life soe much as any way and on any condition to be gone from this base place and barbarous poeple and fearing lest I should be sick and then they would crye me into the plaug, and keep me and cheate and tyrunise over me, God knoweth how long.

Just at the point where Harvey’s situation and mental state seem to be hopeless, we encounter a three-week gap in the correspondence. We next hear from him on 17 September, when he wrote to Feilding from Florence. He thanked Feilding for ‘all the favour I have receyved att my being att Venise’: so he evidently did manage to visit the ambassador in the end. Perhaps Feilding had managed to secure his release, or perhaps Harvey had simply served the required time in the lazaretto (quarantines weren’t always the 40 days which the name suggests). In either case, by 17 September Harvey had already been in Florence for some days, and was in good spirits, having ‘enjoyed much contentment therin, with health and mirth’. He eventually returned to the Earl of Arundel’s group at Regensburg in November 1636, and they were back in England around the end of December 1636.

Isolation and quarantine: then and now

It’s easy to assume that people who lived through the epidemics of the past became inured to the difficulties and privations caused by illness and also to the taxing counter-measures which were deployed against its transmission.

Harvey’s letters give us cause to rethink this. We can’t know at this distance whether his paperwork really was completely in order or not. But whether he was detained at Treviso legitimately or in error, his increasingly frantic messages to Feilding show us that then, as now, necessary restrictions on travel could be a cause of frustration and that even people who agreed with them in principle might still plead for personal exceptions to be made. They illustrate how any system of bureaucracy to manage and document people’s lives and activities, however necessary and important, will always be subject to suspicion and mistrust on one side and potential error and confusion on the other. Official and personal responses to epidemic diseases have, in some respects, changed little over the course of nearly 400 years.

As a leading health organisation aimed at improving patient care and preventing disease in the UK and globally, the RCP takes seriously its responsibility to support efforts to protect communities from COVID-19, now designated a pandemic by the World Health Organization. The RCP COVID-19 web page is regularly updated.

Regimen against the plague

The RCP library contains many important early medical books. Some are magnificent and spectacular tomes, lavishly illustrated or inches think. Others, however, are much humbler.

Plague remedies from the garden

This week 350 years ago, fear gripped the City of London and surrounding areas. An outbreak of plague had taken hold and after a slow start, more than 1,000 people were dying each week.

For the cure of the plague

In spring 1665 London was worried. It was apparent that plague had taken hold of the city. No-one knew at the start just how disastrous it would be; the epidemic killed somewhere between 75,000 and 100,000 people in a city with an estimated population at that time of 460,000.