We welcome lots of researchers into the RCP library reading room. Most of them come with a laptop, or with a good old notepad and freshly sharpened pencil. Sometimes, however, they bring a bit more kit. In today’s post, Harriet Phillips, an academic at Queen Mary University of London, reveals the digital analysis she’s been undertaking of some of the works of the physician and writer Sir Thomas Browne (1605–1682).

How do you make a book? I have been thinking about this question since 2013, when I joined the editorial team behind the new Complete Works of Sir Thomas Browne for Oxford University Press. This is a monumental undertaking, involving a cast of if not quite thousands then certainly well into double figures, spread over multiple time-zones. The first Works since 1964, these eight volumes will offer the most comprehensive, accurate, and up-to-date version of Browne humanly possible.

I am editing, together with colleagues, Browne’s Pseudodoxia Epidemica, or ‘Enquiries into Vulgar and Common Errors’. Pseudodoxia, which seeks to identify and to correct errors in the received wisdom of the 17th century, is a landmark in the public understanding of science. At 448 pages in the final edition, it is a monument both to Browne’s own astonishing scholarship, and to the crushing inevitability of human error.

In making Browne’s text available for readers in the present, we have to think about how it reached readers in the past. I say ‘text’, but Browne continually updated and revised his work between its first publication in 1646 and the final edition in 1672. Six editions were published during his lifetime, all of which are slightly different. Finding these changes is relatively easy, if time-consuming. But there are also differences within editions. 17th century printing was a process of many moving parts, and people. A print run of (say) 5,000 copies, which is a reasonable estimate for the first edition of Pseudodoxia, would take several days. In that time, mistakes were almost always made.

Here is page 168 in two different copies of Pseudodoxia’s 1672 edition. They look identical, but there is in fact a small difference. Browne is writing about whether or not moles are blind. In the image on the left line 32 reads ‘…instead of a callgation or dimness, we conclude a cecity or blindness.’ On the right, it reads ‘caligation’.

This second version, in one of the RCP’s copies (shelf reference D2/54-f-4), is correct. What this difference means, almost certainly, is that after printing the page that ended up in the first copy, someone in the printing house noticed the mistake and corrected it. They didn’t bother redoing the sheets already printed, however, which is why some surviving copies have the mistake and some don’t.

This process of comparing textual differences between different copies of the same edition, using a selected copy as the base text, is called ‘collation’. Collating variants in this way allows us to reconstruct at least some of what went on in the printing house. It shows us that changes were made right up to the very last minute, even in the very act of printing (‘stop-press corrections’). These changes, at least those I have found (so far!) in Pseudodoxia, are typically small and pragmatic: a stray character here, a slipped line there. Taken together though, they allow us the fullest possible view of Browne’s text at the very moment in which it entered public view.

The simplest way of finding these variants, and in the past the only way, was by eye. The editor looks from one copy to the other, line by line, word by word (the ‘Wimbledon method’), trying to maintain a hyperalertness to minor differences. Once this could only be done in rare books libraries with plural copies of the target book, or required the editor to have their own physical copy with them, although now images of a base text can be transported via laptop. Collating variants in this way, especially for long books like Pseudodoxia, is challenging: not only because it is intensely boring, but because you have to continuously disrupt your brain’s desire to make meaning by filling in gaps. In the example above, it requires effort and awareness to register “callgation” (not a real word) as a distinct variant, rather than automatically substitute “caligation” (a real word, which makes sense in context).

The aim of collation is to look, not read. The method which editors have most often relied upon to short-circuit the reading process is to overlay both texts being collated and then search for visual discrepancies. This can be done in a low-tech way, by making transparencies of the base text and laying them on top of the comparator texts.

More elaborate old-tech methods of optical collation rely on the use of mirrors to overlay images in the brain of the editor: either via the large, stationary Hinman Collator, found in a handful of rare books libraries, or Carter Hailey’s ‘Comet’ portable collator.

Hailey’s Comet is effective, but has significant downsides. It takes time for the editor to train their brain into successfully overlapping the images in their field of vision, and then “seeing” the differences. In my case, I experienced these variants as peaks of acute visual discomfort in an already exhausting process. Others have reported headaches and nausea. Even setting these aside, it is time-consuming and fiddly. The mirrors must be set up at precisely the right angle, which varies according not only according to the library, the book, and the individual copy but also according to where you are in the book, and so must be continually adjusted and readjusted. All of these adjustments must be accomplished with the narrow band of flexibility offered by mirrors, since the rare books themselves cannot be manipulated or placed under any kind of pressure.

Happily, problems of visual comparison are increasingly solvable digitally. The Oxford Traherne editing project has just developed a digital collator, consisting of a free software package and some camera equipment.

The basic principle is that you photograph the copy you want to compare, using a specially designed camera support which allows you to take as flat an image as possible, and then the collator software compares these pictures to a parallel image of set of the base text. 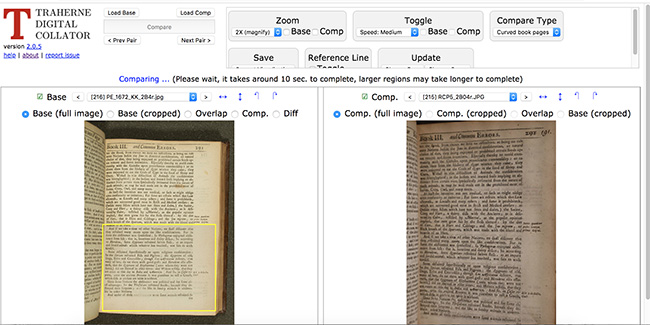 This shows two images of page 191, in which the phrase “observable in” from the base text appears as “observablei n” in a copy in the RCP library (<D2/54-f-6 >). The software lets you lay both texts on top of one another in a single image, like Hailey’s Comet without the eye strain or dizziness.

You can render one text in red and the other in blue, so that variants stand out even more clearly. Here is a detail of page 191 in another copy from the RCP library (D2/54-f-5), in which “observable in” appears as “observablein”. Here the base text is blue and the RCP copy is red, and the difference is clearly distinguishable.

You can even toggle in between the two.

There are massive advantages to digital collation, both in speed and accuracy. Currently the system asks you to shoot first and ask questions later – take the pictures, then digitally compare – but it may soon be possible to run the software in tandem with the camera, photographing and collating simultaneously. In outsourcing visual comparison to the software, it avoids both the problem of ‘reading’ and the discomfort of trying to trick your brain into ‘seeing’. It can also be adjusted for page curvature –  which in tightly bound old books can be a real problem for collation – producing an image which is as nearly two dimensional as possible. In my session at the RCP library in August I was able to photograph three copies of Pseudodoxia in two days, and subsequently collate them over the following 10 days. This might as well be warp speed in collation terms, achievable because of the enormously helpful library staff who made space for me, facilitated my equipment set-up, and even let me leave it there overnight. This kind of support is totally invaluable.

The kinds of variants I have been talking about are fairly trivial, and the stakes might seem accordingly small. While it is possible that collating some kinds of text – notably short, topical, or controversial ones – might reveal more dramatic evidence of late-stage intervention, this hasn’t so far been the case for Pseudodoxia and this is probably more typical. Instead, the importance of this work is in showing how printed books make meaning, at the most concrete and granular level.

The painstaking and scrupulous pursuit of a more perfect understanding is a profoundly Brownean enterprise. Thomas Browne (1605-82) was a doctor and polymath, who wrote extensively on problems of knowledge and doubt. He was deeply committed to the project of human knowledge, however flawed such an enterprise must be, and Pseudodoxia is his magnum opus.

Browne saw his great work of correcting error as an essentially redemptive act, by which ‘we may in some measure repair our primary ruines, and build our selves Men again’ (From his ‘To the reader’ introduction to Pseudodoxia). He also understood that the copying and transmission of knowledge down the ages played a key role in the ‘transcriptive’ propagation of error, so that ‘knowledge is made by oblivion, and to purchase a clear and warrantable body of Truth, we must forget and part with much we know.’ In revealing the persistent creep of error, collation makes visible the difficulties of constructing and communicating knowledge in the material world.

Rare books from the RCP library are available for research by appointment. The collection is catalogued online. Please contact the library to make an appointment or if you have any enquiries.