We're in the last stages of installing our new exhibition, This vexed question: 500 years of women in medicine, which opens to the public on 19 September 2018. We've been planning it for over a year, and curator Kristin Hussey has answered some questions about the planning and the exhibition content.

How long has it taken to organise 'This vexed question' and what’s gone into its development?

DR KRISTIN HUSSEY: I first proposed this exhibition in the spring of 2017. We were in the process of organizing our RCP500 anniversary season and it didn’t feel right to me to do only an exhibition about William Harvey. Harvey is a fantastic physician, anatomist and Fellow of the college, but I thought in our anniversary year we ought to be asking bigger questions about our history and our role in the history of medicine.

Supporting women doctors is something that’s so important to the RCP today, but it’s not something we have done well historically. It’s why I thought it would make an interesting and important theme for a public exhibition. We have been working to develop the exhibition over the last 14 months and it has involved a huge number of people including curators, conservators, designers, editors and our generous external lenders and experts to make it happen. It really is the most ambitious exhibition we’ve done to date.

What kind of subjects can we expect in the exhibition?

I think visitors will be surprised to see the diversity of people and eras that the exhibition covers. It was really important to me that we consider the whole sweep of women in medicine across 500 years and not focus just on the heroes everyone knows like Elizabeth Garrett Anderson (although I am really pleased we were able to borrow her qualifying certificate from the Society of Apothecaries).  In order to tackle such a big period of history, we’ve approached the exhibition thematically – thinking about unifying themes which have been basically the same whether its 1518 or 2018. These are topics like ‘acceptable spheres’ – the areas of medicine where women were able to find a space to develop or ‘kitchin physic’ – the ways in which women have served as primary caregivers in the home throughout history. 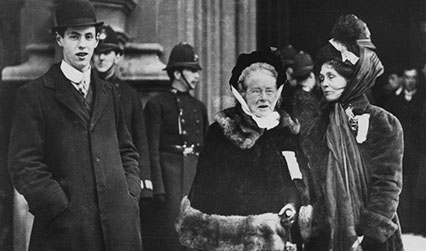 It was also really important to us that the exhibition include as many voices as possible – we want to introduce visitors to new women they may never have heard of. By drawing on these voices of the past, I think we can also uncover debates and disagreements along the way. We called our exhibition ‘This vexed question’ to give a sense of this on-going debate. What it means to be a woman and a doctor is hugely personal – if you’d asked Elizabeth Blackwell, Elizabeth Garrett Anderson and Florence Nightingale they would all have given you completely different answers. We wanted to reflect that diversity of experience.

Telling such an ambitious story has meant that we have worked with a wide variety of external collaborators to bring together this fractured history of women doctors that you won’t find in a text book. It has been really fantastic to work with organisations like Lambeth Palace Archives, the Imperial War Museum, the Royal Pharmaceutical Society, the Florence Nightingale Museum and the Royal Free Hospital who have generously lent objects, archives and artworks for the exhibition. I know I shouldn’t play favourites – but the Imperial War Museum’s painting of An Operation at Endell Street Military Hospital is just so powerful. The doctors and surgeons of this all women military hospital completely changed the perception that women could only treat women patients. Deeds not words was their motto!

Is there anything that surprised or shocked you in the exhibition, what were some of your personal highlights?

This was a really tough subject to work on – it is actually really emotional to read some of the stories of the challenges women in medicine have faced in the past and today. For example, Isabel Hutton was an amazing Scottish physician who worked in the First World War but had to resign her position at the Royal Edinburgh Hospital after she got married. Marriage bars were just one of the institutional mechanisms which served to exclude women doctors in the 20th century.

I think one of the most upsetting stories for me was around the force-feeding of suffragette inmates at Holloway prison. One of the really key pieces we have in the exhibition is a handkerchief which was signed by survivors of hunger strikes at Holloway including the Liverpudlian doctors Alice Ker. Women doctors like Ker spoke out against the practice – saying it had no medical merit and was being used punitively. Unfortunately, the RCP president at the time wrote in the Times in support of force feeding at Holloway, saying it was only being used for medical benefit. It’s hard to read about these moments which show the medical profession on the wrong side of history.

Can you talk us through some of the landmark pieces/eras that are going to be represented?

I think visitors will be surprised by the breadth of eras that we cover in the exhibition. I was really surprised to learn about the women doctors who were qualified to practice medicine long before Elizabeth Garrett Anderson or Elizabeth Blackwell.

I had assumed that women in medicine before about the 1850s were going to be women practicing informally or in the home. That’s absolutely not true – we know that women were earning a living as doctors, as surgeons and as apothecaries for as long as the RCP has been around. Actually, the Archbishop of Canterbury was formally licensing women doctors to practice as early as the 1600s! So I’m really pleased that we are going to feature some of these 17th century testimonials from the Lambeth Palace Archive. 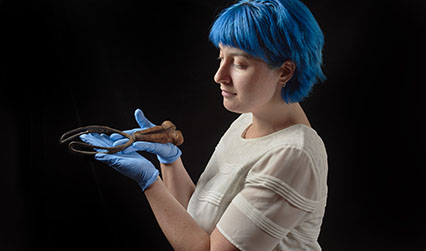 Many of the fiercest debates around gender and medicine have focused on midwifery – traditionally the domain of women but one that was increasingly masculine in the 18th century with physicians like William Hunter. One of the crucial discussions centered around the use of forceps and other surgical tools during birth – which made the practice more ‘surgical’ and therefore the domain of male practitioners. We are very lucky to have some original forceps invited by William Smellie on loan to us from the Royal College of Obstetricians and Gynaecologists.

We have also done a lot of work to try and uncover some of the RCP’s own hidden histories around women. We know for example that we began to admit women licentiates and members in the early 20th century, but knew very little about these individuals. We were able to find out more information and even identify a picture of our first female licentiate, Dr Dossibai Patell, who went on to receive an MBE for her work in the Second World War and became the first woman president of the Association of Medical Women in India.

The exhibition really focuses on the period up until women become Fellows of the RCP in the 1930s, although we’ve tried to tie in some more contemporary links as well. We are including a piece of advertising from the 1980s of this screaming child with her mother – playing on the trope that women are the primary care givers in the home. It makes me laugh.

How important is it in 2018 to have an exhibition like 'This vexed question' dedicated to women in medicine?

[This year] has really prompted British society more widely to think about the stories of women and how we represent and value that history. The Vote100 movement to celebrate 100 years since some women were granted the right to vote had generated a huge amount of attention – and I wanted to make sure that women doctors were a part of this story.

It’s also 100 years since the end of the First World War, and again women doctors, nurses and surgeons played a huge role in that conflict and we wanted to make sure their stories were acknowledged. Let’s not forget it was also recently NHS70 – the NHS heralding a new period in medicine where women doctors were theoretically placed on an equal playing field with men. 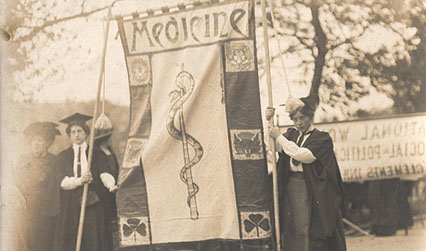 Medicine banner at a suffragette March, 1908, The Women's library collection at LSE

But importantly 2018 is our own anniversary, and when you look back over our 500 years of history some of it is glorious, and some of it is more complex. The RCP’s role in actively excluding women from medicine for most of its history is one that needs to be tackled, especially if we are to understand the challenges that still face women doctors today. The exhibition isn’t just critical though – I hope that it’s a story of hope that speaks to women practitioners today.

Even in times when it wasn’t legal to train or practice as a doctor or surgeon, enterprising women have always played a key role in looking after the wellbeing of their friends, families and communities. I want women doctors today to look to the past and hear some of these fascinating voices of strong women from history and know they are in a long line of enterprising, determined women who have changed medicine.