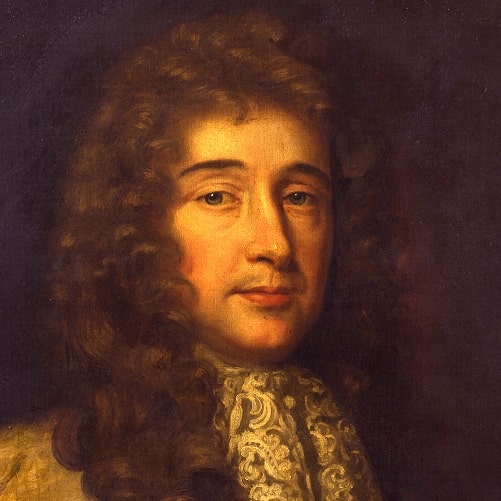 William Croone, M.D., was born in London, and educated at Emmanuel college, Cambridge, where he was admitted a pensioner 13th May,1647. He graduated A.B. 1650 - the following year was elected fellow of his College, and he commenced A.M. in 1654.

He was chosen professor of rhetoric at Gresham college in 1659, and shortly after this was appointed secretary of the Royal Society, which then held its meetings at Gresham college, where Croone, as one of the professors, had apartments. In 1663 he was created doctor of medicine at Cambridge by royal mandate.

He was admitted a Candidate of the College of Physicians 25th June, 1663; a Fellow 29th July, 1675; and was Censor in 1679. Dr. Croone was appointed lecturer on anatomy at Surgeons' hall in 1670, and then resigned his professorship in Gresham college. He was one of the original fellows of the Royal Society.

He died of fever 12th October, 1684, and was buried at St. Mildred's in the Poultry, in a vault of the Lorymer family under the communion table. On a floor stone was an inscription commemorating John Lorymer, Esq., and Frances his wife, with the following:- Here also is buried Dr. Croune, one of the fellows of the Royal Society, and of the College of Physicians in London, who died the 12th October, 1684, and left behind him his sorrowful widow, Mary Croune, daughter of the said John and Frances Lorymer: which said Mary afterwards intermarried with Sir Edwin Sadlier, of Temple Dinsley, in the county of Hertford, Bart., and lyes interred here. She died 30th September, 1706.

Dr. Croone contributed to the Philosophical Transactions some curious and original observations, "de Ovo," long before Malpighi's book on that subject appeared, and anticipating many of the statements made therein. He also published a small treatise-
De Ratione Motûs Musculorum 12mo. Amst. 1676.

Dr. Croone left behind him a plan for two lectureships which he had designed to found; one to be read before the College of Physicians, with a sermon to be preached at the church of St. Mary-le-Bow; the other to be delivered yearly before the Royal Society upon the nature and laws of muscular motion. But, as his will contained no provision whatever for the endowment of these lectures, his widow (a daughter of Alderman Lorimer, of the city of London, who subsequently married Sir Edwin Sadlier, Bart.) carried out his intention, by devising in her will the King's Head tavern, in Lambeth-hill, Knight Rider-street, in trust to her executors, to settle four parts out of five upon the College of Physicians, to found the annual lecture, now called the Croonian lecture; and the fifth part upon the Royal Society.

To obviate some difficulties in carrying out the intentions of the testatrix, the premises, by indentures of lease and release dated 29th and 30th of April, 1729, were, in pursuance of a decree of the Court of Chancery, conveyed to the College of Physicians, in trust, to perform Lady Sadlier's will. The property was let by the College in 1789, on a building lease of ninety-nine years.

Lady Sadlier also founded an algebra lecture at each of the colleges at Cambridge, seventeen in number; that at Emmanuel college - where Dr. Croone was educated - being endowed with 60l per annum, those at the other colleges with 40l.

The fine portrait of Dr. Croone in the Censors' room, painted by Mary Beale, was presented to the College 13th June, 1738, by his relation and godson Dr. Woodford, Regius Professor of Physic at Oxford (1).