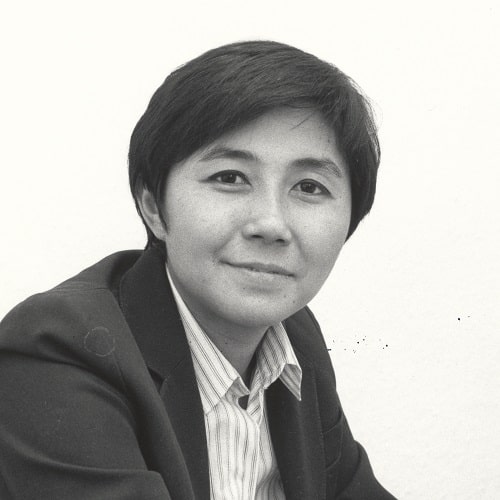 Vicky was born in Hong Kong, the daughter of Teddy and Susie Yip. She moved with her family to East Grinstead at the age of seven, and was educated at the Notre Dame Convent, Lingfield, and East Grinstead County Grammar School. She gained an exhibition to Girton College and graduated in 1971 with a double first in the medical sciences tripos, archaeology and anthropology. She then studied medicine at St Thomas’s Hospital medical school and obtained her MB in 1974. She continued working at St Thomas’s, progressing to senior house physician in neurology and thoracic medicine.

In 1976 Vicky moved to St Bartholomew’s Hospital to take up the post of registrar in the medical professorial unit, and was later awarded the Aylwen bursar appointment as a research fellow in the department of endocrinology. There she carried out innovative research into enkephalins and endorphins, and contributed to more than 30 published papers, including one showing the scientific basis for acupuncture.

In September 1982 Vicky learned that she had advanced ovarian cancer and, in her own words, she ‘crossed the divide from doctor to patient’. For the first time she fully understood the emotions and problems faced by patients and their families, their feelings of uncertainty and isolation and their need for information which combined accurate medical knowledge with the practical aspects of coping, which most patients learned by experience. She became aware of the importance of better communication between patients with cancer and their families and friends, and the health professionals working with them. After briefly resuming her medical career, she decided to found a charity which would provide information, practical advice and emotional support to all cancer patients and their families. Vicky described her own experiences as a cancer patient and her reasons for founding BACUP in an article entitled ‘Cancer and beyond: the formation of BACUP’ which was published in the British Medical Journal, 1985, 291, 1021-23.

Vicky set about this task with characteristic energy, single-mindedness and professionalism, gaining the support of senior medical colleagues, other cancer organizations, and individual patients, their relatives and friends. She also visited America to see the services provided by the National Cancer Institute and the American Cancer Society. BACUP (the British Association of Cancer United Patients) was registered as a charity in October 1984, with Vicky as chairman and honorary director. Just twelve months later, the National Cancer Information Service was launched, with specially trained senior cancer nurses providing information and emotional support by telephone and letter. By the time of Vicky’s death, a year and a half later, there were six full-time nurses responding to more than 1,500 enquiries per month; more than 20 booklets and leaflets about cancer had been published, and BACUP News, cancer patients’ own newspaper, was in its 4th issue.

Throughout this time Vicky was receiving treatment but made the most of the time that she had, when necessary directing BACUP’s development from her hospital bed with a mobile phone and always enthusiastic to present BACUP’s latest achievements in interviews with the press and TV. She reassured everyone that despite her increasing debility and constantly changing expectations she enjoyed a good life, taking the greatest pleasure not only in her successful establishment of BACUP as a service to cancer patients and their families, but also through sharing her personal delight in music, food and gardening, with her own family and friends. The memory of her remains a source of inspiration and encouragement to all who knew her.

Her husband, Tim, a company solicitor, is a Trustee of BACUP. There were no children of the marriage.