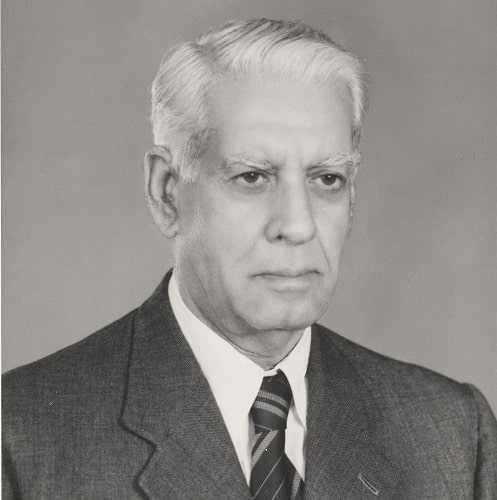 Sohan Lai Bhatia was born at Amritsar, India, the eldest son of Rai Bajadur Hiralal Bhatia, who was an eminent surgeon at Lahore. He was educated at the Central Model School, Lahore, and the Government College (Punjab University), coming to England in 1910 to enter Peterhouse College, Cambridge, where he began his medical studies. He pursued his clinical studies at St Thomas’s Hospital, London, but these were interrupted by the advent of the first world war, when Sohan LaI volunteered as a surgical dresser on the hospital ship Guildford Castle. On graduation in 1917, he returned to India to join the Indian Medical Service.

In May 1918 he was posted to the 105th Maharatta Light Infantry (Egyptian Expeditionary Force), serving in Palestine and Syria. He was awarded the MC in 1918 for personal courage and outstanding service. During his studies at Cambridge, Sohan LaI came into contact with AV Hill, who encouraged him to specialise in physiology, and after the war he was transferred to the civil department of the IMS, being appointed professor of physiology and hygiene at Grant Medical College, Bombay, which was then reckoned to be the best medical college east of Suez. He was appointed dean of the College in 1924, being the first Indian to occupy this post, and in 1937 he became principal of the College and superintendent of the J J Group of hospitals. He held these posts until 1941, serving the College for a total of 21 years. During his administration, he increased the number of hospital beds, strengthened the teaching departments and improved conditions for student welfare. He was an able administrator and an excellent teacher.

At the outbreak of the second world war his proved excellence in administration, and his personal contacts with Indian Universities, made him the obvious choice for the post of deputy director-general of the IMS, which he held from 1941 to 1945. While serving on the Bhor Committee he played a key role in the formation of the All India Institute of Medical Sciences, and was a member of the Scientific Mission which visited the USA, Canada and the United Kingdom. From 1945 to 1947 he served as inspector-general of civil hospitals and prisons in Assam, re-establishing the hospitals destroyed during the war, and helping to convert the medical school at Dibrugarh to a medical college. From 1947 to 1950 he held the post of surgeon-general to the Government of Madras.

Although he retired from the IMS, with the rank of major-general, in 1950, Sohan LaI never retired from work. In the same year, the Government of Hyderabad appointed him inspector-general of medical and health services and secretary of the medical department, where his administrative experience proved invaluable. In 1953 he chaired the pharmaceutical enquiry committee, Government of India, whose detailed report made several important recommendations for the manufacture and control of drugs in India. In 1954, the Karnataka State Government appointed him to report on improvements which could be made to the medical and health services in the State, and in medical education, and from 1962 to 1974 he served as chairman of the newly-established State Board of Medical Research.

Sohan Lal established postgraduate awards and medals in physiology in several universities and medical colleges, both in India and the United Kingdom, including Cambridge and St Thomas’s Hospital. He provided gold medal awards in surgery for postgraduates at the All India Institute of Medical Sciences, New Delhi, in memory of his father. And, as a believer in the interdependence of mind and body, he encouraged students to participate in sport, and awarded shields for excellence.

His charismatic personality combined the best in Eastern and Western cultures. He believed in the synthesis of science and religion for the welfare of mankind, and wrote up his theory in his book Science and the Humanities (Bombay, 1962), with a foreword by AV Hill, FRS. The habit of study, and his concern for humanity, made his retirement productive and he developed a special interest in the history of medicine. He spent several years collecting material for his book A History of Medicine with special reference to the Orient, which was published by the Medical Council of India in 1977. His other publications include Greek Medicine in Asia and other essays (1970) and Medical Science in Ancient India (1972). He was a fine educationist and scientist, contributing much to medicine and serving his country well. His wife, Sharyu, who survived him, was also a doctor.