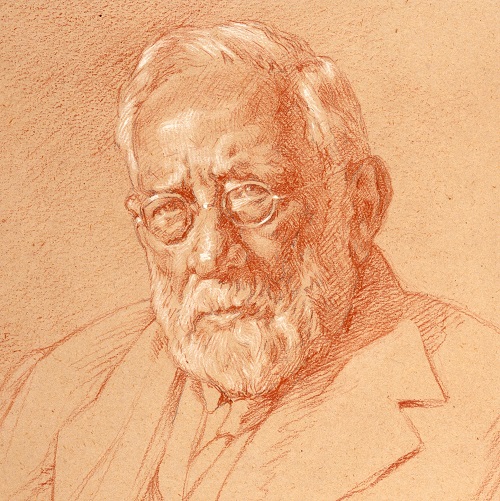 Son of James Barlow, J.P, a cotton manufacturer, and his wife Alice Barnes, Thomas Barlow was born at Edgworth in Lancashire. At Owens College, Manchester, he won many prizes in scientific subjects and graduated as B.Sc. (Lond.) in 1867. He went on to study medicine at University College, London, where he qualified in 1871 and was one of Jenner’s assistants. In 1874 he obtained a registrarship at the Hospital for Sick Children; he became assistant physician in the following year, physician in 1885 and consulting physician in 1899. The first teaching hospital to appoint him assistant physician was Charing Cross in 1876. He relinquished this post after two years, however, to take a similar one at the London Hospital. He again changed his allegiance in 1880 by accepting an invitation to return to University College Hospital as assistant physician. He remained on its active staff until retiring as consulting physician in 1910. From 1884 to 1888 he was also on the staff of the London Fever Hospital. He occupied the Holme chair of clinical medicine at University College from 1895 to 1907.

Barlow’s fame was founded on his contributions to medical research. Current knowledge of meningitis, rickets, rheumatism in children and Raynaud’s disease benefited in turn from his observations, but his greatest achievement was to show, in 1883, that infantile scurvy was identical with adult scurvy, and that rickets was not an essential part of the disease, which, by 1894, when he gave the Bradshaw Lecture on the same subject, had come to be known as "Barlow’s disease". Barlow, a Censor of the Royal College of Physicians, was elected its President in the years 1910 to 1914 and gave the Harveian Oration in 1916. His term as President witnessed the controversy over the National Insurance Act—of which he successfully concealed his own opinion—and the International Medical Congress of 1913, over which he presided. Barlow also enjoyed royal favour. He was Physician to the Household from 1896 to 1910 and Physician-Extraordinary to Queen Victoria, whom he attended in her final illness, to Edward VII, and to George V.

His success as a physician was due both to his vast knowledge of clinical medicine and to the kindliness of heart and genuine sympathy which he showed towards his patients. His short, sturdy figure typified the shrewd Lancashire commonsense of his character. Outside professional matters, he was well informed on botany and geology as well as art and music. One of the principal enthusiasms of his old age was the Royal Medical Benevolent Fund, whose finances he augmented considerably after becoming chairman in 1920. Barlow, who spent part of his retirement near Wendover, had long been Senior Fellow on the College List when he died in his hundredth year. He married in 1880 Ada Helen, daughter of Patrick Dalmahoy of Edinburgh, and had one daughter and two sons, Sir Alan Barlow and Sir Thomas Barlow.