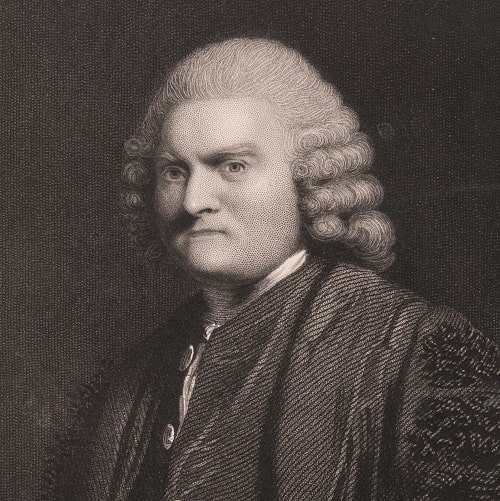 Sir John Pringle, Bart., M.D., was the youngest son of Sir John Pringle, of Stichel house, Roxburghshire, by his wife, a sister of Sir Gilbert Elliot, of Stobs, and was born the 10th April, 1707. He received his rudimentary education at home under a private tutor, and was next sent to the university of St. Andrew’s, where he continued his studies under the direction of his uncle, Dr. Francis Pringle, the professor of Greek in that university, and a physician practising there. He then studied for a year in Edinburgh; at the termination of which, being intended for commerce, he proceeded to Amsterdam. During a casual visit to Leyden he heard a lecture by Boerhaave, which made so strong an impression on his mind that he determined to devote himself to physic. He fixed himself at Leyden, and on the 30th September, 1728, was entered on the physic line there; attended the lectures of Boerhaave, and of the other distinguished persons who then occupied the medical chairs in that celebrated university, and proceeded doctor of medicine 20th July, 1730 (D.M.I. de Marcore Senili. 4to.). At Leyden, he contracted an intimate friendship with van Sweiten, the commentator on Boerhaave, afterwards so celebrated both as professor and practitioner at Vienna. Having completed his medical education by a visit to Paris, Pringle returned to Edinburgh, and commenced the practice of his profession. On the 28th March, 1734, he was appointed by the patrons of the university joint professor of moral philosophy, with the right of succession on the death of his senior, Mr. Scott. In 1742, Dr. Pringle became physician to the earl of Stair, then in command of the British army in Flanders. Thither he proceeded, and on the 24th August, 1742, was appointed to the charge of the military hospital.

Dr. Pringle remained in Flanders during the campaign of 1744, and by his conduct attracted the favourable notice of the duke of Cumberland who, on the 11th March, 1744, gave him a commission, by which he was appointed physician-general to his Majesty’s forces in the Low Countries and other parts beyond the seas; and another creating him physician to the royal hospitals in the same countries. He then resigned his professorship of moral philosophy, the duties of which had been performed by deputy during his absence. He next accompanied the army to Scotland, and remained there until August, 1746; but during the two following years was again with the troops abroad, and did not finally return to England until after the treaty of Aix-la-Chapelle. He then took up his abode in London, and commenced private practice. In 1749 he was appointed physician in ordinary to the duke of Cumberland; in 1761, through his royal highness’s influence, was made physician to the queen’s household; and in 1763, physician in ordinary to the queen. Yet higher honours were in store. He was created a baronet in 1766, and was gazetted physician in ordinary to the king in 1774. He was also physician to the princess dowager of Wales. Sir John Pringle was admitted a Licentiate of the College of Physicians 26th June, 1758; and a Fellow, speciali gratiâ, 25th June, 1763. He was appointed Censor in 1770, but declined to act, and paid the fine enjoined by the bye-laws under such circumstances. Few members of our profession have obtained a wider reputation than did Sir John Pringle.(1) He was a fellow of the College of Physicians of Edinburgh, to which he was admitted 4th February, 1735, and one of the foreign fellows of the Royal Society of Medicine of Paris; a member of the Royal Society of Gottingen, and of the Academy of Sciences at Haarlem, and Madrid.

Of the Royal Society of London, the scene of his highest honours, he was admitted a fellow in 1745. He was chosen one of the council of that Society in 1753, and was elevated to the office of president in 1772. " The period of his election was a fortunate epoch of natural knowledge: a taste for experimental investigation was diffusing itself through every part of the civilised world, and the genius of Pringle found a happy occupation in cherishing this spirit. An universality of knowledge, and a singular liberality of spirit, united to very considerable experience, both of active and studious life, seem to have peculiarly fitted him for his difficult post. Sir Godfrey Copley had originally bequeathed five guineas to be given at each anniversary meeting of the Royal Society, by the determination of the president and council, to the author of the best experimental observations made during the preceding year. This pecuniary offering was at length converted, with greater propriety, into a gold medal; and Pringle ably carved a new road to personal distinction and utility, by the excellent discourses which he took occasion to deliver on the presentation of this annual tribute. Six of these have been edited by Dr. Kippis, and display an intimate acquaintance with the history of philosophy, a noble zeal for its advancement, and a style unaffected, elegant, and perspicuous.

The subject of the fourth discourse was particularly suited to his disposition and pursuits; it accompanied the award of the medal to Captain Cook, and discussed the means employed by that sagacious commander towards preserving the health of seamen. The intimate friendship which subsisted between them renders it probable that Pringle had communicated some valuable suggestions on the subject to his intelligent friend; and no pupil in the schools of Hygiene has ever existed more capable of reducing its rules to practice, since, with a crew of one hundred and eighteen men, Cook performed a voyage of three years and eighteen days, throughout all the climates between 52 N. and 71 S., and only lost one companion of his wanderings. The use of sweet wort, a rigid attention to cleanliness, and the careful preservation of his company from wet and other injuries of weather, formed the chief part of his dietetic code. His example has not been lost upon our navy, which now maintains in the confinement of a ship a degree of health equal to, if not often exceeding, the average observed at home."

The pressure of advancing years, increased by an injury from a fall, induced Sir John Pringle, in 1778, to resign the presidency of the Royal Society, although earnestly solicited to retain it. In 1780 he paid a visit to Edinburgh and purchased a house, to which he retired the following year. Neither his health nor his spirits were so much improved by the change as he had anticipated; the climate proved too sharp for his enfeebled frame, and his contemporaries had disappeared. He therefore returned to London, but before leaving Edinburgh he presented to the College of Physicians of that city ten folio volumes of MS. medical and physical observations. He did not long survive his return, and died the 18th January, 1782, in the seventy-fifth year of his age. He was buried in the church of St. James, Westminster, and a monument by Nollekens was erected to his memory in Westminster abbey. His portrait, by Sir Joshua Reynolds, is in the possession of the Royal Society. Sir John Pringle contributed several papers to the "Philosophical Transactions," and was the author of—
Observations on the Nature and Cure of Hospital or Jayl Fevers. 8vo. Lond. 1750.
Observations on the Diseases of the Army. 8vo. Lond. 1752.
Six Discourses at the Royal Society, on Occasion of the Assignment of the Copley Medal. Edited, with Life, by A. Kippis. 8vo. Lond. 1783.