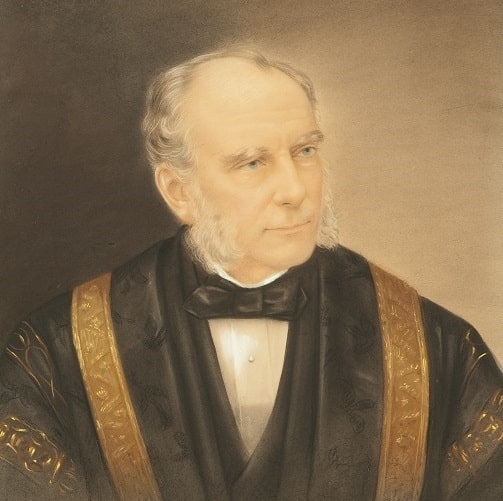 James Bennett was born at Romsey, the eldest son of Rev. James Bennett, D.D., a well-known nonconformist minister. After attending Rotherham College, Yorkshire, as a boy, he began his medical studies as the pupil of a general practitioner in Sheffield. Between 1830 and 1833, he studied at Paris and Edinburgh, graduating at the latter University. The next four years he spent mainly abroad with Lord Beverley and Lord Aberdeen. He returned to England in 1837 to become physician to the Aldersgate Street Dispensary in London and lecturer on medicine at Charing Cross Hospital. In 1843 he was appointed assistant physician, and in 1849 physician, to St. Thomas’s, and in 1848 physician to the newly-established City of London Hospital for Diseases of the Chest.

Although he was a chest physician of ability, it was in the affairs of the Royal College of Physicians that Bennett made his mark. Croonian Lecturer in 1863 and Lumleian Lecturer of 1870, he became a Censor and finally President, holding this office from 1876 until 1881. He owed his position, not to any strong initiative or originality of mind, but to a strength of purpose amounting sometimes to obstinacy, to his practical ability, and his stern religious conviction, which earned the respect of his fellows. He married in 1841 Ellen Selfe, daughter of Rev. Henry Page of Rose Hill, Worcester, by whom he had nine children.