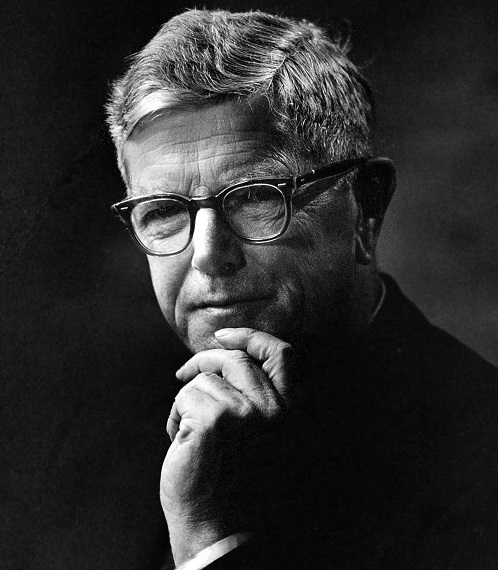 Frank Macfarlane Burnet was born at Traralgon, Victoria, a country town where his father was manager of the bank. He attended the local school, where he was happy, often wandering in the woods collecting beetles and identifying the birds. This awakened his love for biology and he was delighted to read Darwin’s Origin of Species. Darwin remained his hero. Later he boarded at Geelong College and excelled at science. He then entered the medical school at the University of Melbourne, gaining second place in his final year in 1922. During his year as house physician at the Royal Melbourne Hospital he decided to become a neurologist but was posted to the pathology department, and so began a lifelong committal to the bench.

He was slim, of medium height, fine featured, shy and an ardent worker. His spark of genius impressed Charles Kellaway, director of the adjoining Walter and Eliza Hall Institute of Medical Research. Kellaway appointed him to his team, which included Neil Hamilton Fairley [Munk's Roll, Vol.VI,p. 171] and Gordon Cameron [Munk's Roll, Vol.VI.p.80]. In 1926, Kellaway sent Burnet to London to work with C J Martin at the Lister Institute. After gaining his PhD he returned to Melbourne.

Under Kellaway’s guidance he received public acclaim: he solved the mystery of the ‘Bundaberg Tragedy’, when twelve children died following diphtheria immunization - he found virulent staphylococci in the injected fluid.

He returned to London in 1931 and worked for three years under Henry Dale at the National Institute of Medical Research. He developed Goodpasture’s method of culturing a virus on the membrane of a developing chick embryo. He was deeply impressed by that method. By good fortune, in a neighbouring laboratory P P Laidlaw, C Andrewes (q.v.) and Wilson Smith made history: they transmitted the influenza virus to ferrets.

Inspired by his London experiences, Burnet hastened back to Melbourne where there was an outbreak of influenza among the nursing staff of the hospital. He injected sputum into his chick embryos and colonies of influenza virus appeared on the membranes. He was over-joyed - a world first! Now a vaccine could be made. Indeed, it was the first step in his famous researches into the unfathomed depths of virology.

By a series of brilliant experiments, he and his colleagues unravelled the obscurities of G K Hirst’s haemagglutination test for the presence of influenza virus. They discovered that virus possessed a mucolytic enzyme and the substrate was neuraminic acid which coated the red blood cells. They called the enzyme ‘neuraminidase’. They also found that neuraminidase was present in cholera toxin and its mucolytic action contributed to the destruction of bowel epithelium.

During those days Burnet also led his team in studies outside his laboratory. In 1930, 312 cases of poliomyelitis occurred in Victoria. He transmitted the causal virus to monkeys, and was the first to discover there were two specific strains with no cross-immunity. This was of vital importance for John Enders in Boston when he produced the first successful vaccine and was awarded the Nobel Prize. At that time a colleague wrote of Burnet: ‘His enthusiasm and meticulous method of study were most impressive. Slim, handsome and of medium height, his pensive expression, penetrating gaze and apparent shyness, would blossom into a lucid description of his current research’.

In 1936 Burnet discovered that the cause of Q fever, which was attacking abattoir workers, was a rickettsial organism. It was called Rickettsia burneti in his honour.

In 1942 he was elected a Fellow of the Royal Society and treasured the many friendships he made there. He succeeded Kellaway, as director of the Hall Institute and research professor of experimental medicine in the University of Melbourne, in 1944.

In 1949, Burnet and P Lind discovered ‘recombination’. They found that if two different strains of influenza virus were grown together under suitable conditions they formed a new strain with characteristics of both parents. Burnet wrote: ‘It would not be a fantasy to say that in the influenza virus we have a tool - a uniquely suitable tool - with which to break some of the codes that lie at the basis of cellular life’. In 1950 Burnet guided Alick Isaacs in his discovery of interference between ‘inactive’ and ‘active’ strains of influenza virus when they were grown on the chick embryo membrane. Later, Isaacs continued that research in London and, collaborating with J Lindenmann, in 1957 they discovered the famous biological product interferon.

The virus causing an epidemic of severe encephalitis in the River Murray area was discovered in Burnet’s laboratory by E French in 1951 and the epidemiology was unravelled by G Anderson: the virus was harboured by humans in New Guinea, carried south by migrating waterbirds and transmitted by mosquitos to animals and man.

For some time Burnet had experienced an increasing urge to investigate the immunity system. Why did man tolerate his own tissues, yet reject foreign tissues? That urge reached its climax in 1957. He proclaimed to his colleagues that virus research would cease and research into the body's immunity system would begin. He vigorously discussed antibody production and action, and formulated his clonal selection theory: antibodies were directed against invaders such as foreign tissue grafts whereas antibodies directed against the host’s own tissues were eliminated.

He was intrigued by the autoimmune diseases, where that tolerance of the host’s own tissues failed and tissue destroying antibodies appeared, causing a disease such as systemic lupus erythematosus. He visited the hospital to see cases of autoimmune disease and had heated debates with the physicians. His casting into the future was a stimulus and a joy to all. In 1963 he joined with Ian Mackay to write Autoimmune Diseases: Pathogenesis, Chemistry and Therapy, Springfield, Illinois, Thomas, c.1963. It was a pioneer publication.

In his laboratory he studied the ‘New Zealand black’ mice which developed autoimmune disease. He found changes in the thymus gland and postulated that lymphocytes from the gland might be producing damaging antibodies. Under Burnet’s guidance, Gustav Nossal researched with J Lederberg, a Nobel Prize winner visiting from America. In 1958 they discovered a single lymphocyte released only one strain of antibody even when exposed to two strains. Then, led by Burnet, N Warner and A Szenberg first discovered there were two populations of lymphocytes, each with a different function, either ‘graft rejection’ or ‘antibody production to an injected antigen’; later they were called ‘T’ and ‘B’ cells. This sparked off worldwide research.

During those successful years of immunity research Burnet’s personality changed. He emerged from the cloistered existence which had served him so well during his virus research to become more extrovert. He was convincing in his pronouncements on the progress of science and the future of the human race. He took an increasing interest in his fellow men. He maintained his love of the Australian bush by joining the ‘Wallaby Club’ for long walks, to enjoy good company and the birds he knew so well.

HM Queen Elizabeth II awarded him the Order of Merit in 1958, and in the following year he received the highest award of the Royal Society - the Copley Medal - previous recipients being Charles Darwin and Captain James Cook of HMS Endeavour. He later delivered the Croonian lecture to the Royal College of Physicians, entitled ‘The Autoimmune Diseases’; Lord Adrian being in the chair.

Burnet accepted the honours with pride and modesty, retaining a refreshing trace of his early shyness which was matched by his still youthful appearance.

In 1965 he retired as director of the Walter and Eliza Hall Institute and was succeeded by Gustav (later Sir Gustav) Nossal. It was an occasion on which his colleagues showed their admiration: they were deeply grateful for his gifts to mankind, and the inspiration and guidance he had given to so many young scientists. During his retirement Burnet was constantly engaged in writing, lecturing and travelling. He enjoyed staying with Sir Gordon Wolstenholme at Ciba Foundation House in London, with John Enders in America, and with Konrad Lorenz in Austria to see his ‘new light on animal ways’ as told in King Solomon's Ring.

Burnet’s 70th birthday was celebrated in the Great Hall of the Royal Australasian College of Surgeons. His virtues and achievements were extolled by Frank Fenner and by Gustav Nossal who said: ‘No one who loves Australian science will ever forget his example’.

Amidst those happy events came sorrow for Mac Burnet. In 1973 his beloved wife Linda died from leukaemia. Charming, intelligent and amusing, she had been a pillar of strength both at home and during their travels. Later, in 1976, he married Hazel Foletta who, as a librarian, had helped him with his writings.

He wrote several books, including Immunity, ageing and cancer: medical aspects of mutation and selection, San Francisco. Freeman, 1976, in which he stated: ‘Cancer occurs when a key enzyme of the group handling DNA repairs mutates to an exceptionally error-prone form. Advancing age advances the degree of proneness of these enzymes.’ In 1985 he developed cancer with wide spread metastases. He knew his days were numbered but, true to form, he followed his downward course with astonishing interest - almost with glee. He had elected to spend his last days at the home of his son, Ian, at Port Fairy on the south coast of Victoria, the land of his predecessors. After a state funeral in Melbourne, he was buried near Port Fairy: ‘close to where he had studied nature as a child’. His daughter Deborah wrote: ‘It was a perfect Spring day with brilliant blue sea in the distance and skylarks singing overhead. I think Pa would have heartily approved.’ Yes, it was a fine ending to a brilliant career.