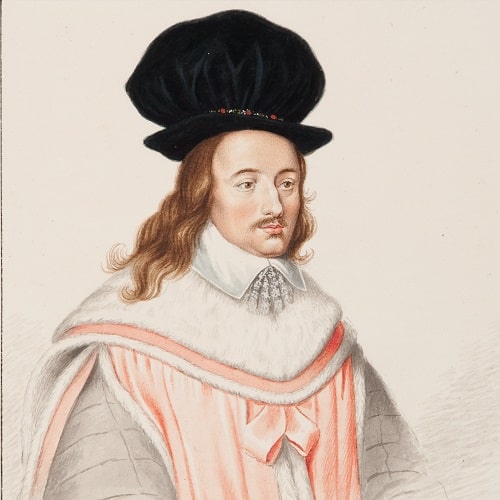 Sir Charles Scarburgh was born in London, and educated at St. Paul's school and at Caius college, Cambridge, where, having taken the first degree in arts (1636), he was chosen a fellow, and proceeded A.M. in 1639. He then took pupils, but devoted the whole of his spare time to mathematics and medicine: the latter he had determined should be the business of his life, the former he regarded as the best preparative thereto.

ln the prosecution of his mathematical studies, he made the acquaintance of Bishop Seth Ward, then of Emmanuel college, whose studies were directed to the same subject. They mutually assisted each other, took Oughtred's CIavis Mathematicus for their guide, and, meeting with some insurmountable difficulties in that work, they determined to make a joint visit to the author, then at his living of Aldbury, in Surrey. Mr. Oughtred received them most kindly, treated them with great politeness, and in a short time fully resolved all their difficulties. The two friends returned to Cambridge complete masters of the work, and were the first to read lectures upon it in the university.

ln the civil wars, Mr. Scarburgh was a sufferer for the royal cause, and was ejected from his fellowship at Caius. He thereupon withdrew to Oxford, entered himself at Merton college, then presided over by the immortal Harvey, obtained the friendship of that great man, and rendered him considerable assistance in the preparation of his work "de Generatione Animalium." On the 23rd June, 1646, he was created doctor of medicine at Oxford, by virtue of letters from the chancellor of the university, wherein it was stated that "he was master of arts of Cambridge of seven years' standing and upwards; that he was spoiled of his library in the beginning of these troubles; and afterwards, for his conscience, deprived of his fellowship at Cambridge." His letters testimonial from Harvey stated that he was well learned in physic, philosophy and mathematics. He was incorporated at Cambridge on his doctor's degree in 1660; and he was one of the original fellows of the Royal Society.

Dr. Scarburgh's reputation was by this time established. He had for many years read the anatomical lectures at Surgeon's hall with great applause, and he was about this period appointed first physician to king Charles II. by whom he was knighted 15th August, 1669. He attended the king in his last illness, and left behind him a full and interesting account of that illness in MS. The MS. is at the Society of Antiquaries, No. 206. Sir Charles was also physician to James II. both before and after his accession to the throne; was physician to the Tower, and to king William III.

The friendship commenced at Oxford with Harvey was continued to the end of his life; and when, on the 28th July, 1656, Harvey presented to the College the title-deeds of his paternal estate in Kent, and resigned his Lumleian lectureship, he transferred that office to Sir Charles Scarburgh. "Prælegendi quoque munus (quod multis annis summo cum honore obierat) in Drem Scarburgh transtulit." In his will Harvey makes affectionate mention of his friend, and leaves him his velvet gown and surgical instruments. "Item, I give my velvet gowne to my lovinge friend Mr Doctor Scarburgh;" - "and to Dr Scarbrough all my little silver instruments of surgerie."

His love for mathematics continued to the last, and he accumulated a library so valuable, as to have been considered deserving of incorporation with the King's library at St. James's. Evelyn writes thus (Diary, 10th March, 1695): "I dined at the Earl of Sunderland's with Lord Spencer. My Lord showed me his library, now again improved by many books bought at the sale of Sir Charles Scarburgh, an eminent physician, which was the very best collection, especially of mathematical books, that was, I believe, in Europe; once designed for the King's library at St. James's; but the Queen dying, who was the great patroness of that design, it was let fall, and the books were miserably dissipated." A catalogue of the library was issued in l695. "Bibliotheca Scarburghiana; a catalogue of the incomparable Library of Sir Charles Scarburgh, M.D., containing a very curious and scarce collection of Greek classics." 8 vo. On the fly leaf of the copy belonging to Heber is the following note: "A noble collection of Greek and mathematics; an immense proportion printed on large paper." R. Heber.

Sir Charles Scarburgh was the author of Syllabus Musculorum, which was often reprinted; of A Treatise upon Trigonometry; A Compendium of Lily's Grammar; and An Elegy upon Mr. Abraham Cowley. His son, Charles Scarborough, D.C.L., Oxon, published in folio in 1705, from his father's MSS. An English translation of Euclid's Elements, with excellent explanatory notes.

A portrait of this distinguished physician exists (or did exist) at Temple Newsome, in the parish of Whitchurch, co. York. And there is another at the Hall of the Barber Surgeons, which has been engraved.