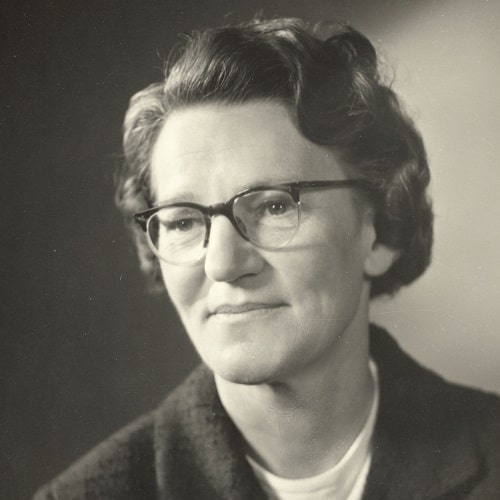 Rosemary Peyton Biggs was one of the outstanding haematologists of her day and was respected worldwide for her research into blood coagulation and haemostasis.

She was born into a comfortable middle class family and was the youngest of four children of Edgar and Ethel Biggs. Her father was a well-known London goldsmith. Her two elder sisters went to public school and then on to Oxford, but their mother was so concerned at the effect that this had on the girls that she decided to protect Rosemary from the detrimental effects of such an education. She tried to bring her up as an Edwardian lady, teaching her to read widely, paint in watercolour and do tapestry. These things Rosemary loved. Going to tennis parties was another requirement. This she hated, along with golf, which was all the rage in her family.

By the time she had reached her teens she realized she wanted to be a doctor but under parental pressure she agreed to pursue the more lady-like subject of botany. Having obtained a BSc in botany from London University she continued her botanical studies in Toronto, where she was awarded a PhD for her work on mycology.

The outbreak of the Second World War made her return to England and gave her the opportunity of studying medicine at the Royal Free Hospital. She successfully argued that a doctor could play a bigger part in the war effort than a botanist. She graduated in 1943 and, following junior appointments in London, she moved in 1944 to the department of pathology at the Radcliffe Infirmary. Here she worked as a graduate assistant with Alastair Robb-Smith and R G Macfarlane [Munk's Roll, Vol.VIII, p.303].

When she first went to Oxford she carried out research into the pathology of 'crush syndrome', many cases of which she had seen during the London blitz, but under the influence of Gwyn Macfarlane she soon turned her attention to the variability encountered in routine haematological tests. Here her grasp of statistical methods, learnt as a botanist, proved invaluable.

Stimulated and encouraged by Macfarlane she carried out studies on fibrinolysis and then moved on to study the blood coagulation mechanism. In 1949 her dissertation on prothrombin gained her an MD from the University of London with honours and a University gold medal.

The rest of her professional life was spent in Oxford. Throughout the 50s and 60s, working with Macfarlane and Ethel Bidwell, she produced a stream of outstanding research papers which laid the foundation of our current understanding of haemophilia but more importantly led to huge improvements in the organizing and provision of care for patients with haemophilia.

In 1953 she published, along with R G Macfarlane, Human blood coagulation and its disorders (Oxford, Blackwell Scientific Publications, 1953). This book was to become a classic. She was strongly of the opinion that laboratory research was of little value unless the knowledge learnt was quickly used to benefit patients.

When Professor Macfarlane retired in 1967 she took over the running of the MRC Blood Coagulation Research Laboratory at the Churchill Hospital and also became director of the newly established Oxford Haemophilia Centre.

She served as editor of The British Journal of Haematology and of Thrombosis and Haemostasis and she was an active member of many national and international bodies.

She was awarded the James F Mitchell Foundation International Award for Heart and Vascular Research in 1971 and the Macfarlane Award of the Haemophillia Society in 1978. The latter award gave her particular pleasure.

Outside the laboratory she campaigned vigorously for better educational facilities and better employment opportunities for men with haemophilia. She felt great frustration when she saw that despite major advances in treatment, the careers of boys with haemophilia were often blighted by the negative attitudes of educationists and employers. She campaigned vigorously with Katharine Dormandy [Munk's Roll, Vol.VII, p.157] of the Royal Free Hospital to change these attitudes.

Rosemary Biggs was a very private person who rarely talked about herself. However I did get some insights into her character on our daily lunchtime walks round the Churchill Hospital. On those walks we discussed many things, usually not to do with work. She loved reading and she read very widely, especially sociology, philosophy and poetry. After her retirement she embarked on several literary courses with the Open University and gained at least one degree in the arts.

Her taste in art encompassed both figurative and abstract painting, as well as ceramics and Chinese porcelain. Tapestry making she loved and she always had one in progress. She finished her last tapestry and had started a new one just a few days before her death. She loved music. Her taste again was broad, but she especially loved Mozart and Shostakovitch

Walking gave her great pleasure and she particularly enjoyed walking on Bredon Hill, which was just outside her front door at Little Comerton.

Gardening was her greatest love and she took much pleasure in the beautiful garden that she and her adopted daughter Caroline made at her home, Well Furlong. Any visit always started with a walk round the garden, the first stop being the green house with the vine. She was proud of her grapes and of the wine she made.

She loved cooking, especially baking and making jam. It was always a pleasure to have tea in the kitchen with Rosemary, where home-made bread and jam were served, watched by three or four stray cats at the kitchen door and several of the more timid ones looking in through the window.

Rosemary's politics were distinctly to the left of centre. This led her to support the underdog and the under-privileged. Although in her youth she hated the tennis parties she loved Wimbledon and watched it closely on television every year. I am reliably informed that on the three occasions when Goran Ivanisovic lost in the finals Rosemary was close to tears.

The last months of her life were very difficult for her but she bore the frustration and the pain with typical stoicism, greatly supported and cared for by her adopted daughter.