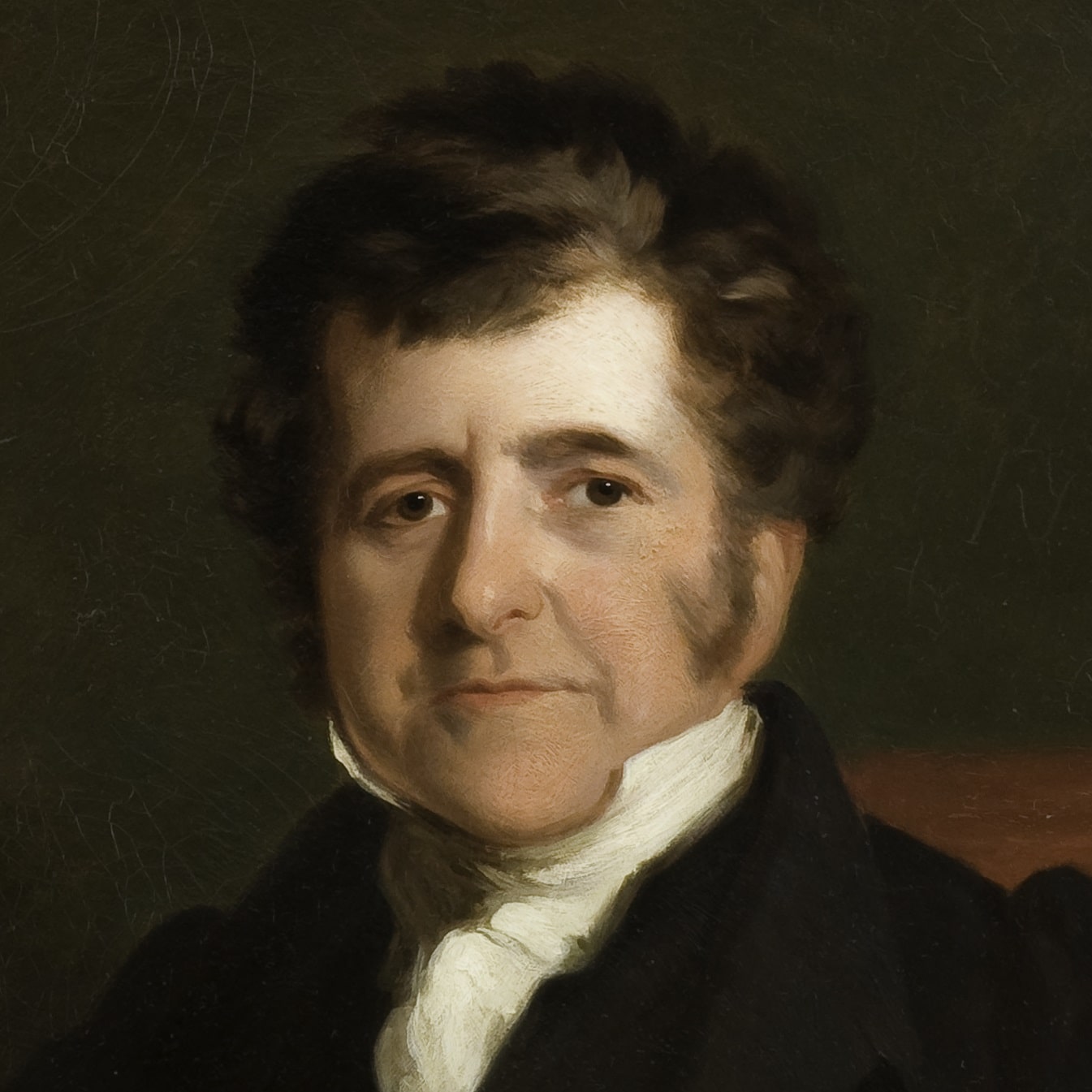 Richard Bright, M.D., was descended from a family of old and respectable standing in Herefordshire. He was the third son of Richard Bright of Ham Green, in the county of Somerset, esq., a merchant and banker of substance and standing in Bristol, which city his eldest brother represented in three successive parliaments. He was born in September, 1789, at Bristol, and educated at a school in the immediate neighbourhood, kept by Dr. Estlin, and subsequently at Exeter, under the private tuition of Dr. Carpenter. In the autumn of 1808 he proceeded to Edinburgh, where he resided in the house of the Rev. Robert Morehead, one of the clergymen of the episcopal chapel in Edinburgh, a man of refined taste and elegant attainments. During the first year he devoted himself exclusively to the lectures of Dugald Stewart on Moral Philosophy and Political Economy; of Playfair on Natural Philosophy, and of Leslie on Mathematics; but in 1809 applied to the study of medicine. In the summer of 1810 he accompanied Sir George Mackenzie and his fellow student the future Sir Henry Holland, on a visit to Iceland. He contributed to Sir George’s published account of that tour the portions connected with botany and natural history.

On his return, he came to London to continue his medical studies at the Borough hospitals, and took up his residence within the walls of ‘Guy’s,’ living in the house of one of the officers of the establishment. After two years thus spent he returned to Edinburgh and graduated doctor of medicine 13th September, 1813 (D.M.I. de Erysipelate Contagioso). Returning to London he became a pupil of Dr. Bateman at the Public dispensary, and continued his studies at Guy’s hospital. In the summer of 1814 Dr. Bright started on a lengthened continental tour. After visiting Holland and Belgium, he proceeded to Berlin, where he passed some months, attending the practice of Horn at the hospital of La Charité, and of Hufeland at the Polyclinique. From Berlin he went to Dresden, and from Dresden to Vienna, where he attended the practice of Hildenbrand, of Rust, and of Beer. In the spring of 1815 Dr. Bright made a tour through Lower Hungary. He arrived at Brussels on his way homewards, about a fortnight after the battle of Waterloo, and found in the hospitals there much matter of professional interest.

Dr. Bright was admitted a Licentiate of the College of Physicians 23rd December, 1816, and shortly afterwards was elected assistant-physician to the London Fever hospital, where, during a severe epidemic, he contracted fever and narrowly escaped with his life. In the autumn of 1818, he again visited the continent. He spent several months in Germany, and passed by the Tyrol into Italy, returning through Switzerland and France. On his return to England in 1820, he established himself in Bloomsbury-square, in the same year was appointed assistant-physician, and in 1824 physician to Guy’s hospital From the first, he took an active part in the business of teaching, as well in the wards as in the lecture-room.

In 1822, he began to lecture at Guy’s on botany and materia medica, and in 1824, on the theory and practice of physic, in connection first with Dr. Cholmeley and afterwards with Dr. Addison. His devotion to the duties of his office, and to pathology in particular, throughout the whole period of his connection with the hospital was most remarkable. During many years he spent at least six hours a-day in that great practical school, carrying his researches constantly and with untiring patience, whenever he could do so, to the ultimate test of the morbid appearances after death. It was there that he laid the foundation for those discoveries in renal disease which immortalised his name.

Dr. Bright’s Reports of Medical Cases, selected with a view to illustrate the Symptoms and Cure of Diseases by a reference to Morbid Anatomy, appeared in two volumes, quarto, 1827—1831. Upon each and all of the varied subjects treated in this work, Dr. Bright showed the most sagacious observation, untiring industry, and wonderful powers of investigating truth, the end and aim of all his work. The appearance of the first volume in 1827 marks, and indeed in itself constitutes, an epoch in the history of medicine. In it are contained the chief facts and inferences on which his great discovery in renal pathology was based.

The importance of albumen in the urine as a symptom of dropsy had been already established by the researches of Dr. Blackall and Dr. Wells. But it was Dr. Bright who connected that symptom with disorganisation of the kidney, elucidated its causes and consequences, and in truth, in so doing, gave to the world a new pathology. "It is curious and instructive to us all," said his friend, Sir Charles Locock, "to note how closely and entirely he worked out his investigations; how absorbed he was solely in making out their true value, without apparently wishing to make a point or a brilliant hit, but quietly and gradually clearing away doubts and difficulties, and ending in axioms which have been universally recognised, because felt to he genuine and true."(1) Great as was the import in Dr. Bright’s opinion of the conditions of kidney he had described, fitly termed after him morbus Brightii, and Bright’s disease, the tendency of more recent research is to extend rather than to limit its significance, and to show that in many instances at least it is to be accepted as evidence of degeneration in the system at large; of which more general degeneration the kidney disease is but a part. In further proof, if that be needed, of Dr. Bright’s unrivalled powers of observation, it may be added that he was one of the first who described acute yellow atrophy of the liver, pigmentation of the brain in miasmatic melanæmia. condensation of the lung in hooping cough, unilateral convulsion without loss of consciousness in local cerebral diseases, and the cardiac murmur in chorea.(2)

Dr. Bright was admitted a Fellow of the College of Physicians, 25th June, 1832; he was Gulstonian lecturer in 1833, Lumleian lecturer in 1837, Censor in 1836 and 1839, and Consiliarius 1838, 1843. In 1837, on the accession of her Majesty to the throne, he was appointed physician extraordinary to the queen. Dr. Bright died at his house in Savile-row on the 16th December, 1858, in the sixty-ninth year of his age, after an illness of only four days’ duration, sinking from profuse hæmorrhage from the stomach and bowels, connected with long-standing disease of the aortic valves. He was buried at Kensal-green.

In the church of St. James’s, Piccadilly, is a simple mural monument, with the following inscription: —
Sacred to the memory of
Richard Bright, M.D., D.C.L.,
Physician Extraordinary to the Queen,
Fellow of the Royal Society and other learned bodies.
He departed this life on the 16th December, 1858,
in the sixty-ninth year of his age.
He contributed to medical science many discoveries
and works of great value;
and died while in the full practice of his profession.
After a life of warm affection,
unsullied purity, and great usefulness.

Dr. Bright "was of a remarkably even temper and cheerful disposition; most considerate towards the failings of others, but severe in the discipline of his own mind. He was sincerely religious both in doctrine and in practice, and of so pure a mind that he never was heard to utter a sentiment or to relate an anecdote that was not fit to be heard by the merest child or the most refined female. He was an affectionate husband and an excellent father, not only taking the most lively interest in the welfare of his children and in their pursuits, but never so happy as when he had them around him. He was perhaps better known abroad throughout the civilized world than any other British physician of modem times, and in his own country was pre-eminently sought for by his professional brethren in cases of difficult diagnosis. His eminent position was fairly, though tardily, won by his thoroughly practical writings and great discoveries; and was sustained by his amiable manners, by his uniformly honourable conduct to his professional brethren, his sound judgment and knowledge of disease, and by the pains which he took in investigating the most minute particulars of every case which was brought before him."(3)

Dr. Bright was twice married; first to Martha, youngest daughter of William Babington, M D., F.R.S., and secondly to the youngest daughter of Benjamin Follett, of Topsham, co. Devon, esq., a sister to Sir William Webb Follett. He left a widow, two daughters, and three sons. The College possesses a portrait and a fine bust of Dr. Bright. The bust was presented by his widow; the portrait was painted at the expense of the College, "in honour of his memory."

Dr. Bright’s writings are numerous and important. Beside his contributions to Sir George Mackenzie’s Travels in Iceland, we owe to him-
Travels from Vienna through Lower Hungary, with some Remarks on the State of Vienna during the Congress in the year 1814. 4to. Edin. 1818.
Reports of Medical Cases, selected with a view to illustrate the Symptoms and Cure of Diseases by a reference to Morbid Anatomy. 2 vols. 4to. Lond. 1827—1831.
Vol. I. Anasarca, Ascites, Dropsical Effusion, Pneumonia, Phthisis, Fever. 1827.
Vol. II (in 2 parts). Diseases of the Brain and Nervous System. 1831.
Address at the Commencement of a Course of Lectures on the Practice of Medicine. 8vo. Lond. 1832.

Dr. Bright was a frequent contributor to the Medico-Chirurgical Transactions and to the Guy’s Hospital Reports. All that he subsequently added, and it is much, in confirmation or completion of his original statements on renal pathology, is contained in the Guy’s Hospital Reports. In the same volumes are a series of papers on Physconia, which have been collected into one volume, under the editorship of Dr. Barlow, and published by the New Sydenham Society as-
Clinical Memoirs on Abdominal Tumours and Intumescence. 8vo. Lond. 1860.

Bright's father, Richard Bright (1754-1840), inherited property and enslaved people in Trelawney, Westmoreland, Clarendon and St Andrews in Jamaica. When slavery was abolished in 1834, compensation was awarded to previous owners of enslaved people, based on the asset lists of their holdings. Bright's eldest brother, Henry Bright (1784-1869), collected £3,293 compensation for an estate in St Elizabeth, Jamaica.