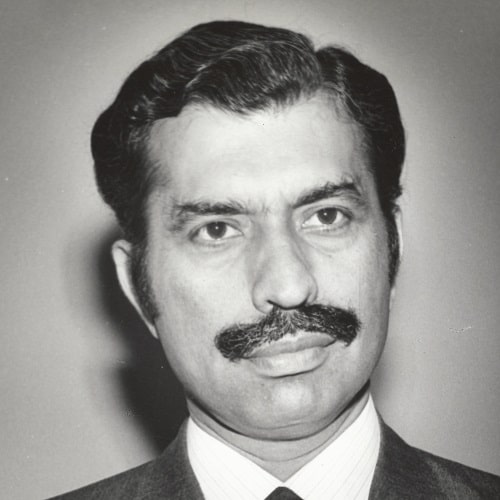 Noshir Hormusji Wadia (known to his friends and family as ‘Prof’ or as ‘NHW’ to his students) was undoubtedly the founding father of Indian neurology. He was born in Surat, the son of Hormusji and Dinbai Wadia. His father was a timber merchant. He qualified in medicine from Bombay’s Grant Medical College and JJ Hospital, and in 1951, after completing an MD in internal medicine, travelled to the UK for further training. In 1952 he attended a three-month course at the National Hospital for Nervous Diseases, Queen Square, where he observed the neurology greats of the time and was immediately hooked and his aspiration to become a neurologist was confirmed.

After obtaining his membership of the Royal College of Physicians in 1952 he was appointed as a resident medical officer at the National Hospital for Nervous Diseases, Maida Vale, where he worked for Sir Russell Brain [Munk’s Roll, Vol.VI, p.60]; the young Wadia’s enthusiasm for the subject, hard work and pleasant personality made such a good impression that the following year he was appointed as a registrar to Sir Russell at the London Hospital.

In 1957, after receiving training in the British method of neurology, Prof would tell us that Robert Frost’s words rung in his ears (‘The woods are lovely dark and deep but I have promises to keep…’) and so he returned to India, where he was immediately appointed as the first ever honorary neurologist to the JJ Hospital and Grant Medical College in Bombay with a mandate to establish and develop the first neurology department in India.

Prof nurtured his fledgling six-bedded neurology unit and when he retired from the JJ Hospital in 1982 it had grown into a 45-bedded neurology department. He had an inquisitive mind and was a keen observer and so when he returned to India he immediately noticed that the prevalence of neurological diseases was different from those in the standard textbooks. His first research was into the neurological complications of manganese poisoning in Indian miners, the high Indian prevalence of craniovertebral anomalies, Wilson’s disease, tuberculosis spinal meningitis, leprosy associated peripheral neuropathy and nutritional disorders of the nervous system, all of which he documented and published. He identified two unique Indian diseases, which were later recognised elsewhere – a new variant of hereditary ataxia with slow eye movements and adult poliomyelitis due to a new virus (enterovirus 70) associated with pandemic acute haemorrhagic conjunctivitis. In his book, Neurological practice – an Indian perspective he wrote: ‘the main task of Indian Neurologists has been rightly to identify and document the prevalence of local diseases and through research build up a neurological nosography pertinent to our country.’ His research methodology was classically clinical and he did not allow the local lack of cutting edge equipment to hold him back. For example, to record slow eye movements in patients with hereditary ataxia he improvised and used a revolving smoked Sherrington drum.

In 1973, whilst still at the JJ Hospital, he set up a neurology department at a private trust hospital, the Jaslok Hospital and Research Centre, also recognised for postgraduate training. At the JJ and the Jaslok hospitals Prof was responsible for training a generation of neurologists and he maintained that his ‘boys and girls’ can be found not just in India but the world over. His skill in the art of clinical neurology and his flair for teaching were legendary. He was a charming man with a quick smile under a bushy moustache and he always had a kind word. His spirit and enthusiasm was infectious and he was hugely cherished and admired by his students and revered by his patients.

Prof had a special place in his heart for British neurology. He was a member of the Association of British Neurologists and had forged deep and lifelong friendships with numerous British neurologists, many of whom regularly visited his unit in Bombay to attend meetings and to teach; and these connections facilitated a steady flow of students in both directions. He was always well turned out and his smart suits, ties and matching socks in a typically English style were notable. He was also deeply involved in world neurology and from the foundation of the World Federation of Neurology served on several of its committees and research groups, finally being elected as vice president. He received numerous national and international awards. Amongst them was the coveted Padma Bhushan, India’s third highest civilian award, which he received in 2012.

Prof would tell us never to take good fortune for granted and as an example would recount an event in his life. In 1961, on his way back to India from a World Federation of Neurology meeting in Buenos Aires, his flight made a stopover in Lisbon, but unfortunately that was on the very day that India invaded Goa to liberate it from Portuguese rule. He was marched off the plane at gun point and spent the next two months as a hostage in a dungeon of the notorious Caxias prison in Lisbon. This sparked worldwide outrage from Amnesty International, the Red Cross, the Papal Nuncio and other governmental organisations, and representations demanding his release were made by numerous eminent neurologists from around the world. Prof was finally released through the personal intervention of Jawaharlal Nehru, India’s prime minister and Prof would tell us that at the time it was rumoured that he was exchanged for a 400-year-old Goan statue of Jesus Christ, which was much coveted by Salazar!

Prof was survived by his wife Piroja, the pioneer of clinical neurophysiology in India, two stepsons and two brothers. His legacy as India’s pioneer neurologist, charismatic teacher, inquisitive investigator and a good man will live on.