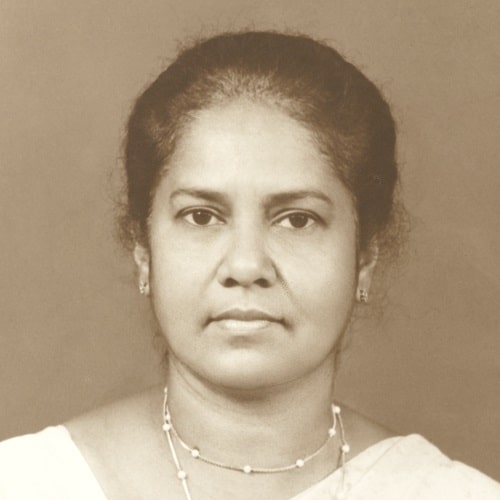 N Soma de Sylva was a consultant physician at the General Hospital, Colombo, Sri Lanka. She was born in Balapitiya, Ceylon, the daughter of Nallahandhi Sudamdas de Silva, a planter, and Walimuni Melinona de Silva, a housewife. After an exceptional school career at Sri Sumangala Girls’ School, she entered the University of Ceylon, graduating in 1961.

She held house posts at the General Hospital, Colombo, and then, having served as a house physician and then a registrar to Kumaradasa Rajasuriya [Munk’s Roll, Vol.VI, p.386], she decided on a career in general medicine. She completed her MD in 1967 and obtained her MRCP in 1971.

She was then appointed to a consultant physician post at Kalutara in the western part of the country. With her kind and caring nature, she made a lasting impression on her patients and staff, and she treated rich and poor alike. Her keen interest in undergraduate teaching made her seek a consultancy post in Kandy, which she obtained in 1974.

In 1974 she also Soma married Ranjan de Sylva, a class mate and a regional epidemiologist in Kandy. They had two sons. Ranjan was quiet, unassuming and amiable, and frequented Kandy Garden Club in the evenings for a vigorous game of tennis. Unlike Soma, who could be serious and grave one moment and charming and effusive the next, Ranjan was always genial, good natured and affable. Their contrasting traits may have made them a companionable pair!

In 1986 she transferred the General Hospital, Colombo, where she served until her retirement at the age of 55. She was a highly respected and greatly admired physician, who was held in high esteem by her students and colleagues alike. Bedside teaching was her forte, as taught to her by her guru and mentor Kumaradasa Rajasuriya. Many doctors have benefited from her training and guidance and are now consultants in Sri Lanka and overseas.

She also earned a reputation for fighting for justice, whether for individuals, junior doctors or the profession as a whole. Her sense of fair play was such that she would not accept the fellowship of the Royal College of Physicians of London before her senior colleague, Mailoo Visuvaratnam [Munk’s Roll, Vol.XII, web]. She was elected by the profession as a council member of the Sri Lanka Medical Council on two consecutive occasions.

On her retirement she gave up medicine and began an intensive study of Buddhist philosophy and comparative religion. She followed classes in various types of meditation and also took part in religious discussions. Although she left medicine, she was always available to help her friends and the deserving to sort out their medical problems or to seek specialists' help when needed.

She was also well known for her hospitality. She was a great lover of nature, gardening being a great hobby of hers. She took immense pride in showing her garden to like-minded friends and discussing the idiosyncrasies of her canine pets, which were part of her extended family!

She died following a brief illness. She leaves behind a life lived to the full, benefiting all who came in contact with her.