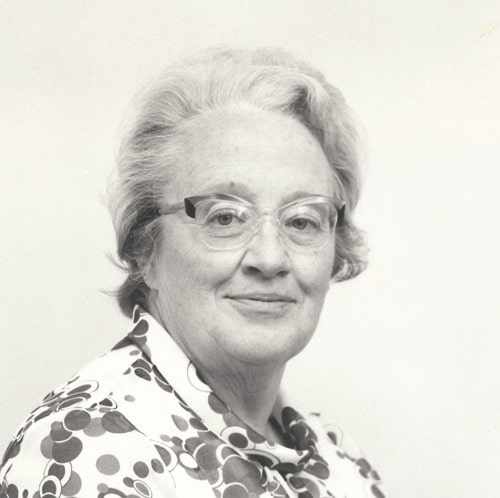 ‘Peggy’ Griffiths (née Williams) was one of a handful of paediatricians who established developmental and community paediatrics as a specialty in its own right. A consultant paediatrician at Birmingham Children’s Hospital and Lea Castle Hospital, Kidderminster, she played a key role in developing services in Manchester and in the West Midlands for children with neurodevelopmental disabilities.

She was educated at Withington Girls School and Manchester University. As a young doctor she worked with founders of Manchester paediatrics, including Catherine Chisholm [Munk’s Roll, Vol.V, p.70] and Sylvia Guthrie at the Duchess of York Children’s Hospital where equal opportunity for women in medicine was fostered at a time of male hegemony.

She went on to work as a research fellow with Wilfrid Gaisford [Munk’s Roll, Vol.VIII, p.173] on neonatal BCG immunization, and did her MD thesis on this topic. She remained involved in the research programme and on advisory committees on BCG in the 1950s.

However it was her work in neurodevelopmental paediatrics which became the main focus of her career. In Manchester she was involved in setting up Rodney House in 1960 where she ran a cerebral palsy clinic which attracted children from throughout the North West region. After her move to the Midlands in the mid-1960s, she held a combined post at Birmingham Children’s Hospital and Lea Castle Hospital (a regional centre for mental handicap). From these two bases she developed a clinical and teaching service in child development and neurodisability reaching across the West Midlands. She had a particular interest in cerebral palsy and was influential in bringing Bobath physiotherapy into the West Midlands. She published many papers and wrote three books on the care of disabled children.

Always formidably energetic, she worked for two years after her official retirement at Wordsley Hospital in Stourbridge, helping to establish a consultant community paediatric service and child development centre for Dudley Health Authority.

After her second retirement she continued to be active. Together with her husband, John, she was a member of the Church in the fullest sense. From her home and parish base in Bredon, and through her membership of the Worcester Diocesan Board for Social Responsibility (amongst many committees), she worked tirelessly on issues to do with children, families and parenting. Mindful of the problems of transitional care, she helped establish residential homes in the diocese for young adults with disabilities.

Through her work in the Worcester diocese, she was a steady and effectiveadvocate for the ordination of women; the achievement of this goal during her lifetime was a great joy for her.

Peggy’s life was a skilfully crafted integration of family, professional and church commitment. She died peacefully after a three month illness.