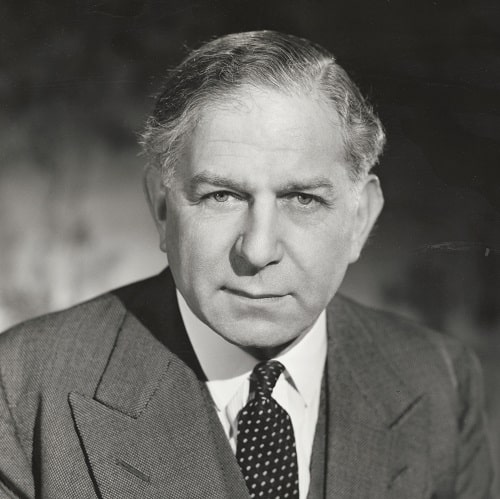 Solly Zuckerman rose to be and remained, under governments of various political persuasions, one of the most influential figures concerned with major national decisions; he was adviser to the Establishment, as well as being a scientist and a doctor.

Born in Cape Town, South Africa, Solly was by early training an anatomist. When he came to London in the 1920s he was persuaded by Elliot Smith, later Sir Grafton [Munk's Roll, Vol.IV, p.545], to study medicine at University College London but clinical work had no appeal for him and after qualifying he took up a post as research anatomist to the Zoological Society. In one capacity or another, he remained faithful to the Zoo all his life; earning a controversial reputation with his work on the social life of apes.

At Oxford he became immersed in the study of hormones and reproductive rhythms, and the idea of developing an oral contraceptive was thought possible. For all these experiments he acquired a collection of apes, which greatly enlivened the environs of the University museum. Sadly, with the advent of war it became necessary to establish the amount of blast damage the mammalian frame could withstand and some of his unfortunate apes played their part.

During the second world war, Zuckerman’s academic life took second place and he became scientific adviser to Combined Operations HQ. Throughout the war he was able to make many of his ideas effective in practice - but not all. If he had had his way the terrible bombing campaign of German cities would have been replaced by precise attacks on communications, thus paralysing supplies to enemy armies.

After the war, in 1960, he became chief scientific adviser to the Secretary of State for Defence and in 1964, under the Wilson administration, he was appointed chief scientific adviser to the government. At this time, owing to the force of his personality and intellect, he had a powerful influence on military and strategic policies. Remarkably, for a scientist, he was able to gain the trust of the Services - and, mercifully for us all, he had a temperamental horror of nuclear weapons.

Although he retired from public service in the 1970s he continued to work in the Cabinet Office and to direct operations behind the scenes. It was at this time that he wrote his three volumes of autobiography: From apes to warlords, London, Hamish Hamilton, 1978, Monkeys, men and missiles, 1988, and Six men out of the ordinary, 1992. One of his last articles, which appeared in Nature in 1993, was a strong plea for a comprehensive nuclear test ban. Just before he died he was about to start another book, designed to tell everybody what was wrong with the world - which, according to one member of his family, was what he had been doing all his life.

A list of his writings and many honours shows the contributions he made to the national life of Britain. He was particuarly proud of his Order of Merit and of being made a Knight Commander or the Bath in 1964. He climbed to the top in everything he did: he joined the Zoo Council in 1953, became Secretary in 1955, succeeded HRH Prince Philip as President - and held that office until 1984. He established the laboratories which developed into the Institute of Zoology.

Solly was generally considered a complicated man, often dismissive of those less intellectually gifted. He was, however, very simple and unopinionated when it came to medicine - he used to telephone the writer to ask who he should consult about various complaints and meekly accepted the advice he was given.

Perhaps the most vital part of his life was his happy marriage. Joan Isaacs was the elder daughter of the second Marquess of Reading but she did not only provide an entrée into aristocratic society; far more importantly, she gave him a crucial element of domestic stability. They had a son, Paul, an agronomist with the World Bank in the United States and now a merchant banker in England, and a daughter, Stella, who died in 1992 leaving two children.

* Elected under the special bye-law which provides for the election to the fellowship of "Persons holding a medical qualification, but not Members of the College, who have distinguished themselves in the practice of medicine, or in the pursuit of Medical or General Science or Literature.."