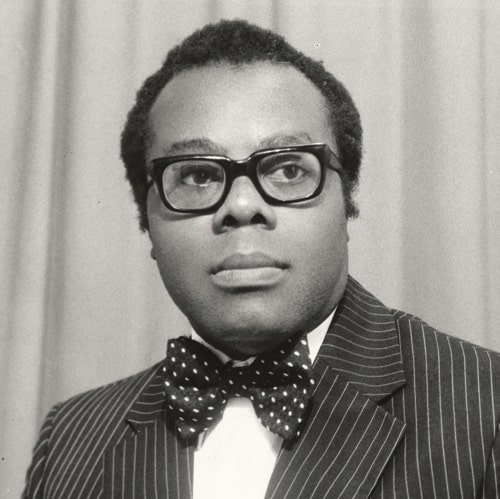 Joseph Orleans Mends Pobee was professor of medicine at the University of Ghana, Accra. Born in the town of Cape Coast in southern Ghana, his father John Mends Samuel Pobee, was a schoolmaster. Educated at Adisadel College in Cape Coast, he studied medicine at the University of London and the London Hospital. Qualifying in 1961, he did house jobs at St Mary’s Hospital in Plaistow for a year. Returning to Ghana, he worked as a government medical officer at the Korle Bu Teaching Hospital in Accra until the summer of 1964, when he returned to the UK.

He did further house jobs at Tindal Hospital in Aylesbury for a few months, followed by a time at Stoke Mandeville Hospital from early 1965 until January 1966, and then he spent two years back at the London. In 1968 he returned to Ghana and the Korle Bu Hospital as senior registrar and lecturer in medicine at the University of Ghana Medical School. He was appointed consultant physician in 1972.

He was deeply concerned about the rise of hypertension in Ghana and was co-principal investigator of the World Health Organisation Hypertension and Cardiovascular Disease Project in Accra. He wrote several papers on aspects of public health in his country and published three books on the subject of cardiovascular problems. The year before he died, when he was 77, he launched a book Heart of the matter: community profile of cardiovascular diseases of a sub-Saharan African country: the Ghana paradigm: the Mamprobi Cardiovascular Health Project 1975-1983 (Accra, 2006?) and called for increased public awareness of those activities which produce high blood pressure in urban populations, particularly as he was against using costly medications. He also continued to campaign vigorously about the threats of preventable tropical diseases and, in 2007, was quoted in an editorial as saying that it was appalling that 50 years after independence, Ghana ranked second in the world in terms of guinea worm infection and deaths due to malaria, particularly in children.

A keen footballer in his youth, he was captain of the London hospitals team. He also enjoyed tennis, reading novels and foreign travel.

In 1960 he married Lucy Mary Née Mensah, a fellow graduate in medicine from London University, whose father, Ebenezer Benjamin Mensah, was a bookkeeper. They had three sons and one daughter. When he died, he was survived by his wife and family.