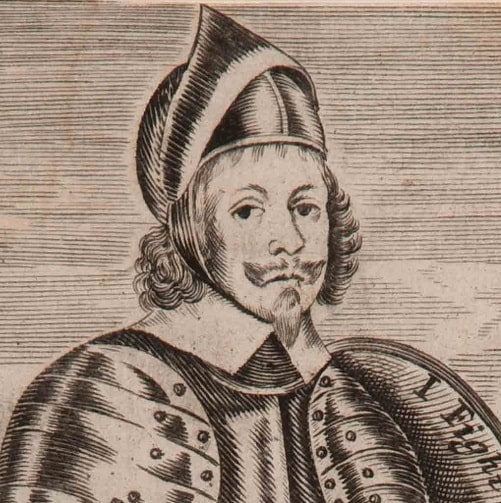 John Bastwick, MD, was born at Writtle, in Essex, in the year 1593. He was entered at Emmanuel college, Cambridge, in 1614, but continued there for a short time only. Leaving Cambridge without any degree, he travelled for several years upon the continent, and divided his time between the schools and the camp. On the 14th January, 1614, he was inscribed on the philosophy line at Leyden, and he returned there some years later and entered himself on the physic line. On the 13th January, 1622, he proceeded doctor of medicine at Padua. Returning to England, he married a daughter of Dr Leonard Poe, a Fellow of the College, and physician to the king's household. On the 15th February, 1624-5, he was admitted an Extra-Licentiate of our College, and settled at Colchester, where he practised physic for a time. It is probable that he soon left Colchester and removed to London, for on the 4th May, 1627, after the usual examinations before the Censors, he was admitted a Licentiate.

Apparently not satisfied with his progress in the profession, and being a man of strong zeal and warm imagination, he applied himself to writing, more particularly against Popery. About the year 1633, he printed in Holland his Elenchus Religionis Papisticæ, together with Flagellum Pontificis et Episcoporum Latialium. The bishops of the Church of England conceiving themselves calumniated, our author was brought before the High Commission Court, and on the 12th February, 1633, was fined 1,000l, sentenced to be excommunicated, debarred the practice of physic, his books to be burnt, to pay the costs of suit, and to remain in prison until he made his recantation. The College proceeded to carry out one part of the sentence, and revoked his licence to practice, as we see from the following memorandum:- “1634, February 18. It was proposed by Mr President to the Censors whether Dr Bastwick having been lately censured for misdemeanour and insolence in the High Commission Court, and thereupon committed to prison, should not be debarred practice. The Censors taking due notice of his misdemeanour and evil carriage in the Court have revoked his licence, and have declared him not to be permitted to practice.”

Dr Bastwick was imprisoned in the Gatehouse, but his violent temper would not permit him to be quiet. During his confinement he wrote Apologeticus ad Præsules Anglicanos, &c., or an apology for himself, addressed to the bishops; and another entitled Letany wherein he grossly reflected on the bishops, taxed them with an inclination to Popery, and exclaimed against the severity and injustice of the High Commission's proceedings against him. This led to further proceedings, and on the 11th March, 1637, an information was exhibited against Bastwick, Henry Burton, BD, and William Prynne, a barrister-at-law, in the Star Chamber, by the Attorney-General, for writing and publishing seditious, schismatical, and libellous books against the hierarchy and the Church. They were served with subpœnas returnable immediately, but refused to appear unless they were allowed access to counsel. This being granted, they prepared their answers; but that of Dr Bastwick, was of such a character, that even his own counsel refused to sign it. One passage in particular, quoted by Whitelocke, was so objectionable, that the doctor's own friends begged of him to expunge it. This he obstinately refused to do, and after much haggling with the court, and even a threat to expose the infamous proceedings against him, through the whole length and breadth of the Christian world, sentence was about to be passed. Bastwick hereupon made some remarks, and in his peroration, alluding to the punishment which he was aware was designed for him, expressed himself in the following extraordinary terms:- “I shall presume to say unto your honours, as Paul spoke unto the Centurion. What said he? ‘Would you whip a Roman?’ So, my good lords, let me say unto your honours, What I will you cut off a true and loyal subject's ears for doing his duty to his king and country? Will you cut off a scholar's ears, will you cut off a doctor of physic's ears, able to cure lords, peers, kings, and emperors? Will you cut off a Christian's ears, will you make curs of Christians, my lords? Will you cut off a catholic, apostolic, a Roman's ears? Then, brethren and fathers, what an age do we live in, that we must thus be exposed to the merciless fury of every malignant spirit!” This appeal had no effect in mitigating the sentence. Bastwick, Burton, and Prynne were censured as scandalous, seditious, and infamous persons, and condemned in a fine of 500l each, to stand in the pillory, and there to lose their ears, and to perpetual imprisonment in three remote places of the kingdom. They were set in the pillories in Palace-yard, Westminster, 30th June, 1637, when Bastwick made a very odd speech, which is given at length by Fuller. Soon after he was sent to Launceston castle, Cornwall, Prynne to Caernarvon, and Burton to Lancaster castle. But even at these distances they found means to maintain a correspondence, and to have some of their more virulent writings dispersed in London, whereupon the court saw fit to remove them to a greater distance. Bastwick was sent to St Mary castle, in the Scilly Isles, Prynne to Jersey, and Burton to Guernsey, where they were strictly interdicted from communication with anyone. The punishment was generally considered exorbitant, and altogether disproportionate to their offence.

On the meeting of Parliament, in 1640, a petition was presented to the House of Commons, wherein it was requested that the justice and rigour of their sentence might be reviewed and considered, and their persons brought from those remote and desolate places they were confined in, to London, that so they might be able to facilitate or attend to their own business. Upon this, the House ordered that they should be removed from the “foreign” prisons they were in, to the places to which they were first committed, and for that purpose warrants were signed by the Speaker to the governors and captains of the several castles, to bring them in safe custody to London. Bastwick landed at Dover, 4th December, had his charges born all the way to London, was loaded with presents, and received everywhere by vast numbers of people, with wonderful acclamations of joy. As he approached Southwark he was met by great crowds of Londoners with boughs and flowers, and conducted by them to his lodgings in the City. The 21st February following, the House of Commons declared that the several proceedings against him were illegal, unjust, and against the liberty of the subject; that the sentence passed upon him be rescinded, his fine remitted, and he himself restored to his profession; and that for reparation for his losses, he ought to have 5,000l out of the estates of the archbishop of Canterbury, the High Commissioners, and those lords who had voted against him in the Star Chamber. The College of Physicians, on the 18th December, 1640, rein¬stated him in his position as a Licentiate,(1) but the ensuing confusion of the times prevented the payment of the 5,000l. We find, however, that in 1644 his wife had an allowance ordered for her own and her husband's maintenance, and on the 24th December, 1648, there was a debate about ordinances for him to have reparation for the illegal sentence against him in the Star Chamber. What became of him after that is not known. It is generally thought that he returned to Colchester.(2) He died apparently in London. Smith(3) records his burial on the 6th October, 1654.