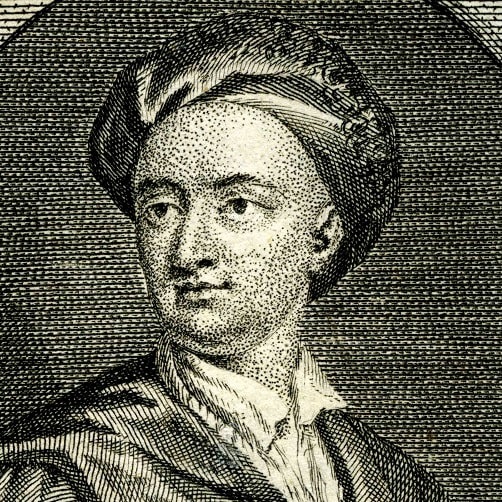 John Arbuthnot, M.D., was descended from the noble family of his name and was the son of a clergyman of the episcopal church of Scotland. He was born at Arbuthnot, near Montrose, and was educated at the university of Aberdeen, where he took the degree of doctor of medicine. The Revolution deprived the father of his church preferment; and though he was possessed of a small paternal estate, yet necessity compelled the son to seek his fortune abroad. Dr. Arbuthnot therefore quitted Scotland, and went to reside at Doncaster, where, however, he met with so little success that he speedily left, and coming to London found an abode in the house of Mr. William Pate, a " learned " woollen draper. He commenced his career in town by teaching mathematics, but the appearance in 1695 of Dr. Woodward’s "Essay towards a Natural History of the Earth," containing as Arbuthnot thought, an account of the deluge wholly inconsistent with truth, induced him to publish a reply.

This work not only excited much curiosity, but had the further, and, as regarded his interests, the more important effect of attracting attention towards himself, and of giving him no small degree of literary fame. This soon afterwards received a considerable and deserved increase by his "Essay on the Usefulness of Mathematical Learning." 8vo. 1700. About this time Arbuthnot commenced practice in the metropolis, and as his contemporaries testify, with every qualification to ensure success. His extensive learning and facetious and agreeable conversation, introduced him by degrees to practice, and he soon became eminent in the profession. Being accidentally at Epsom when prince George of Denmark was suddenly taken ill, he was called to his assistance. The doctor’s advice was successful, and the prince recovering employed him ever afterwards as his physician. In 1720, upon the indisposition of Dr. Hannes, Arbuthnot was appointed physician in ordinary to queen Anne, and soon obtained her Majesty’s high favour. Swift calls him " the Queen’s favourite physician," and " the Queen’s favourite." As her Majesty’s physician, Arbuthnot was instrumental in recovering the queen from a dangerous illness, and to this incident Gay, in the prologue to the " Shepherd’s Week," thus alludes :—

A skilful leech (so God him speed)
They say had wrought this blessed deed.
This leech Arbuthnot was yclept,
Who many a night not once had slept;
But watch’d our gracious Sovereign still:
For who could rest while she was ill?
Oh! May’st thou henceforth sweetly sleep,
Sheer swains ! Oh sheer your softest sheep
To swell his couch; for well I ween,
He saved the realm, who saved the Queen.
Quoth I, please God, I’ll high with glee
To Court, this Arbuthnot to see.

Arbuthnot was created doctor of medicine at Cambridge 16th April, 1705. On the 12th December, 1707, he was elected an honorary fellow of the College of Physicians of Edinburgh, and as physician in ordinary to the queen, was admitted a Fellow of the Royal College of Physicians of London, 27th April, 1710. He was Censor in 1723; delivered the Harveian Oration in 1727; and was named an Elect in place of Dr. Slare, deceased, 5th October, 1727. On the 12th November, 1713, he was appointed by the queen physician to Chelsea hospital.

Dr. Arbuthnot’s gentle manners, extensive learning, and excellent talents introduced him to the intimate acquaintance and warm friendship of the most celebrated literary characters of his time—to Pope, Swift, Gay, and Parnell, whom he met as a member of the Scriblerus club. It was not long before Arbuthnot added a new lustre to that constellation of wits by the brightness of his own. With Pope and Swift his relations were of the most intimate kind. Arbuthnot possessed all the wit of the dean without his virulence and indelicacy; and a considerable portion of the genius of Pope, without his querulous discontent. In 1714 he engaged with them in a design to write a satire on the abuses of human learning in every branch, which was to have been executed in the manner of Cervantes, under the history of feigned adventures. They had observed that these abuses still kept their ground against all that the gravest and ablest authors could say to discredit them. They concluded, therefore, that the force of ridicule was wanting to quicken their disgrace, which was here in its place, when the abuses had already been detected by sober reasoning, and truth was in no danger of suffering by the premature use of so powerful an instrument.

But a stop was put to this project by the queen’s death, when they had only drawn out an imperfect essay towards it, under the title of " The First Book of the Memoirs of Martinus Scriblerus." Dr. Warburton tells us that "Gulliver’s Travels," " The Treatise of the Profound," the " Literary Criticism on Virgil," and the " Memoirs of a Parish Clerk," are only so many detached parts and fragments of this work. The same writer does not hesitate to declare that polite letters never lost more than by the defeat of this scheme, in which each of this illustrious triumvirate would have found exercise for his own peculiar talent, beside constant employment for that which they all had in common. Arbuthnot was skilled in everything that related to science; Pope was master of the fine arts ; and Swift excelled in knowledge of the world : wit they had all in equal measure, and so abundant a degree, that no age, perhaps, ever produced three men on whom nature had more bountifully bestowed it, or in whom art had brought it to higher perfection. The queen’s death, and the disasters which fell upon his friends on that occasion, deeply affected Arbuthnot’s spirits, and to divert his melancholy he paid a visit to his brother at Paris. His stay there however, was but short; he returned to London, and having on the death of the queen lost his apartments in St. James’s palace, took a house in Dover-street. He continued to practise his profession with good reputation, and diverted his leisure hours in writing papers of wit and humour. In 1732 he contributed towards detecting and punishing the frauds and abuses which had been carried on under the name of the " Charitable Corporation."

In 1734, having then for some years suffered severely from asthma, Arbuthnot retired to Hampstead, in hopes of finding some relief from his symptoms, but he died at his house in Cork-street, 27th February, 1735, and was buried at St. James’s, Piccadilly. He left one son and one daughter; the former, George, was one of the executors to Pope’s will, and held the place of first secretary in the Remembrance office. A fine portrait of Dr. Arbuthnot, presumed to be by Jervas, formerly in the possession of Dr. Turton, bishop of Ely, was purchased for the College at the sale of the bishop’s effects, in 1864, and is on the staircase. An engraving of Arbuthnot, now exceedingly scarce, is mentioned by Mr. Wadd as being in the collection of Sir William Musgrave, bart.

Few men have been more esteemed during life than Arbuthnot, none have left behind them a higher character for learning, or for the most elevated social, moral, and religious virtues. The language of eulogy has been well nigh exhausted upon him, and this by some of the wisest and the best of men. He was, in Dr. Johnson’s opinion, the first among the eminent writers in queen Anne’s reign, and the great lexicographer describes him as " a man of great comprehension : skilful in his profession, versed in the sciences, acquainted with ancient literature, and able to animate his mass of knowledge by a bright and active imagination—a scholar with great brilliance of wit—a wit, who in the crowd of life retained and discovered a noble ardour of religious zeal." " Although," wrote lord Orrery, " he was justly celebrated for wit and learning, there was an excellence in his character more amiable than all his other qualifications, I mean the excellence of his heart. He has shown himself equal to any of his contemporaries in humour and vivacity; and he was superior to most men in acts of humanity and benevolence. His very sarcasms are the satirical strokes of good nature ; they are like slaps in the face given in jest, the effects of which may raise blushes, but no blackness will appear after the blow. He laughs as jovially as an attendant upon Bacchus, but continues as sober and considerate as a disciple of Socrates. He is seldom serious, except in his attacks on vice, and then his spirit rises with a manly strength and a noble indignation. No man exceeded him in the moral duties of life, a merit still more to his honour, as the ambitious powers of wit and genius are seldom submissive enough to confine themselves within the limitations of morality." Swift said of him "that he was a man who could do everything but walk and Dugald Stewart testifies to Arbuthnot’s ability in a department of which he was peculiarly qualified to judge. " Let me add," says he, " that in the list of philosophical reformers, the authors of ‘ Martinus Scriblerus ’ ought not to be overlooked. Their happy ridicule of the scholastic logic and metaphysics is universally known ; but few are aware of the acuteness and sagacity displayed in their allusions to some of the most vulnerable passages in Locke’s Essay. In this part of the work it is commonly understood that Arbuthnot had the principal share." Lastly Thackeray characterises him as " one of the wisest, wittiest, most accomplished, gentlest of mankind."

Dr. Arbuthnot was the author of —
On the Laws of Chance, or a Method of Calculation of the Hazards of Game plainly demonstrated. 8vo. Lond. 1692.
An Examination of Dr. Woodward’s Account of the Deluge, &c., with a comparison between Steno’s philosophy and the Doctor’s, in the case of marine bodies dug up out of the earth. 8vo. Lond. 1695.
Tables of Ancient Coins, Weights, and Measures. 4to. Lond. 1727.
An Essay on the Nature of Aliments and the Choice of them, with practical rules of diet in the various constitutions of the human body. 8vo. Lond. 1732.
An Essay on the Effects of Air on Human Bodies. 8vo. Lond.
His Miscellaneous Works, with an Account of his Life, appeared in 2 vols., 12mo. Lond. 1770. (1)