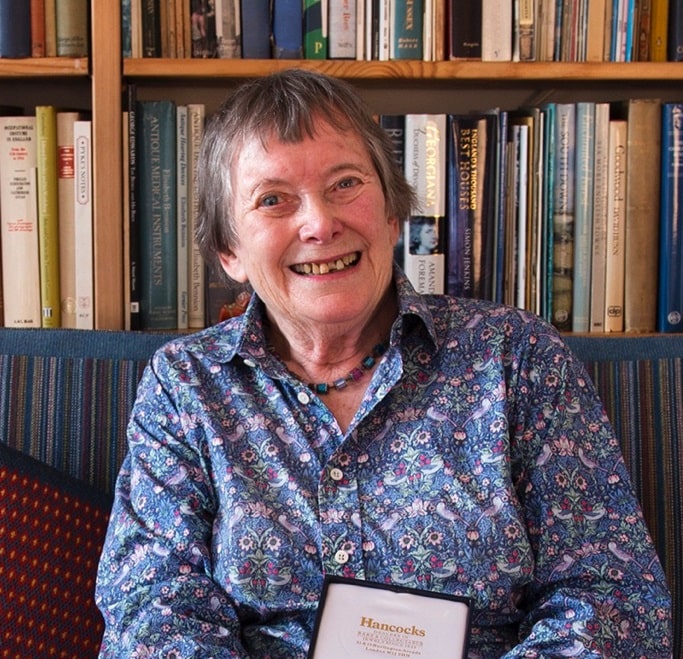 Jean Symons was a generous friend and benefactor of the Royal College of Physicians who, with her husband, Cecil Symons [Munk’s Roll, lent their eponymous collection of largely Georgian medical artefacts to the College in 1996. With the assistance of Arts Council England’s Cultural Gifts Scheme, Jean eventually bequeathed the Symons Collection to the RCP shortly before her death at the age of 90.

Born Jean Layton, she was the daughter of a stockbroker father, James Layton, and a journalist mother, Elize Layton née Gilbert. Growing up in Hampstead, London she remembered meeting successful women from the worlds of arts and politics at the family home. At the co-educational boarding school, Bedales, she developed an unshakeable belief in sexual equality. The school, described as a ‘bohemian idyll with bite’, was renowned for its eccentricity, liberal ethos and relaxed attitude. Although she disliked the daily cold baths and sport, she emerged as a typical alumna: feisty, individual, articulate and nonconformist.

Her senior school days coincided with the Second World War. Saddened by the loss of life and ruin involved, she felt she had some mission in life to fulfil. Jean discovered her mission in the architecture section of the library, where she conceived a desire to help rebuild Britain after the war. The idea of going into construction itself horrified her teachers. Instead, the school encouraged her to pursue architecture as her career, and apply to study at the Architectural Association (AA).

Jean started at the AA in the summer of 1945, a few weeks before the end of the war. She recalled that the first lecture she had was ‘how to sharpen a pencil’, followed by a task to produce a measured drawing of the fireplace in the front member’s room.

In October 1949, instead of starting her fifth and final year, she decided she needed to take time out for practical experience of construction. She managed to secure work on the most important site in London at the time – the first modernist building constructed in Britain after the war – the Royal Festival Hall. During the 15 months she was there as a technical assistant, Jean saw the building nearly completed. She described it as the best job she ever had, giving her the opportunity to see nearly every building trade in operation. Her recollections and iconic photographs (taken with her mother’s Rolleiflex) were presented as part of her finals, and 50 years later published in a booklet Concert Hall notebook: a record of fifteen months on site (AA files. Part 40; 1999, 3-16). In it she recalls anecdotes from the Royal Festival Hall opening ceremony, including being stuck in the lift with VIPs including the Mayor of London, the director general of the Festival and the chairman of the Festival Council, while the ceremony was taking place. They were eventually released, but only to see guests leaving the auditorium after the dedication was over.

After graduating in 1951, Jean developed tuberculosis and was hospitalised for the winter, later convalescing in Switzerland. The young senior registrar, Cecil Symons, who had treated her, drove his Austin A30 to visit her in a Swiss sanatorium. In August 1953 they married, and spent the next two years in New York, where Cecil was a Fulbright scholar at Cornell University. Jean worked providing drawings for the university’s publications.

Subsequently she had a distinguished career combining involvement in architecture, art and the health services. As an architect, she was involved in promoting awareness of the needs of disabled people, and was responsible for producing a number of influential reports on improving access for the disabled. She worked at the AA from 1968 to 1971 as assistant director of the Centre for Advanced Studies in Environment, lecturing and publishing research on the design of healthcare buildings and the needs of disabled people. From 2004 to 2005 she was president of the Franco-British Union of Architects.

Jean Symons was a loyal friend and supporter of the Royal College of Physicians. She succeeded Lady Hoffenberg as chair of the social committee, and served for many years on the art committee (which later became the library, archive and museum advisory committee). Her professional background was particularly valuable in relation to matters affecting the College’s building. She was presented with the Royal College of Physicians’ president’s medal in 2014.

However, her most significant contribution was in connection with the unique Symons Collection of historical medical items acquired over many years. Collecting these objects was a hobby pursued by Cecil and Jean, exploring antique markets throughout England and France, as well as antique and junk shops in America and Australia.

In 1986, a year before his death, Cecil indicated that he would like the Royal College of Physicians to house the collection, however there was no suitable site. When the new extension was being designed, the College’s architect, Sir Denys Lasdun [Munk’s Roll, Vol.XII, web] designed an exhibition space specifically to house the Symons Collection in the Treasures Room. Until it came to the RCP in 1996, it had not been seen in its entirety.

It was Jean’s responsibility, with professional advice, to decide how the objects were to be housed. She continued to work on the collection, assisting RCP curators with its care and documentation, and undertaking research. She contributed to its detailed cataloguing and the published illustrated visitors guide.

The collection of 450 medical and self-care objects assumed increasing importance as a visitor attraction after the RCP was recognised as a nationally accredited museum. It was gifted to the RCP museum in the 500th anniversary year and, with the assistance of Arts Council England, allocated under the Cultural Gifts Scheme. It includes implements used for general medical practice and domestic medicine in the UK from the late 17th to the end of the 20th century. It is a unique learning resource, with five categories: self-care, infant care and feeding, feeding vessels, diagnosis and treatment.

At the formal ceremony transferring the collection to the RCP in October 2018, Jean made a brief speech: ‘I just wanted to say that it has given me great pleasure that this has actually happened. I am very grateful and I know that Cecil would have been because he and I had discussed this, and it was the one thing when he was ill that he was really adamant about. The collection wouldn’t have fitted in my flat. We both of us loved the [Royal] College of Physicians. It made me an honorary fellow, and gave me the president’s medal, so I’ve done very well. But that’s not the point. I did discuss it with the family. I didn’t just march off and give everything away. As someone in the artistic and semi-medical world, I think it’s great that we’ve managed to achieve this and that it is permanent. I didn’t want it to be other than that. So thank you all.’

Following her generous bequest, the name Symons will be permanently associated with the Royal College of Physicians, and the unique collection will be an enduring source of pleasure and interest.

Jean Symons had no children. She was survived by her niece Clare and nephews Stephen, David, Mark, Rupert, Jasper, Ted and Robert.

Related pages
Symons collection
Keeping up appearances: Self-care in the Symons collection
Browse Indexes Return to Results
We use cookies on this website. By using this site, you agree that we may store and access cookies on your device. Find out more.