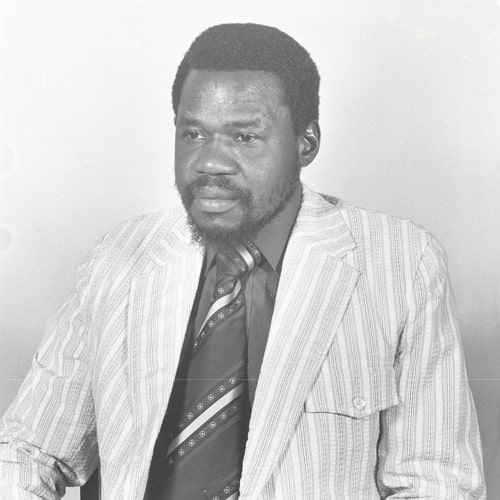 Huxley Knox-Macaulay was professor and head of the department of haematology, Sultan Qaboos University, Oman. A Sierra Leonean, he was born in colonial Freetown. His father, Hugh Farrell Knox-Macaulay, and mother were both head teachers and he grew up in an atmosphere where education was highly valued, not only for itself, but, because of lack of opportunities in the country at the time, it was absolutely vital for a worthwhile and successful career. Huxley decided at an early age that he would be a doctor and he pursued this aim with great determination. He was educated in Freetown at the Sierra Leone Grammar School and at Fourah Bay College, where he excelled in British science ‘A’ levels, which had just been introduced there.

He gained a place at Cambridge University to study for a degree in natural sciences and, being awarded a colonial government grant to study medicine, in 1955 he flew to the UK. This was an enormous step for a young man who had led a sheltered life within a close and happy family, and who had never travelled out of Sierra Leone. However, on his arrival at Fitzwilliam College, he was warmly welcomed and given every help and support. He was able to tackle his studies, mature and make friends who would last a lifetime. He was eternally grateful to the college and university, for when he left for the London Hospital and his clinical training, he was well placed to deal with the demands of his course and the varied experiences of living in a huge city.

After qualifying he studied for the diploma in tropical medicine and hygiene; this he knew would be invaluable in practice in Sierra Leone. After success in that and the examinations for the memberships of the Royal Colleges of Physicians of Edinburgh and London, he returned home as a senior registrar at Connaught Hospital, Freetown, where he saw many patients suffering from sickle cell disease. He realised that specialist knowledge was needed and with government support travelled to Boston, USA, to take up a two-year Harvard research fellowship in haematology at the Massachusetts General Hospital. These were professionally exciting and rewarding years, but politically turbulent; Martin Luther King and Robert Kennedy were assassinated during that time.

On leaving the United States, Huxley joined the department of medical genetics, Liverpool University, where the emphasis was on the study of the genetics of the haemoglobinopathies, particularly thalassaemia. It was headed by David Weatherall, who encouraged him to undertake a research project, which ultimately he was able to present for the MD degree. Huxley always maintained that his time spent there in the company of so many brilliant fellow professionals, enjoying the cut and thrust of academic argument and participating in valuable research, was one of the highlights of his career.

In 1972 he returned to Freetown, now as a consultant in haematology and also general medicine. He used to remark wryly that you needed to be a ‘Jack of all trades’ in a developing country. He worked very long hours, packed with clinical work, teaching and, as far as limited resources allowed, research. Plans to establish a medical school in Sierra Leone delighted him and with his training and experience in academic medicine, he was sent to international workshops relevant to the setting up of a medical school. Years on, when to his great disappointment plans for the medical school had been dropped, an offer came from Ahmadu Bello University, Zaria, Nigeria to join the haematology department there as a reader. Then followed six exciting years in an academic department (during which he was promoted to professor), caring for patients with haematological diseases, teaching medical students and postgraduates, and being involved in research relevant to West Africa. Sadly, financial crises in both Sierra Leone and Nigeria forced him to leave Nigeria (he had three sons in education and elderly parents to support) for a professorship in haematology at King Faisal University, Dammam, Saudi Arabia.

In 1991 Huxley joined the haematology department of Sultan Qaboos University, Oman. He took over as head of department there in 1994 when the then head, Joe White, retired. He was in his element, surrounded by a company of extremely skilled and dedicated doctors and medical laboratory scientists. He took great satisfaction from his clinical, teaching and research work and from managing effectively the needs of the various arms (the laboratories, the thalassaemia unit, the bone marrow transplant unit and the blood bank) of his very large department.

He was held in great affection and high esteem by colleagues and students wherever he worked, and was always ready to help them further their careers, and was in touch with many until not long before he died. He was known for his clinical acumen and his empathy and deep concern for his patients. He had no patience with sloppy work and unpunctuality; students were only late for a lecture once!

Huxley was devastated by the brutal rebel war and Ebola epidemic in Sierra Leone (he lost friends in both episodes); these catastrophes and later ill health prevented him from returning. He retired in 2001 to his beloved home in a village in Suffolk, delighted at last to have unlimited time to spend with his wife and sons and their families. He especially enjoyed holidays in the UK and meeting up with old friends from all over the world. He had a very keen interest in and had wide knowledge of national and international affairs, loved talking sport with his sons and was never happier than when his beloved Liverpool FC won!

Those who knew him will never forget his joie de vivre, his energy, warmth and humanity. He loved medicine, was an inspired teacher and meticulous researcher, but, above all, he was a supremely skilful and compassionate physician.