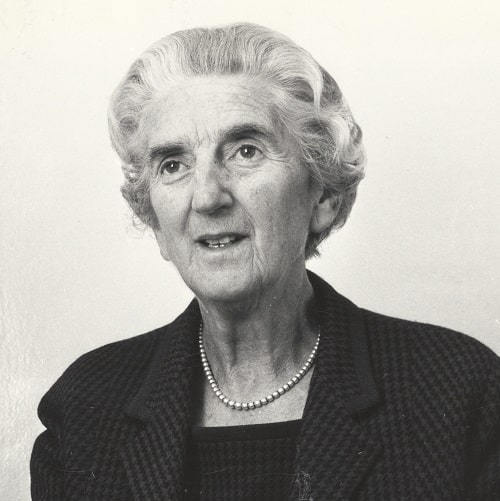 Born in Manchester, where her father, Ogilvie Duthie, was director of education for Salford, Georgiana Duthie was educated at Manchester High School for Girls, Manchester University and King’s College Hospital, London. After house appointments, which included the distinction of being the first woman house surgeon at the Manchester Royal Infirmary, she proceeded to a demonstratorship in anatomy under Professor Stopford.

She was awarded the MD with distinction in 1923, and became the first Dickinson travelling scholar, University of Manchester, selecting the Pasteur Institute in Paris as the centre for her overseas study. It was whilst working in Paris that she met her future husband, Kenneth Bonser, whom she married in December 1927.

On her return from Paris, she was appointed demonstrator in pathology at the University of Leeds under Matthew Stewart, and in 1927 became research fellow and lecturer in the newly established department of cancer research. She was promoted reader in 1950. Her initial research was concerned with the possible role of genetic factors in the formation of tumours, particularly tumours of the breast in mice. This experimental study was combined with a clinical follow-up of the sibs of a cohort of patients treated for cancer of the breast.

Her second major research interest was stimulated by a request to make an epidemiological study of cancer of the bladder in men employed at the ICI dye works, Huddersfield. This study was pursued with the help of chemists, particularly DB Clayson and JW Jull, and with the surgical skill of LN Pyrah, who assisted with the animal experimental work. They made an exhaustive study on the effects of beta-naphthylamine and associated aromatic chemicals with carcinogenic properties.

With the outbreak of World War II and the virtual closure of the department of cancer research, she was appointed morbid anatomist to Pontefract General Hospital in 1942, and in 1948 transferred to St James’s Hospital, Leeds. The latter appointment she continued part-time until her retirement.

Even after retirement she continued, with the co-operation of her clinical colleagues, to run a clinic for the study of the effects of hormones in the treatment and control of cancer of the breast and tumours of the testicle. Her researches led to her being in great demand nationally and internationally, and she visited many countries — Holland, Italy, India, Israel, Egypt, Turkey, Greece and Japan - to participate in symposia and to lecture.

Georgiana Bonser was deeply concerned that women medical graduates should play an important role in professional matters. She was the first woman chairman of the Leeds Division of the British Medical Association, and president of the Women’s Medical Federation (1959-1960). She and her husband kept open house for women medical undergraduates at Leeds, and she was always available to discuss with them problems arising during their course and to counsel them concerning their postgraduate career.

She did much to encourage medical women to continue in practice, and was able to find employment for a number of distinguished women graduates in the cancer department to the mutual benefit of both. Despite a full and active professional life she found time to study art and languages, and was able to participate in her husband’s archeological activities. Many are the miles they drove and tramped together in the north of England searching for the drovers’ roads in preparation for a book by her husband.