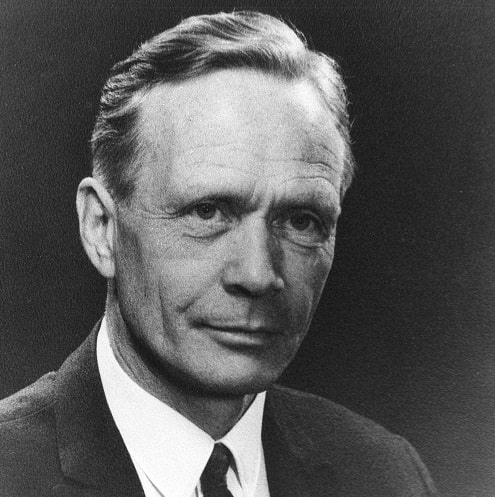 George Fowler Adams was a consultant physician in the geriatric department at Belfast City Hospital. He was born in Aberford, Leeds, the fourth of seven children of Henry Adams, a banker, and Dorothea Jane Adams née Whitehouse, the daughter of the director of a firm of calico printers. His first cousin, Alfred Robert Davies Adams [Munk’s Roll, Vol.IX, p.1], also became a fellow of the RCP. Adams was educated at Larne Grammar School and then studied medicine at Queen’s University Belfast, graduating in 1938. Whilst at Queen’s he represented the university at hockey.

He was a house surgeon and physician, and then a medical registrar, at the Royal Victoria Hospital from 1938 to 1939. Between 1939 and 1945 he joined the Ulster division of the Royal Naval Volunteer Reserve, and served as a surgeon lieutenant commander on board the MV Empire MacKendrick, a merchant aircraft carrier.

In 1949 Adams was appointed as a consultant physician in the department of geriatrics at Belfast City Hospital, where he was responsible for 300 elderly patients, living in overcrowded conditions in a former workhouse. He gradually replaced a passive approach to care with a more active regime, influenced by Warren’s ideas, including diagnosing treatable conditions, mobilising patients and closing beds. He persuaded the authorities to renovate the wards, creating the first purpose-built geriatric unit in the UK, designed for the rehabilitation of the elderly sick.

From 1959 Adams was on the advisory council of the National Corporation for the Care of Old People. He was a member of the council of the British Geriatrics Society, chairman of the executive committee from 1965 to 1967, and the second president (from 1973 to 1975).

At an international level, Adams wrote influential reports on geriatric services in Malta and the Isle of Wight. He was a visiting professor at the University of Manitoba, Winnipeg, where he helped establish teaching in geriatrics.

His chief research interest was stroke. In 1974 he published Cerebrovascular disability and the ageing brain (Edinburgh, London, Churchill Livingstone, 1974), co-written with Louis Hurwitz.

In 1946 he married Dorothea Mary Graham Thomson née Glendinning. He retired to Oxfordshire, where he enjoyed painting, gardening and golf. He cared devotedly for Mary when she developed Alzheimer’s disease until her death in 2005. He was survived by their son and two daughters, by four grandchildren and three great grandchildren. A daughter and two grandchildren followed him into medicine.