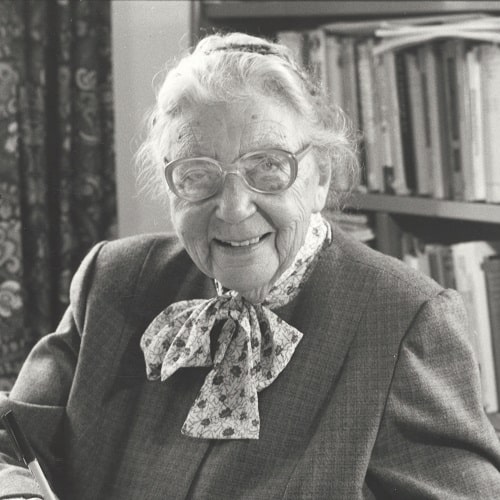 During the latter years of her life, Elsie Widdowson was the most highly honoured woman scientist in Britain, having been appointed as a Companion of Honour, part of a select group of individuals chosen for their outstanding achievement in the arts, science, politics or religion. She is best known now for her work in nutrition, but as she pointed out when I was preparing her biography: ‘Nutrition as a subject did not exist when I started. I have been a chemist, biochemist, plant physiologist, medical researcher and a physiologist.’

She was born in Wallington, Surrey, the daughter of Thomas Henry Widdowson, the owner of a stationery business, and Rose née Elphick. Elsie and her younger sister, Eva Crane, who became a world authority on bees, attended Sydenham County School, where they were encouraged to study sciences. Elsie gained her first degree in chemistry at Imperial College London in 1928.

The turning point in her life came when, at the end of her PhD analysing apples for different carbohydrates, she decided to go to King’s College Hospital to learn about large-scale cooking before starting a dietetics course. ‘I didn't really want to be a dietitian but jobs in research were hard to come by for beginners in the early 1930s.’ A trip to the kitchens brought her into contact with Robert McCance [Munk’s Roll, Vol.IX, p.327], who was analysing plant foods for carbohydrate to plan diabetic diets. In an inauspicious start, she had the cheek to tell him that he was using the wrong methods to determine the sugar content of apples! But no matter, this led to a scientific partnership that was to last 60 years. It helped shape wartime rationing and the British loaf, paved the way for later work on the damage poor childhood nutrition does to adult health, and provided the core for almost every nutritional database in use in the world today. Their book The chemical composition of foods (London, 1940 [Medical Research Council Special Report Series, no.235]) become so universal on its publication that their names passed into the title, linking them forever with the field they had made their own. The sixth edition of McCance and Widdowson's the composition of foods (Cambridge, Royal Society of Chemistry, 2002) was dedicated to Elsie Widdowson.

Armed with these comprehensive food tables, Elsie realised she was in a strong position to calculate the intakes of individual adults and her results, published in 1936, highlighted the large variation in the intake of energy and nutrients between one individual and another of the same sex and age. Later she confirmed this finding on 1,000 children between the age of one and 18. What she then identified as 'nutritional individuality' has now become the basis for detailed investigations in functional genomics.

Elsie Widdowson shared McCance’s enthusiasm for self experimentation, which started with their investigations into the way the body handled the economy (absorption and excretion) of minerals. They tried to persuade the body to excrete iron by injecting quite large quantities intravenously into themselves. She thought it was a pity to go to all that trouble of balanced experiments just for iron, so they had injections of several other minerals at the same time. All went well until ‘that dreadful Saturday afternoon (in 1938) when we had injected some strontium lactate into each other just before lunch to find out how we would excrete it. After about 40 minutes, we both began to have the most dreadful pyrogen reactions. We lay rolling about on that floor in misery.’ Fortunately for science, they were found.

When war was declared, McCance and Widdowson, who by then were working in Cambridge, decided to do research designed directly to help the war effort by establishing how far home-produced food could meet dietary needs. They drew up a scheme based on a weekly ration of just one egg, 1 lb of meat or fish, 6 oz of fruit, 5 oz of sugar, 4 oz of cheese and 4 oz of fat. Brown bread and vegetables, including potatoes, were unrationed and a quarter of a pint of milk was allowed daily. But could anyone exist on that? To show they could, McCance, Widdowson and several colleagues followed the diet to the letter for three months. They existed largely on bread, cabbage and potatoes, a combination that left them permanently full and strong. But would these experimental rations maintain fitness when the body was tested by much more severe conditions? They would find out. Immediately after Christmas 1939, they set out for the Lake District. They hiked energetically across the fells for 10 days with little to eat but bread. Their longest day in that fortnight was the one where they covered 36 miles with 7,000 feet of climbing, doing it at an average speed of 3.2 miles an hour, including stops. It was a truly pioneering experiment, fastidiously recorded and confronting big questions in the practical, do-it-yourself way that was to typify their best work.

Throughout the war, more bread experiments followed, to see whether the more nutritious brown loaves being forced on a wartime population that preferred white interfered with calcium absorption. The results proved clear cut: brown bread did reduce calcium absorption. As a result, every British loaf to this day is fortified with calcium carbonate. I accompanied Elsie when she received her honorary doctorate at Salford University. ‘This is the lady who, single-handedly, won the war’, the citation started.

McCance retired in 1966, but Elsie Widdowson continued to work for another 30 years, emerging at last from his shadow and, to the delight of her friends, achieving full public recognition in her own right. Innumerable honours and medals followed.

Elsie was a wonderful friend and mentor to me and to countless others. Her thatched cottage was a haven of tranquillity, replete with several pet cats, an extensive apple orchard and a vegetable garden – the latter providing practical nourishment for her many visitors who would always be greeted as if they were the most important person in the world.

She loved helping and encouraging young people, and worked tirelessly to promote the acceptance and encouragement of women in science. What advice would Elsie Widdowson give to a young scientist? ‘If your results don't make physiological sense, think and think again! You may have made a mistake (in which case own up to it) or you may have made a discovery. Above all, treasure your exceptions. You will learn more from them than all the rest of your data.’ For her 90th birthday celebrations, I arranged for seven women scientists to talk about Elsie’s contributions and to update the topics. She was overjoyed by this plan!

A lasting memorial to Elsie in Cambridge is the Elsie Widdowson laboratory, which houses MRC Human Nutrition Research. Many areas of research which she initiated are continuing there.