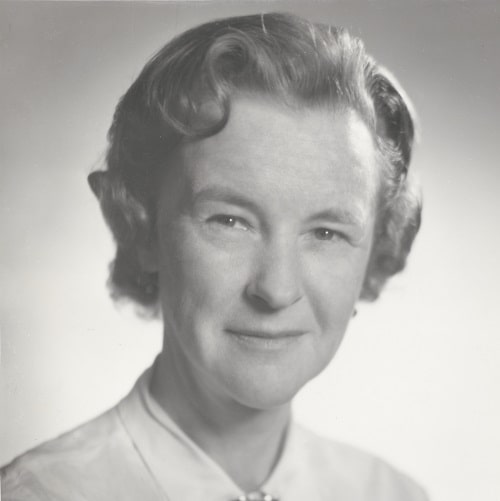 Dame Josephine Barnes ranked among the leading obstetricians and gynaecologists of her generation. Outstanding clinical credentials and drive took her to a top teaching hospital appointment, against the grain of male selection, in the 1950s. A combination of expertise, glamour and fine advocacy of better women’s reproductive health care soon led to national celebrity, while on the international stage she became a renowned contributor to gynaecological academies and conferences. In 1979 she became the 139th, and first woman, president of the British Medical Association. Membership of three national committees of inquiry further added to her stature. Her fine teaching of clinical students at Charing Cross Hospital Medical School, London, was as meticulous as her surgery and the basis of influential textbooks. It is said that she operated with the incisiveness of Beecham beginning a Schubert symphony.

Josephine Barnes had a warm pride in her Yorkshire ancestry. In industriousness, she identified closely with an impressive line of Taylor forebears from which her mother emanated. Her great grandfather, John Francis Taylor, had been a captain of Victorian commerce in York, a founding director of a bank and insurance company, and pioneering chairman of York’s gas and electricity companies. To this family, her mother, Alice Mary née Ibbotson, one of the earliest women accorded fellowship of the Royal College of Organists, added musical distinction.

Brought up in Exeter, Scarborough and Oxford, the first of five children, Josephine Barnes attended schools along the path of her father’s, the Reverend Walter W Barnes’, Methodist ministry. Within the exceptional, self-directed learning ambience of Oxford High School for Girls in the 1920s, she took up science, decided on a career in medicine and rejected her family’s long-treasured Methodism stretching back to Wesley. The hockey skills that were to bring her three Oxford blues also began to develop.

As a medical student at Oxford she read natural sciences, before transferring to University College Hospital (UCH) Medical School, London, for clinical training. The beginnings of her surgical career were in the Oxford anatomy department and the tuition of dissection demonstrator Alice Carleton, which propelled her to the primary fellowship of the Royal College of Surgeons at 22. First class honours in physiology at Oxford and a Goldschmid scholarship for clinical studies added to this early distinction.

Fastidious commitment distinguished her medical school career at UCH. Intent on becoming a first-rate clinician and aware of the gender bias then operating against women in medicine, she strove to outclass male contemporaries. But it was not all work and no play: she still managed to read two novels a week, play hockey for a London University team and sing with the London Philharmonic Choir, occasionally under the direction of Sir Thomas Beecham and once under the German musician and composer, Wilhelm Furtwängler.

Josephine Barnes qualified in 1937, with UCH medals and prizes, and keenly focused on a career in obstetrics and gynaecology, a disciple of “the finest tutor” of her training, Francis ‘F J’ Browne, the principal architect of modern hospitalised maternity care. She intended following Browne’s footsteps in advancing antenatal care and safety of childbirth.

The first steps were the trickiest. She ran into male prejudice at UCH in trying to secure the house officer appointments needed on the hospital career ladder. Her first application for a medical house job fell flat, and she needed to divert to the King Edward VII Hospital, Windsor, for surgical experience. Eventually, at UCH she was taken on to the firm of physicians Andrew Morland [Munk’s Roll, Vol.V, p.294] and John Hawksley [Munk’s Roll, Vol.IX, p.229], and, as a result of Morland’s teaching, became interested in tuberculosis, leading to her 1941 Oxford DM research on TB and pregnancy. Finally, in the months leading up to the Second World War, she fulfilled her ambition to gain a house job in the obstetrics unit of the UCH and qualified MRCP.

She qualified FRCS in 1939 and, advised by the BMA, abandoned thoughts of military service to serve on ‘the home front’, filling in for hospital doctors who had been called up. She spent six months as a house surgeon at the Samaritan Hospital for Women, Marylebone, then six months as a resident medical officer at nearby Queen Charlotte’s Maternity Hospital, maintaining high quality maternity care amidst the worst horrors of the London Blitz.

She filled a vacancy in the Nuffield obstetrics and gynaecology department at Oxford’s Radcliffe Hospital in 1941, working as first assistant to Chassar Moir, the revered discoverer of ergometrine. In addition to surgical lists and teaching Oxford’s first intake of clinical students, she took charge of the emergency maternity annexe set up at Ruskin College for women evacuated from the industrial towns of the south coast. In this Oxford year she qualified as a member of the Royal College of Obstetricians and Gynaecologists.

Securing the first assistant’s post at F J Browne’s professorial unit took her back to UCH at the beginning of 1942, where, with the staff depleted by military service, she also took took up registrar duties. Her career had begun gaining momentum of a kind possible only in wartime and, swept off her feet by junior UCH house officer Brian Warren, she added marriage to her CV in 1942, before his departure on Army service.

She was to combine marriage, motherhood, senior hospital appointments and research with renowned efficiency. In 1942 she began a 500-case study of the credentials of pethidine as an obstetrics analgesic. Soon after becoming a mother, late in 1943, she embarked on a parallel study investigating and eventually contradicting the view that pregnancy increased women’s long-term risks of hypertension. She also inaugurated a UCH study of postnatal diuresis.

The years 1945 to 1947 were pivotal and career advancing. She slimmed down her commitments at UCH to take on locum consultant duties at the Elizabeth Garrett Anderson Hospital, Marylebone, and appointments as visiting gynaecological surgeon at the Marie Curie Hospital, Hampstead, and Hospital for Women, Soho Square. In addition, she set up in private practice in Wimpole Street and began serving on national committees of the Family Planning Association and National Birthday Trust Fund, also as volunteer obstetrician to the Annie McCall Maternity Home charity in Stockwell. She also began forging links with obstetricians and gynaecologists on the Continent, with contributions to conferences in France, Belgium and Spain, and membership of the Société Française de Gynécologie in 1946, the first of many international academic bonds.

Her appointment as obstetrics and gynaecology consultant on the staff of the Elizabeth Garrett Anderson Hospital in 1947 coincided with the retirement from UCH of her greatest mentor, F J Browne, and the arrival of C W C Nixon as professor, with whom she had a less satisfactory association. Nixon sacking her in 1953, to make way for a prestigious research associate, Cicely Williams [Munk’s Roll, Vol.IX, p.584] of kwashiorkor fame, was a massive blow. This injustice Barnes, now a fellow of the Royal College of Obstetricians and Gynaecologists and mother of three, brilliantly transcended in becoming the first female consultant at London’s Charing Cross Hospital in 1954, “while the Nixon-Williams association yielded little”.

With this teaching hospital appointment, Josephine Barnes joined the front-rank of obstetrics and gynaecology specialists and began a tour de force quarter century of colossal clinical distinction and eminent advocacy of better women’s reproductive welfare. In 23 years at Charing Cross she never had an operating death. She was a meticulous operator, “spilling little blood, needing little use of diathermy”. And throughout these years she continued on the staff of the Elizabeth Garrett Anderson Hospital, which she would save from closure in the1970s, and as visiting surgeon at the Marie Curie Hospital, with additional lists at UCH, where she operated on private patients. The publicity her illustrious career attracted and the keen judgement she wielded made her a leading ambassador of family planning and she was an invaluable supporter of David Steel’s Abortion Bill of 1967. She had seen too many victims of back street abortionists not to want legislative change, but, after successfully campaigning with the Royal College of Obstetricians and Gynaecologists for termination to be within the first 24 weeks of pregnancy, would later regard this as six weeks too long. Her memoirs talk of massive discomfort in undertaking abortion at any stage.

In the 1960s, she served on the Royal Commission on Medical Education (1965 to 1968), became an FRCP (a qualification denied her during the presidency of Lord Russell Brain [Munk’s Roll, Vol.VI, p.60) and began long service on the boards of the Royal Free Hospital, the Medical Women’s Federation and Medical Defence Union, in addition to chairing the medical committees of the Marie Curie and Elizabeth Garrett Anderson hospitals, and examining for the universities of Oxford, London and Belfast, the Royal College of Obstetricians and Gynaecologists and Conjoint Board of Royal Medical Colleges. Examining took her to Africa, Australia and the Caribbean.

International travels, advising and lecturing, took her to more than 20 countries in the course of her long career, “in the interests of better women’s medical welfare”, while in Britain she built an incomparable record of commitment to sexual health charities and agencies in this field, including the Family Planning Association, Women’s National Cancer Control Campaign, and the National Associations of Family Planning Doctors, Family Planning Nurses, and Chartered Physiotherapists in Obstetrics and Gynaecology, over which she presided for 20 years.

Before compulsory retirement from the NHS in 1977, when she felt at her peak and still managing 60 hour weeks, she served on the Lane Committee on the Working of the Abortion Act (from 1971 to 1973), had the honour of becoming a DBE and vice president of the Royal College of Obstetricians and Gynaecologists in 1974, and only missed being elected president in the following year by one vote - “a moment of rare dejection”. But the decade would close on a high note, when she became the first women president of the BMA, with membership of the Warnock Committee on In Vitro Fertilisation and Human Embryology following in its wake (1982 from 1984).

She continued in private practice until 1995, although delegating surgery from 1987, “a colossal wrench after a career spanning about 80,000 operations”. The deep satisfaction of fine surgery, like the immense joy of midwifery and successes of her children (Penny, Amanda and Anthony), helped overcome the hurt of a broken marriage. She was divorced in 1964 and her former husband went on to become a prestigious private practitioner and was knighted in 1974.

“A long life of clinical and social service, revealing to me every shade of what Balzac called the human condition, was a stunning privilege from end to end” is how Dame Josephine concluded her memoirs in 1999.