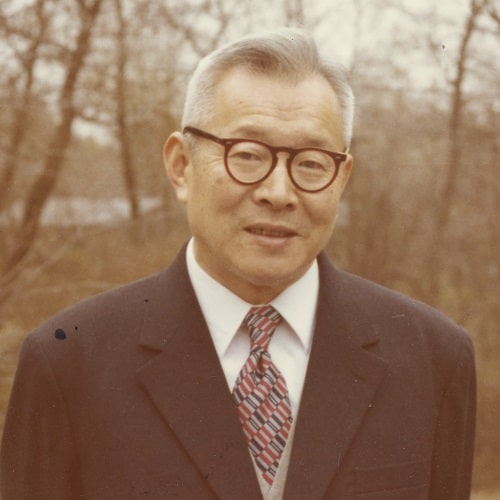 Chu Chi-Ming (Zhu Ji-Ming) was an internationally renowned virologist. He was born in Yixing, in the Jiangsu province of China, and graduated from Shanghai Medical College in 1939. He went on to complete a PhD at Cambridge in 1948. He was a research associate of the National Institute for Medical Research for two years, until 1950.

Returning to China, he was appointed chief of the second research laboratory, at the National Vaccine and Serum Institute, Beijing. He was later appointed deputy director and then director of the Institute of Virology of the Chinese Academy of Medical Sciences. From 1983 to 1987 he was president of the Chinese Society for Microbiology. In 1980 he was elected to the Chinese Academy of Sciences and in 1997 was made an honorary member of the American Society for Microbiology.

Early in 1940s, under Tang Feifan's direction, Zhu successfully developed lyophilized penicillin for injection with the seed strain he had isolated. He went on discover the filamentous form in the newly isolated type A flu virus and first proved that the virus could be variable and polymorphous. He found that the flu virus could be divided into two subunits - haemagglutinin and soluble antigens. Based on this research he put forward a structural analysis of the flu virus. This became the guide for the demonstration of the structure of the virus in the 1950s and provided the principles upon which a subunit vaccine was developed.

Since the period of his studies in the UK, Zhu Ji-Ming devoted himself to researching the variation in flu virus antigens. In 1949 he first demonstrated that, after occurring in one site, a qualitative change of flu virus' antigen will spread. In 1957 he again proved that the pandemic type A2 flu virus which emerged from China was a new subtype resulting from a qualitative change of antigen. This was the first big epidemic caused by a new subtype with virological proof. He used this research to put forward the idea of qualtitative and quantitative change of flu virus antigens. This is now commonly accepted by virologists all over the world.

While researching live flu vaccine, he found that flu viruses of different years attenutate, or weaken in toxicity and virulence, at variable rates. He invented two methods to gain live vaccine - the chick embryo passage method and the gene recombination method.

Zhu Ji-ming was always keen to keep up with international developments in virology. At the beginning of 1970s he reviewed the progress of global research and realised that the era of molecular virology was approaching. After visiting some American laboratories engaging in viral molecular genetics and gene engineering research in 1978 he actively proposed and supported gene engineering research in China and set up a specialised research laboratory at the Virology Institute. In 1981 he put forward two research directions for the laboratory - gene expression in cells of higher animals and virus as a vector of gene engineering. This marked his change of direction from classic to molecular genetics.

Hepatitis B has had a major impact on the health of the Chinese. In the 1980s it became clear that there was an increasing need for a new vaccine. Zhu undertook to research recombinant hepatitis B vaccine expressed by mammalian cells. After more than ten years work he and his colleagues finally succeeded, and the vaccine was put into routine production. In 1984 he directed research on gene engineering polyvalent vaccine vectored by vaccinia virus-Tiantan strain, with the aim of finding a vaccine which would prevent several diseases at once. Under his active direction, several strains of recombinant vaccine viruses were obtained and subjected to field trials.

From 1964 to 1974 he was elected to the Third National People's Congress and was a member, from 1978 to 1992, of the Fifth, Sixth and Seventh Chinese People's Political Consultative Conference.

Zhu Ji-ming valued his colleagues, trained scientific workers and stressed the importance of integrity. His scientific approach was rigorous and he successfully combined theory with practice. He was upright and lived simply. He was never motivated by fame or wealth. Zhu was not only a great scientist, but also a remarkable human being. He died in Beijing.