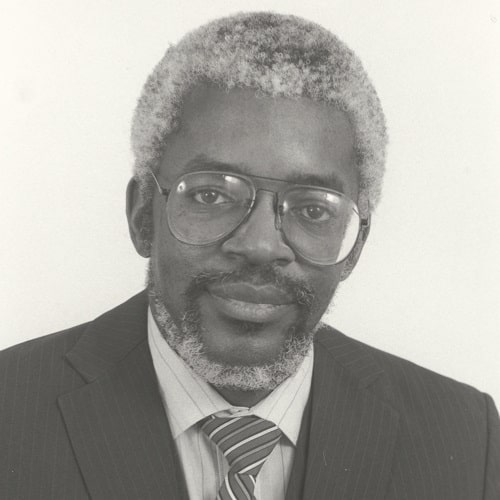 Charles Denbow was professor of medicine at the University of the West Indies. He was born in Georgetown, Guyana, the son of Claude Hicks Augustus Denbow, a dental surgeon and his wife Kathleen Maude née Griffith, who was a musician. His grandfather, the first Charles Egerton Denbow, was chief county sergeant major in the British Guiana Police Force – an unusually senior position for a black Guianese at that time. Charles’ father, Claude, also overcame predjudice when he left his job as a train conductor to travel to Howard University, Washington and qualify as a dentist.

Charles attended Queen’s College School in British Guiana and, after passing his GCE A levels in 1964, he taught there for a year as a junior science master. From 1968 to 1971 he was demonstrator in anatomy at the University of the West Indies. During this time he did a special anatomy course at St Thomas’ Hospital in London and was the only student that year to pass with first class honours. Qualifying in medicine in 1971, he became an intern and then resident in medicine. He was promoted to senior resident in 1975 and temporary lecturer in 1976. The Mayo Clinic offered him a fellowship in cardiology and he moved to the US in 1977, also working as an instructor in medicine at the Mayo Medical School in Rochester, Minnesota.

On his return to the West Indies in 1979 he proceeded to lecture in medicine – and particularly cardiology – at the University of the West Indies. He was appointed professor of medicine in 2000. Among other University posts were those of vice dean (clinical medicine), head of the department of medicine (1998-2004), chairman of the accreditation committee and of the faculty sub-committee on graduate studies. His academic work was largely concentrated on patient focused clinical cardiology and he published widely on new techniques such as intracoronary stent implantation, ambulatory echocardiography, balloon mitral valvuloplasty and percutaneous transluminal coronary angioplasty. He also wrote a history of cardiology in Jamaica and of medical education in the Caribbean.

He was elected a fellow of the American College of Cardiology in 1981, the first physician practising in Jamaica to be so honoured. Other international honours followed and he was visiting professor in cardiology in Atlanta, Georgia and external examiner for the final MB BS examination at Guy’s, King’s and St Thomas’s Medical School at the University of London in June 1999. He was a founding member of the Caribbean Cardiac Society and on the board of directors of the Association of Black Cardiologists, Atlanta. In 2008 the Jamaican government awarded him the Order of Distinction with the rank of Commander.

Apart from cardiology, he enjoyed music and was described as being ‘hopelessly in love with cricket’.

In 1977 he married Marjorie Mercella, a consultant anaesthetist and they had three children Charles Jr, Christopher Gordon and Kathryn. Marjorie predeceased him in 2006.