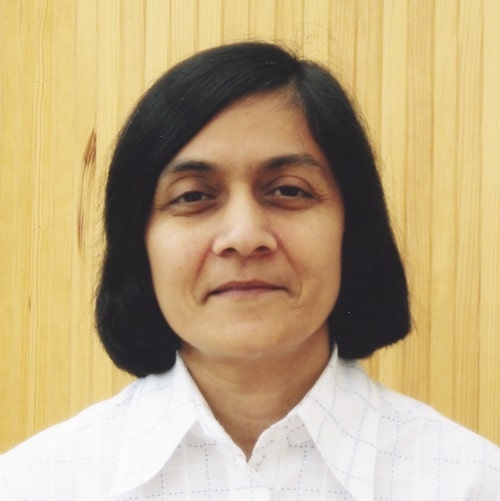 Bina Sardesai was a consultant physician in acute medicine at the Royal Cornwall Hospital in Truro. She was born Bina Parikh in Poona, India, the daughter of Ramanlal O Parikh, a doctor, and Snehlata R Parikh, a housewife. She studied medicine at the B J Medical College, graduating in 1980 with a MB BS with merit. In 1984 she was awarded her MD from the University of Poona and in the same year married Suhrud Sardesai, a doctor she had worked with at the neurology department of Sassoon Hospital in Poona.

Together they moved to England to gain further postgraduate experience. Bina passed the MRCP examination in 1987 and was appointed as a medical registrar to the Royal Cornwall Hospital Treliske in Truro, at the same time as her husband. It became clear that Bina was a gifted physician, combining intellect with understanding, and she gained a formidable reputation for hard work. During this time she formed a deep attachment to the coast and countryside of Cornwall and for the Cornish people.

However, in 1990 they decided to resume their careers in India and Bina was appointed physician with additional research sessions to the diabetic unit at KEM Hospital in Poona. She published her work in Metabolism (1997 Jan; 46[1]:1-4) and gave several international presentations.

In 1999 a new medical admissions unit was opened at the Royal Cornwall Hospital. Drawn back to Cornwall, Bina was appointed as a consultant physician. Her earlier reputation was enhanced, leading to high standards of care. Bina had recently been appointed as clinical director in acute medicine, was an examiner for the MRCP, and an exit examiner for the specialty of acute medicine.

A natural teacher, Bina took an increasing role in the Peninsula Medical School and was an educational supervisor for junior doctors. By nature reserved, she was never afraid to offer fair and constructive criticism, based on logic and clinical experience. She earned, and richly deserved, the trust and respect from all those who worked with her.

She was diminutive in stature, composed and thoughtful, with a wide range of interests. Born into a Hindu family, she did not practise any single religion, but felt that all the major religions reflected the core principles essential to human existence. Her daily life reflected these values, especially those of hard work and helping others. Bina read widely, particularly history. She spoke several languages, and was an accomplished pianist. She travelled widely with Suhrud, and they were gradually ticking off the World Heritage Sites. Bina loved Cornwall, and particularly enjoyed walking along the magnificent coastal path. Having settled on the outskirts of Truro, she took up gardening with the same enthusiasm she devoted to all her activities. Colleagues and friends will long remember her generous hospitality and wonderful cooking. Bina and Suhrud were complementary and it was always a pleasure to be in their stimulating and erudite company. I recall how Bina’s tiny frame would convulse with laughter at the many absurdities so frequent in hospital life.

Bina was writing a report at 2am on 21 August 2009 when she had a subarachnoid haemorrhage. Despite emergency neurosurgery and intensive care, she died ten days later. Her memorial service in Truro Cathedral was an extraordinary event, attended by family, friends and colleagues. Over 700 people celebrated her life in a unique service conducted by the dean. Members of six world religions (Christianity, Hinduism, Judaism, Buddhism, Sikhism and Islam) spoke of the core values of their individual faiths, demonstrating how Bina had upheld them all.

Bina achieved so much and was ready to achieve so much more. For her, life and work were equal joys, and for both she will be remembered, respected and loved.