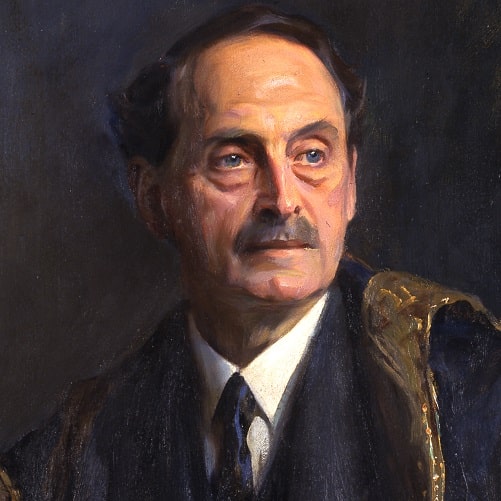 Bertrand Dawson was born at Croydon, the fourth son of an architect, Henry Dawson. He was educated at St. Pauls’ School and took the B.Sc. degree at University College, London, in 1888, before qualifying in medicine at the London Hospital two years later. Although he was for a few years pathologist and assistant physician to the Royal Hospital for Diseases of the Chest, it was on his experience of medicine and of men and women in the wards of the London Hospital that he founded his great career as physician and man of affairs. From resident appointments in the Hospital he was elected to its honorary staff as assistant physician in 1896; he became full physician in 1906, and, when the time came for his retirement, his active services were secured for another five years by his nomination as extra physician.

In his early years, Dawson’s special interest was in disorders of the alimentary tract, and he contributed articles on this and other subjects to Allchin’s Manual of Medicine. But his original writings necessarily declined as his practice increased and as he became involved in a wider sphere of activity, after his appointment as Physician-Extraordinary to Edward VII in 1907. He attended the King on his deathbed and in 1911 was created K.C.V.O. by George V, who confirmed him in his office and three years later made him a Physician-in-Ordinary. Henceforward, he was treated by the Royal Family not only as its medical adviser but as a trusted friend. He bore a heavy load of responsibility during the King’s illness in 1928, and in January, 1936, he wrote the celebrated bulletin announcing that "the King’s life is drawing peacefully to its close". He remained at the head of the medical households of Edward VIII and George VI and of Queen Mary.

On the outbreak of war in 1914, Dawson became commandant of the 2nd London General Hospital, which he had formed. Soon afterwards, however, he went out to France as consulting physician to the British Armies, with the rank of major-general. He was made an honorary member of the Army Medical Advisory Board, of which he was to be chairman two decades later, in 1936. In 1916 he instituted a special investigation into the origin of infective jaundice, which was causing much sickness amongst the troops. He was created C.B. in 1916, G.C.V.O. in 1918 and K.C.M.G. in 1919.

Even before the end of the War, Dawson had begun to call the attention of the medical profession and the public generally to the position of medicine in the "brave new world" to come. He was a leading member of the B.M.A. committee set up to formulate plans for the establishment of a Ministry of Health. His own proposals for a comprehensive health service were outlined in his Cavendish lectures of 1918, under the title of The Future of the Medical Profession, and one of the new Ministry’s first acts was to appoint him as chairman of the Consultative Council on Medical and Allied Services. The Council published in 1920 the "Dawson Report" which, although pigeon-holed at the time on grounds of economy, contained the seeds of the National Health Service introduced, after Dawson’s death, in 1948.

By now Dawson had emerged as a leader of his profession with broad views and a firm grasp of principles, and in 1920 he was raised to the peerage as Baron Dawson of Penn, being the first medical consultant to receive this honour while still engaged in active practice and teaching. He regarded the distinction as an invitation from the State to the medical profession to take a larger share in the national life, and henceforth raised his voice in the House of Lords on many topics on which he could bring his considered judgment to bear — on subjects so varied as birth control, municipal hospitals, vivisection, osteopathy, the pasteurisation of milk, insanity as a ground for divorce, infanticide, physical training, the Beveridge report, scientific research, the National Health Service white paper. Dawson was made a K.C.B. in 1926, a privy councillor in 1929, and a viscount in 1936.

Outside the House, in addition to his rounds at the London Hospital, to consulting appointments at Midhurst and Ventnor, to a private practice that embraced men famous in all walks of life, Dawson found time for a multitude of activities. He was president of the Royal Society of Medicine from 1928 to 1930, a member of the Medical Research Council from 1931 to 1935, president of the B.M.A. in its centenary year, 1932, Senior Censor and then, from 1931 to 1938, President of the Royal College of Physicians. Under his influence the College became more representative of the profession by the election to the Fellowship of men from its specialist branches, from public health and from the Services and by his encouragement of the younger Fellows to take part in College affairs. Committees were formed to co-ordinate research in particular fields, to follow new developments in medicine, to review wide issues such as medical education. The College, in his view, should not play a lone role in these matters but should work in close co-operation with the two other Royal Colleges. Indeed, towards the end of his life, he visualised an Academy of Medicine which would represent their united interests.

When war came again in 1939, Dawson at once occupied himself with the organisation of the Emergency Medical Service. Despite his advanced age, he allowed himself no relaxation, and in 1943 he added to his burden by again accepting the presidency of the B.M.A. Once more, talk of a National Health Service was in the air, and the profession as a whole felt that Dawson was best qualified to speak for it. Again he welcomed the idea of such a service. But, he said, "customs, habits and feelings, many of them centuries old, must not be suddenly uprooted: rather must the new order be gradually grafted on to medicine’s historic past. Such is our English way".

These words, Dawson’s Tamworth Manifesto, expressed his philosophy in general; not only for the introduction of a health service, but for the accomplishment of reforms of all kinds, did he advocate gradual methods. They go far to explain, moreover, his success in life. For Dawson represented the viewpoint of the average Englishmen of the period. On occasions, he might appear to be ahead of his time, as when, in 1921, he chose to advance progressive views on birth control and the sex relationship from the Church Congress platform, or when, in 1932, although a loyal churchman, he dared to criticise the restrictive spirit of many Church dignitaries from the pulpit of Liverpool Cathedral. Yet, in these instances, Dawson, if out of harmony with the authorities, was, perhaps, in agreement with the majority of his countrymen.

Dawson understood his countrymen because he treated all men, whether dukes or dustmen, with the same sympathy and the same respect. His unselfishness and his humility are exemplified in a hundred stories of his dealings with patients of every social class. And with his qualities of humanity, he matched, in the words of the Lancet, "a greatness of general ability rather than some particular excellence: in many ways, he was a shade better than the average first-class man". His whole career was moulded by a legitimate ambition to succeed and leavened by an unfailing capacity to enjoy life. He owed his success not least to his wife and three daughters, as he frequently acknowledged. He married in 1900 Ethel, daughter of Sir Alfred Yarrow, marine engineer and later a generous benefactor to the London Hospital. Dawson died at his temporary home in Weymouth Street, London, having twice changed his address on account of air-raid damage. He had preserved his strikingly handsome appearance, his dark hair, and his brisk upright carriage to the end of his life.