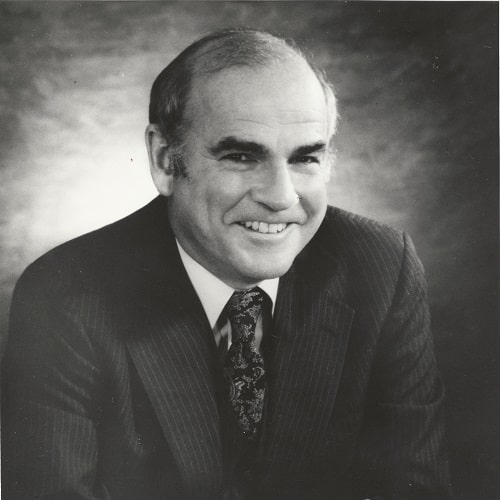 Baruch Samuel (‘Barry’) Blumberg was the geneticist who discovered the hepatitis B virus thus paving the way for the invention of a vaccine which saved countless lives. Joint winner of the 1976 Nobel prize in physiology or medicine, he was an extraordinary man whose work moved across the fields of virology, immunology, anthropology and genetics.

Born in New York City, he was the son of Meyer Blumberg, a lawyer, and his wife, Ida. His grandparents had emigrated to the USA from Europe at the end of the 19th century and he received a rigorous Jewish education alongside the secular one. After attending the yeshiva of Flatbush elementary school and Far Rockaway high school (where he won the science prize for making a working refrigerator from scrap parts), he enlisted in the navy in 1943. While serving he took a physics degree at Union College, Schenectady, New York. He ended his navy service as commander of a landing craft and later wrote that ‘sea experience placed a great emphasis on detailed problem solving, on extensive planning before action, and on the arrangement of alternate methods to effect an end. These techniques have application in certain types of research, particularly in the application of field studies.’

Demobilised in 1946, he went to Columbia University in New York to study mathematics. The following year he switched to medicine and enrolled in the College of Physicians and Surgeons of Columbia University. Between the third and fourth years of his course he spent several months at Moengo, which was an isolated mining town in the Surinam (then known as Dutch Guyana) rain forest. While there he delivered babies, treated patients in isolated villages and undertook the first health surveys in the area. When he examined the data he became intrigued by the different reaction of various nationalities to the hazards of life in the tropics and wrote that ‘Nature operates in a bold and dramatic manner in the tropics. Biological effects are profound and tragic.’ It was his investigation of this phenomenon that was to lead to his most important discovery.

After gaining his MD in 1951, he embarked upon an internship and residency at Bellevue Hospital in New York. Again, this was an experience that was to profoundly affect his future life as he was very moved, in the two years that he spent there, by the appallingly overcrowded conditions in which those who could not afford to pay for their medical care were treated. He wrote that ‘scenes on the wards were sometimes reminiscent of Hogarth’s woodcuts…of 18th century London.’

In 1953 he embarked on two years as a clinical fellow at Columbia Presbyterian Medical Centre and then came to the UK to do a PhD at Balliol College, Oxford on the physical and biochemical aspects of hyaluronic acid. While there he visited Nigeria to take blood samples from various different groups and continue his research into why different ethnic groups react differently to disease.

On his return to the US in 1957, he joined the staff of the National Institutes of Health as head of the geographic medicine and genetics division, leaving in 1964 to become associate director for clinical research and vice-president for population oncology at the Fox Chase Cancer Centre in Philadelphia. Throughout these years he had examined thousands of blood samples and managed to identify a mysterious substance found in the blood of a native Australian that reacted with an antibody in the serum of an American haemophiliac. He proved that the virus, christened the ‘Australian antigen’, was the cause of hepatitis B. At first virologists failed to take his work seriously, regarding him as a ‘mere biochemist’ but his findings were corroborated by others. Subsequently Blumberg (with his colleague Irving Millman) devised a test, which blood banks began using in 1971, to screen donations and the incidence of hepatitis B infection dropped by 25%. The two next proved evidence of the connection between hepatitis B and liver cancer and developed a vaccine.

Although it was regarded as the first vaccine capable of preventing a human cancer – since liver cancer is usually a long term consequence of hepatitis infection - they found it difficult to get a drug company to invest in it. Eventually Merck and Co agreed to manufacture the vaccine and it became commercially available in 1981, after which time the chronic infection rate among children in, for example, Taiwan, dropped from 15 per cent to less than one per cent. For his work on the origins and spread of infectious viral diseases, Blumberg was jointly awarded the Nobel Prize with Carleton Gajdusek in 1976. He later wrote that the saving of lives was what drew him to medicine and commented ‘there is, in Jewish thought, this idea that if you save a single life, you save the whole world, and that affected me.’

The following year he was appointed professor of medicine and anthropology at the University of Pennsylvania and continued to teach medical anthropology there for many years. From 1983 to 1984, he was visiting professor to Balliol College, Oxford and returned in 1989 to become their first master of American nationality and also, as he pointed out, ‘the first scientist…..with the possible exception of an alchemist who served in the 14h century.’ He thoroughly enjoyed the five years he spent as master, a position he described as having ‘no power but a great deal of influence’.

In 1995 he returned to his post in Pennsylvania and, four years later, was appointed director of the US National Aeronautics and Space Administration (NASA)’s Astrobiology Institute in California. He stayed there for three years, until 2002, overseeing research into the origins, evolution, distribution and future of life on earth and elsewhere, although he said that he doubted space exploration would reveal much more than an unknown virus or bacterium and ‘that would be astounding enough’.

Among many honours and awards he was elected to the National Academy of Sciences, the American Philosophical Society – of which he was elected president in 2005 – and the National Inventors Hall of Fame. He wrote several books including Hepatitis B: the hunt for a killer virus (Princeton, NJ: Oxford, Princeton University Press, 2002) and 500 scientific papers, the last of which Astrobiology, space and the future age of discovery (Philos Trans A Math Phys Eng Sci, 2011, 369, 508-15) was published two months before he died.

In 2003 he was interviewed on the radio programme Desert Island Discs and a recording is held in the National Sound Archive.

He was a keen film fan and his other hobbies included carpentry and photography An energetic man, he enjoyed running, canoeing and mountain walking – travelling via New Zealand when he was 70, he and his wife walked the famous Milford Track. A regular squash player, he also loved cycling and recalled how his favourite memories of Balliol were cycling in the ‘wonderful Oxfordshire countryside…enclosed in a water resistant outer layer’ in all seasons. Joint owner of a beef farm in western Maryland he claimed that shovelling manure was ‘an excellent counterbalance to intellectual work.’

In 1954 he married Jean née Liebesman, whose father, George, was a businessman. She was an artist and shared his interest in medical history. Together they published an article - ‘Bernard Connor (1666-1698) and his contribution to the history of ankylosing spondylitis’ (J Hist Med 1958, 13, 349-66) - on the Irish physician, Bernard Connor, an early licentiate of the RCP, and named their second son after him. They had four children, Ann, Jane, George and Noah, and nine grandchildren. His younger daughter, Jane, is married to Mark Thompson, the former director of the BBC and one of the UK’s most prominent Roman Catholics.

His wife and family survived him when he died, apparently of a heart attack, shortly after giving a keynote speech at a NASA conference at the Ames Research Center in San Francisco.