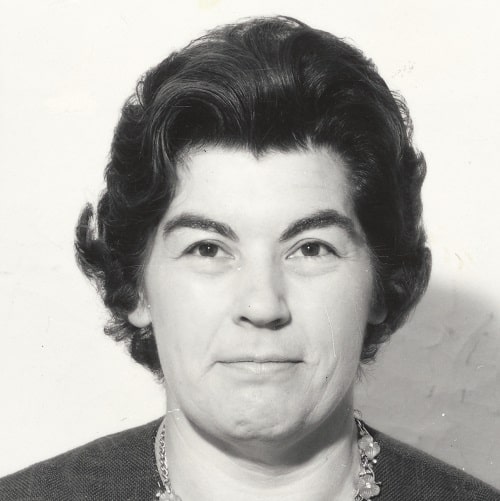 Barbara Ansell was a pioneer in the development of paediatric rheumatology as a recognised sub-specialty in the UK. Her approach to children exemplified that overworked word 'holistic': she tackled all the problems that the children - and their families - presented, making friends with all of them.

She was the daughter of Herbert Joseph Ansell, one time mayor of Warwick, and was educated at the King's High School for Girls in Warwick, where she won a Queen's Scholarship. She went on to Birmingham University medical school, qualifying with a distinction in surgery.

She was appointed as house officer to John McMichael [Munk's Roll, Vol.IX, p.341] at the Postgraduate Medical School in Hammersmith before moving to the Canadian Red Cross Memorial Hospital at Taplow. Apart from a spell as senior registrar at Hammersmith she worked at Taplow or at its successor hospitals for the remainder of her career.

She was promoted to consultant in 1962 and, together with the director of the special unit, E G L Bywaters, she set about a comprehensive programme of research into childhood chronic arthritis. The first task was to differentiate the various kinds of arthritis. At that time these were grouped together as Still's disease or later as JRA (juvenile rheumatoid arthritis). But as clinical and laboratory observations continued it became clear that children could suffer juvenile forms of other kinds of adult arthritis.

Ansell's incredible memory for the details of all the children she had looked after, together with Bywaters' meticulous observations and records of the clinical, radiological and pathological manifestations of these diseases, led in 1959 to a classification of the various forms of chronic arthritis in children. The American Rheumatism Association and the World Health Organisation adopted it with minor modifications.

Research she published showed that the tendency for corticosteroids to cause stunting of growth in children could be avoided as long as the drug was given on alternate days. With Bywaters, she showed that the outlook for survival in amyloidosis (a leading cause of death in juvenile chronic arthritis), was much improved by treatment with the anticancer drug chlorambucil.

A therapeutic pool was built at the hospital. This, combined with the use of newer drugs for pain control, helped many children to regain movement without surgery, the warm water supporting their limbs and easing their pain.

For those neglected cases where the stiffening and distortion of limbs were already too severe, surgery was pioneered in conjunction with orthopaedic surgeon George Arden. By 1975 Arden had operated on and replaced over 190 damaged hips. In some children both hips and both knees had to be replaced. The combined work of Ansell and Arden culminated in 1978 in the publication of their book The surgical management of juvenile chronic polyarthritis (London, Academic Press).

In 1955 the special unit had been taken over by the Medical Research Council, thus ensuring its continued financial support. It was the policy of the Council to close its units when the director retired. Bywaters did retire in 1975 and the hospital did not long continue after the loss of its special unit and the construction of a completely new hospital at nearby Wexham Park. Ansell continued her work at Northwick Park and Wexham Park Hospitals.

The legacy of the special unit resides in the many doctors from the UK and overseas who were trained there and who in their turn set up specialist units for juvenile rheumatism. By the turn of the century there were thirty such units in the UK.

In the course of her work she was honoured in many countries, served on committees looking after the interests of crippled children and published many contributions to textbooks and reviews.

Barbara Ansell was married to a medical colleague, Angus Weston, who predeceased her.