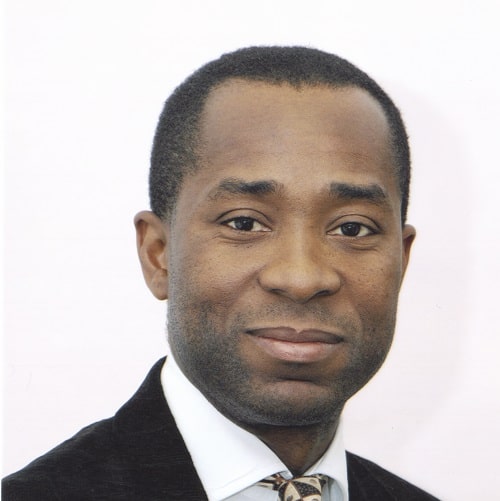 Adebayo Babajide Olujohunbge, known as ‘Ade’, was an associate professor in the department of internal medicine at the University of Manitoba, Winnipeg, Canada. Diagnosed at an early age with sickle cell disease, Ade chose to not only become a doctor, but devoted his life to combating and containing the disease. He was born in Ibadan, Nigeria, the son of Chief Olu’funsho Olujohungbe, of the United Nations Economic Commission for Africa, and Olabisi Olujohungbe née Owo. He attended primary school at Sacred Heart, Ibadan, where he was always top of his class, and went on to King’s College, Lagos, and Oyemekun Grammar School, Akure. He then studied medicine at University College Hospital, University of Ibadan, qualifying in 1985.

He then rotated through several senior registrar posts in haematology in the Manchester area, beginning at the National Blood Transfusion Service, and continuing at the University Hospital of South Manchester, Manchester Royal Infirmary, Royal Manchester Children’s Hospital, and at North Manchester General Hospital. For the first six months of 1999 he was a visiting fellow at the molecular haematology unit at the Medical Research Council’s Institute of Molecular Medicine at the John Radcliffe Hospital, Oxford, where he investigated some genetic markers which may predict the clinical severity of sickle cell disease. In 1999 he was awarded a PhD from University of Birmingham for research on multiple myeloma.

In August 1999 he was appointed as a consultant haematologist at University Hospital Aintree NHS Trust and, from 2004, as an honorary lecturer at the University of Liverpool. In 2009 he was recruited to CancerCare Manitoba with an academic appointment as an associate professor in the department of internal medicine at the University of Manitoba. In 2011 he was the co-recipient, along with Sabine Mai, of the first Myeloma Canada research grant.

He handled his own sickle cell disease with a quiet grace and, while often in pain, he never asked for any special favours. He was a passionate and caring human being with an unwavering commitment to his patients.

Outside medicine, Ade enjoyed cricket, table tennis, football, reading, travelling and music. In 1994 he married Danita Wilmott, a health visitor. They had two children – Funsho James and Olivia Floasade. Ade died at the Health Sciences Centre, Winnipeg, and was survived by his wife, children, siblings and wider family.