Nipple shields, tongue scrapers and spoons. Lots of spoons. Cecil Symons was a physician and cardiologist who collected many odd and fascinating artefacts that now call the RCP home.

The Symons collection is housed in the RCP's Treasures Room, a space especially designed by architect Sir Denys Lasdun. Although Dr Symons did not confine his collection items to one era – or even to one country – his collection shows an enthusiasm for the Georgian period (1714–1837). Medicine was the focus of considerable attention during this rumbustious age, with vigorous cartoons and illustrations revealing a lot about medical practice. After Symons’ death in 1987, his wife Jean Symons, with the help of Elisabeth Bennion, catalogued the extensive collection Cecil had acquired. 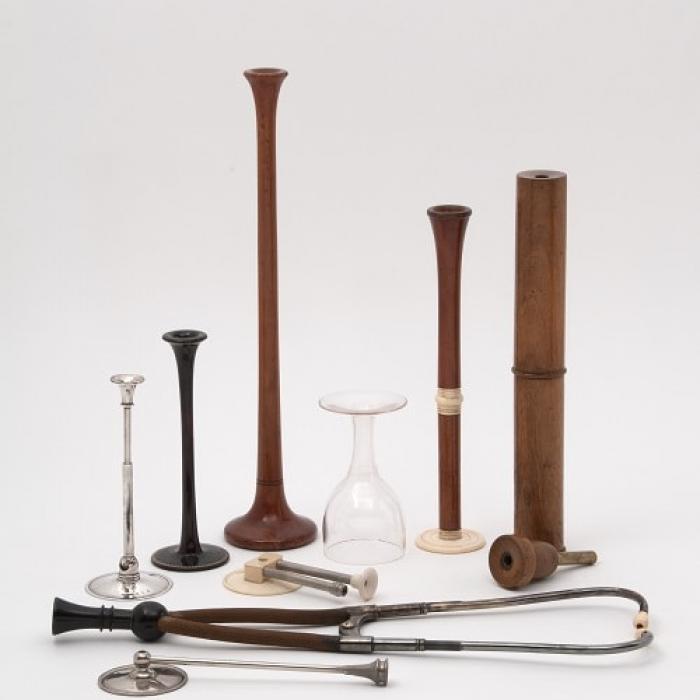 Nipple shields
Nipple shields have been used by breast-feeding women to ease discomfort since the 16th century. The nipple shields in the Symons collection are made from a variety of materials including silver, ivory, glass, wood, leather and even lead – not very good for babies! There are also modern examples of nipple shields. These show that while the material they are made from may have changed, the design has not.

Pap boats
Pap boats were used to deliver semi-liquid food to infants and those who were unwell. Pap was usually a mixture of bread, flour, milk or water, with some recipes adding beer or drugs to ‘soothe’. Three of the pap boats in Cecil's collection were owned by Lord Cohen (1900–1977), a fellow of the RCP.

Feeding cups and posset cups
Feeding cups were used for people who needed help drinking, as were posset cups. Posset was a hot drink containing milk, spices and wine or ale. Two of the cups in the Symon’s collection are for travelling, one with a demountable handle and spout and another which is wicker covered, resembling a thermos flask.

Sick syphons
Sick syphons are similar to drinking straws and could be clipped onto a cup to help people drink. However, due to the shape and small holes, they were impossible to clean and were thought to be potentially lethal! 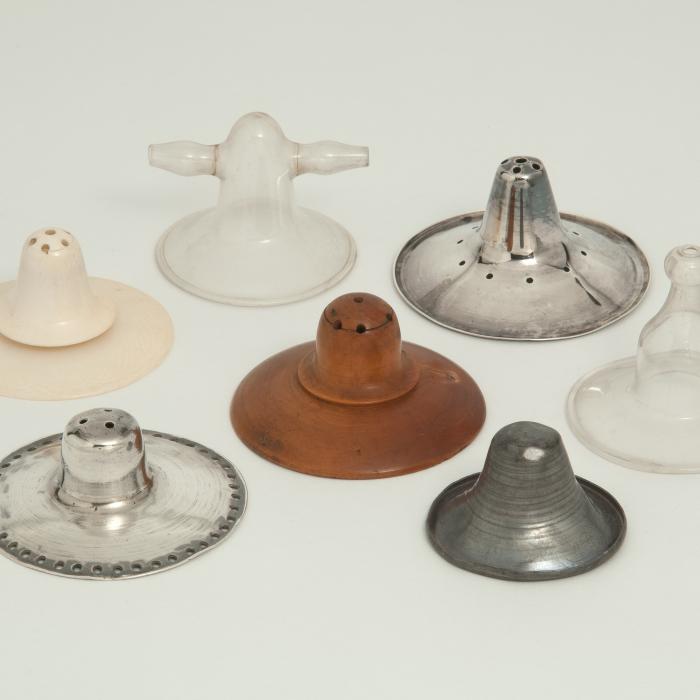 There is a great variety of spoons in the collection, ranging from early feeding spoons, teaspoons and castor oil spoons to double-ended spoons, some of which could be folded for travelling. A clever French invention has two compartments, the first for medicine and the second for something to sweeten the dose. Such devices helped make unpleasant medicines more palatable.

Spoons for castor oil are often called Gibson spoons because they were inscribed by the silversmith 'C Gibson inventor'. However, they were in fact invented by a fellow of the RCP, Dr Anthony Todd Thompson. These spoons have a covered bowl and hollow stem, so when the thumb is moved from the end of the stem, the contents are forced down rendering the castor oil tasteless.

A silver spoon in a shagreen case made in 1755 inscribed ‘gift of the Dutchess of Queensberry to Lady Carbery’ is especially interesting. Cecil hoped further research might reveal whether the teaspoon preceded the medicine spoon or vice versa. One of the earliest spoons, from 1680 is a silver feeding spoon with a long spout and trefid end pricked with the initials I.A.S.

The selection of tongue scrapers in the Symons collection is thought to be the largest anywhere. These fascinated Dr Symons because of the shapes and the variety of materials from which they were made. One example was found by his wife, Jean Symons on a visit to India. Jean saw pilgrims at Benares using twigs from the neem tree to clean their teeth and then splitting them for tongue scrapers – exactly in the way the original scrapers had been formed. 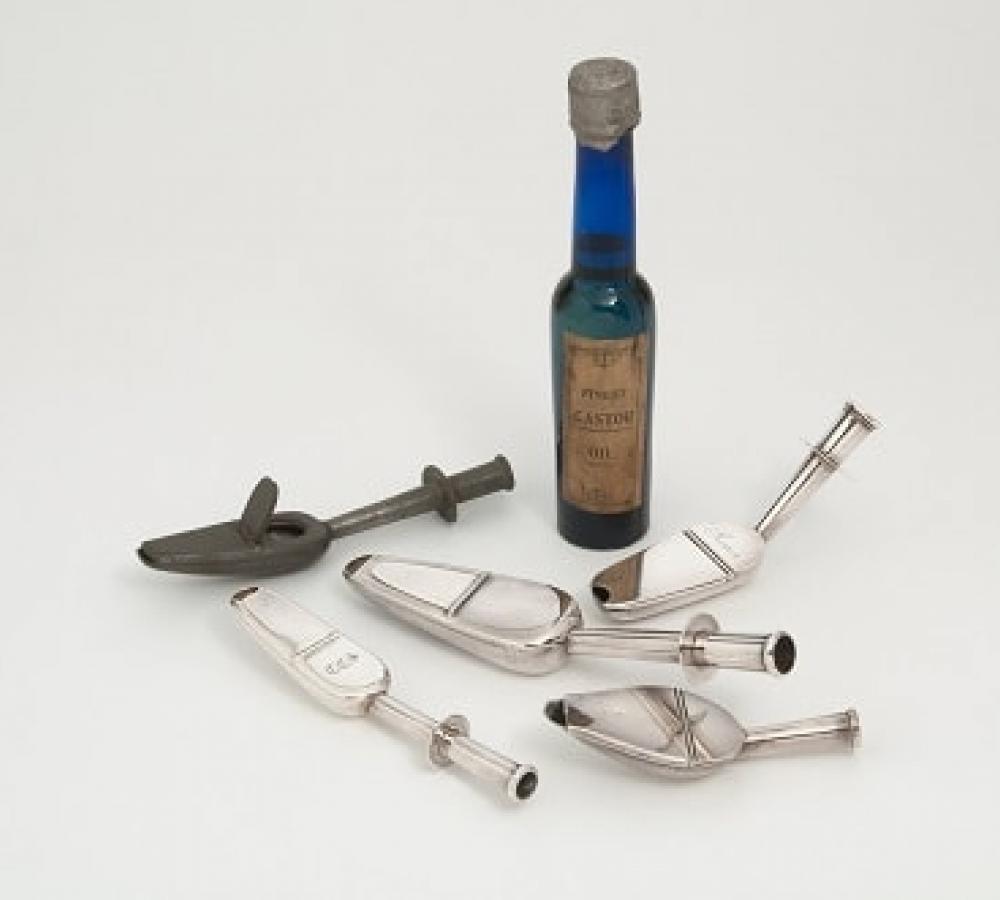 Caster oil spoons next to a caster oil bottle from the Symons collection, 19th century 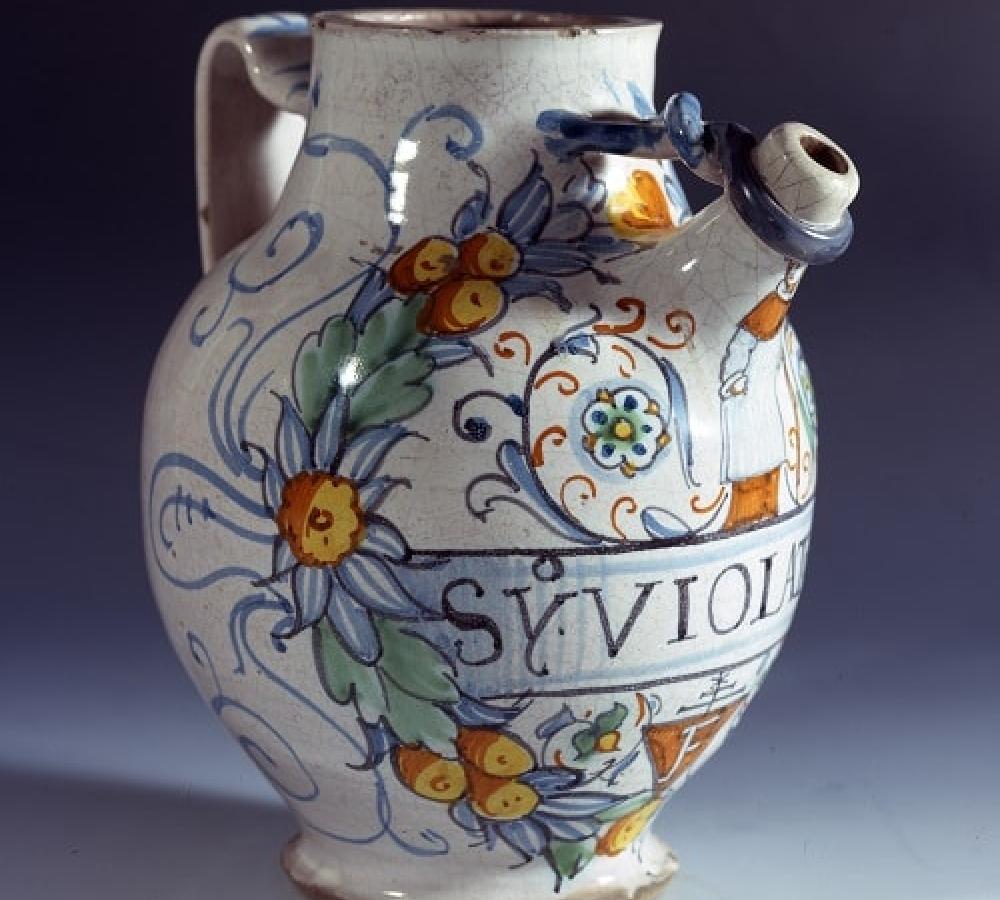 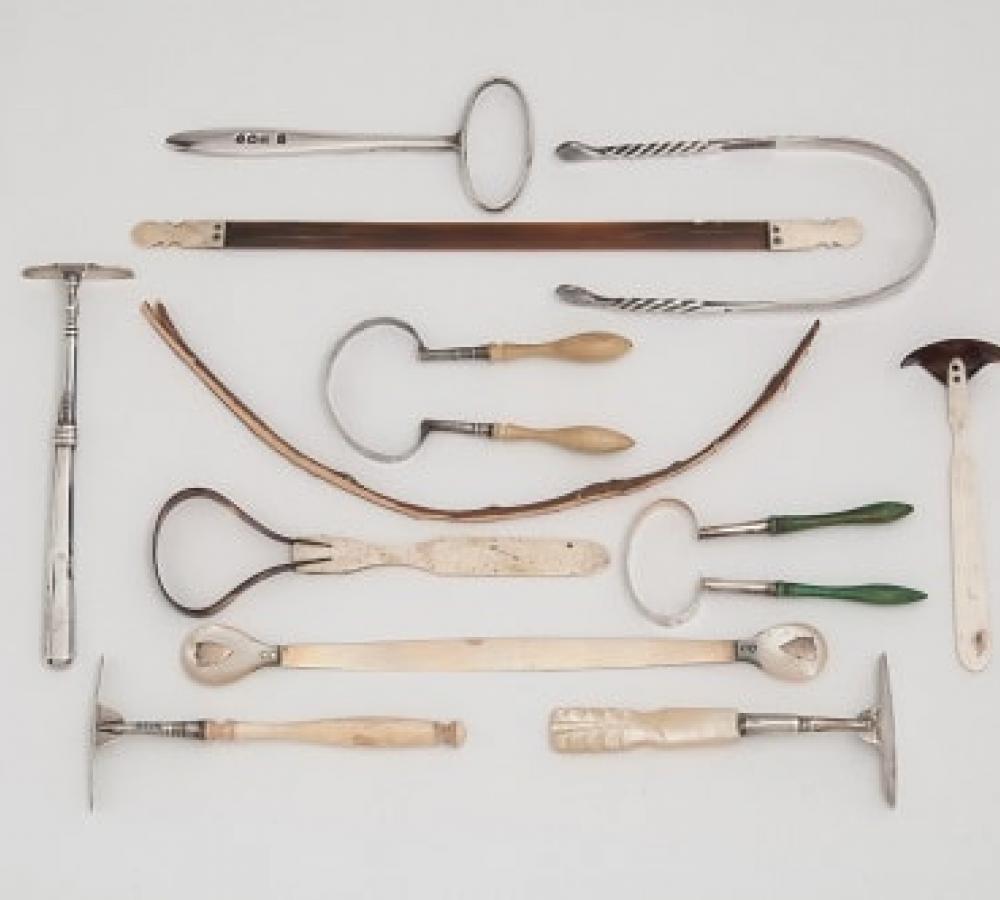 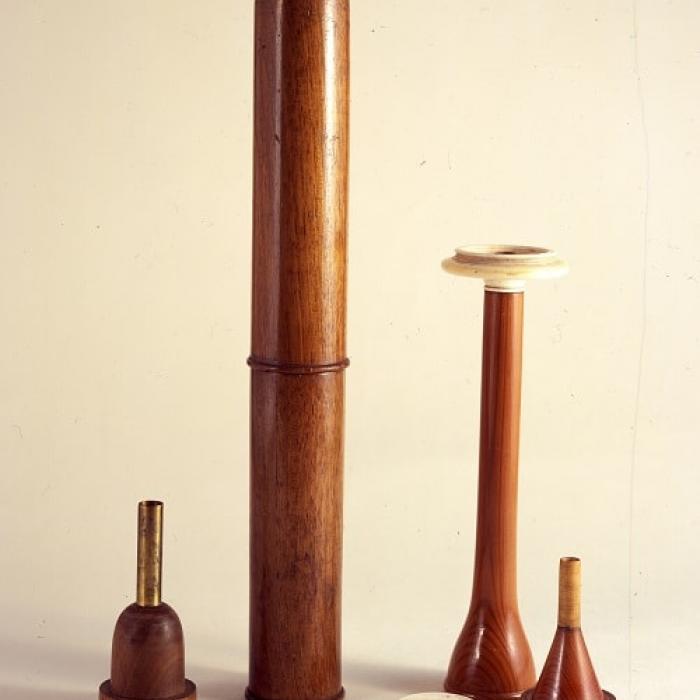 Extra-long stethoscopes were used in slums, workhouses and public hospital wards to keep the doctor away from fleas and lice which might live on the patient. Pictured left hand French 1820 and right hand English 1840.

Extra-long stethoscopes were used in slums, workhouses and public hospital wards to keep the doctor away from fleas and lice which might live on the patient. Pictured left hand French 1820 and right hand English 1840.

The handle was turned to produce an electrical charge which was transferred to the two handles held by the patient. Instructions in lid. Electricity (or galvanism) was used for medical purposes from the mid-eighteenth century onwards.

The handle was turned to produce an electrical charge which was transferred to the two handles held by the patient. Instructions in lid. Electricity (or galvanism) was used for medical purposes from the mid-eighteenth century onwards. 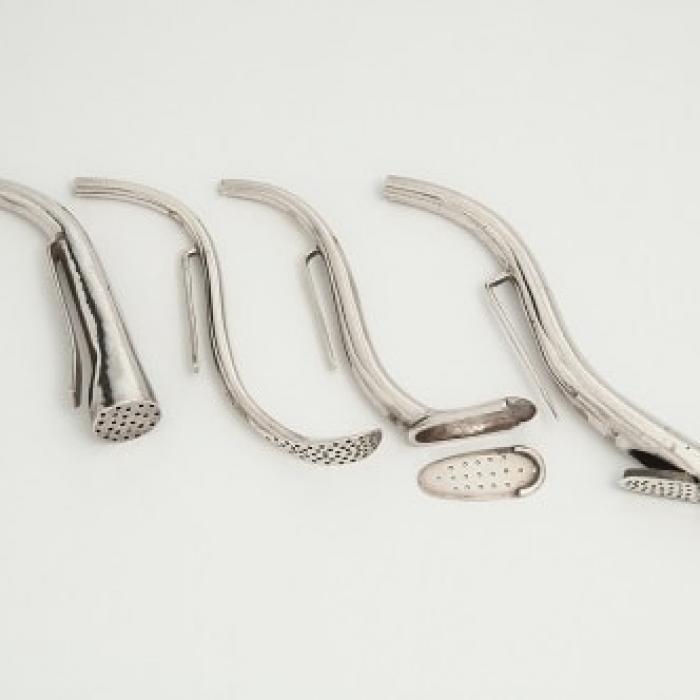 Designed for feeeding, the syphon's clip was attached over the rim of a cup so an invalid could then suck up liquid and strain out any lumps. They were almost impossible to clean properly and would have been a serious source of infection.

Designed for feeeding, the syphon's clip was attached over the rim of a cup so an invalid could then suck up liquid and strain out any lumps. They were almost impossible to clean properly and would have been a serious source of infection.

Bleeding was a popular ‘cure’ for many complaints until the 19th century. The Symons collection contains many examples of the once popular bleeding methods.

Lancets and scarificators were used to make incisions for bloodletting. A cupping glass could be used in conjunction with a scarificator. It was heated over a flame and then quickly placed over the wound. As the glass cooled, the reduced pressure drew blood into the glass – a practice known as ‘wet cupping’. Lancets were carried by physicians in elegant cases made from various materials. There are also three bleeding bowls within this collection, which were used to collect the blood. Two of the bowls are graduated to measure the amount collected, and one is inscribed 'St B H' which may stand for St Bartholomew's Hospital in London. Blood extraction using leeches was a very popular treatment in the 19th century and they were kept in jars and carried to patients in special leech boxes.

Stethoscopes
Stethoscopes were invented by French physician Réné Théophile Hyacinthe Laënnec in 1816. When he was examining a patient he rolled up sheets of paper to create a cylinder through which to listen to the heart and found that the tube amplified the sound. Stethoscopes on display include examples by Laënnec and Piorry and an elegant Neapolitan model made of tortoiseshell and gold in its original case. There are also folding stethoscopes, including one made of silver which was designed to fit into the top hat of a visiting physician.

Sphygmograph
A sphygmograph de Marey was an instrument used to measure blood pressure in the mid-19th century. The case is marked ‘W. Broadbent’, after Sir William Broadbent, a fellow of the RCP and physician to King Edward VII.

Pulseometer
An early pulseometer, ‘Dudgeon’s polygraph’ recorded the pulse onto a paper trace. This ‘pulse wave’ record was then used to diagnose certain cardiovascular disorders. 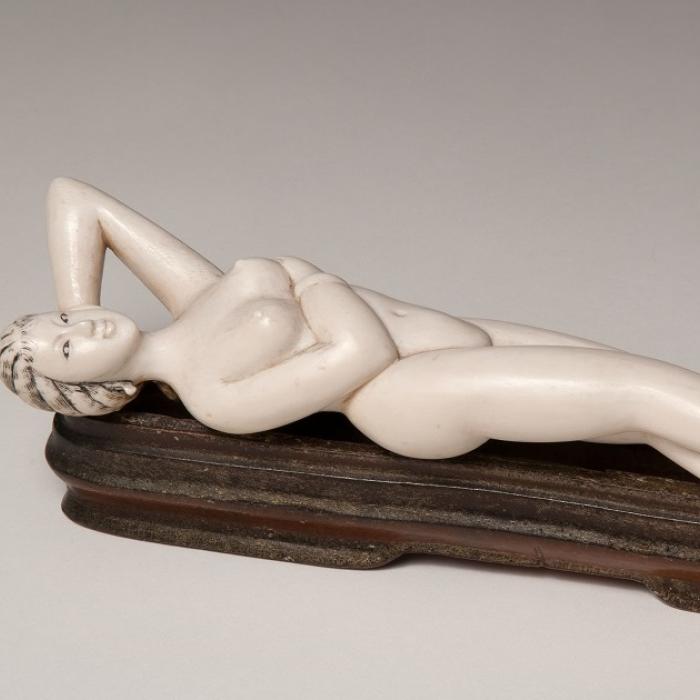 Diagnostic doll from the 19th century

Mixed within the collection, Symons included some more obscure items. Among them, a set of 18th century guinea scales used by a physician to weigh his fee (an important part of a physician's equipment). A Chinese medicine doll used by women to indicate what and where their symptoms were, political buttons that showed Louis XIV before and after having an enema, an ear trumpet and a pillbox that belonged to Charles I were also among the mix of items in the Symons collection.

Come and visit the RCP to see the objects, or find out more about the different items in the Symons collection catalogue.

Keeping up appearances: Self-care in the Symons collection

Items from the RCP Symons collection of medical objects illustrate some hygiene habits from the past.